While this year's Cowboys defense is performing much better than most experts have predicted, if there was one area that may need to be fixed, it would seem to be defending the tight end.

The Dallas Cowboys have been playing better defense in 2014 than was widely predicted. Even so, there is one area that continues to be trouble, covering the opposing tight end. Is it blown coverages? Mismatches in speed and size? Or maybe the Cowboys are just deficient in talent and experience. We take a look at a few plays to see what is really going on.

GAME ONE: SAN FRANCISCO AT DALLAS

In the first game the Cowboys played was against the San Francisco 49ers, and the match-up problem was tight end Vernon Davis. 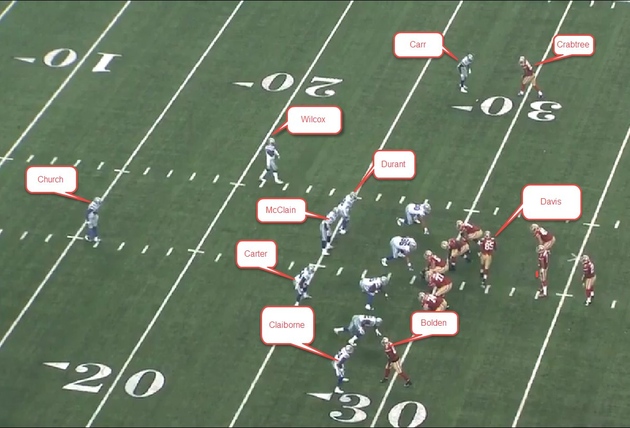 In Fig. 1 above, Davis is in motion and J.J. Wilcox is coming down in the box to pick him up. The corners appear to be in man coverage (The reason I say appear to be in man coverage is that we can't always be sure because we don't know what was called in the huddle). In this example, Wilcox makes you wonder if he got mixed up and thought it was zone as you will see below.

At the top of the screen we see that Brandon Carr has Michael Crabtree and at the bottom of the screen Morris Claiborne has Anquan Boldin. One of the things you will see a smart cover corner do is play with outside leverage such as Claiborne has with Boldin. This outside leverage allows the corner to see his man, the quarterback, and the ball in flight if thrown before the corner turns to run with the receiver. Because of where Carter is playing, Claiborne isn't too worried about the slant so he can play the outside leverage technique without much worry.

Notice that the offense is in their "12" package so the defense stays in their base 4-3 defensive set, with Bruce Carter, Rolando McClain, and Justin Durant as the three linebackers, and Barry Church and J.J. Wilcox as the safeties. 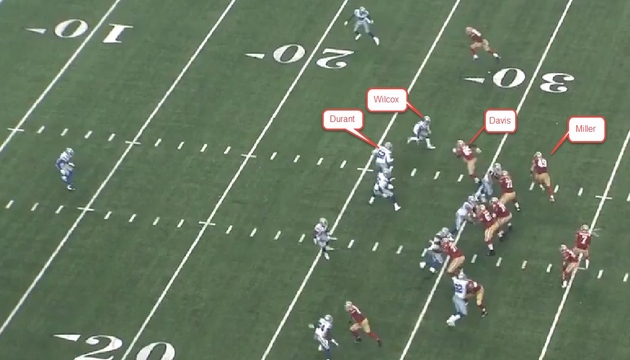 In Fig. 2 above, we see that as Wilcox picks up Davis, Bruce Miller is flaring out towards the sideline. Often if in man coverage the linebacker will pickup the first back out of the backfield, so Durant should be letting Wilcox know that he has Miller. But instead, Durant and Wilcox take Davis and leave Miller open and alone. The "Wilcox Zone" drawing below in Fig  3 is only shown as an example of one of the disadvantages of zone when you "flood" the zone with two or more players. Durant should be well on his way to cover Miller but he isn't and he just stops after Davis clears out. Both Durant and Wilcox are out of place if everyone is indeed in man coverage. Maybe Wilcox thought that Durant was supposed to stick with Davis, and so he hesitated as he wondered if he was supposed to take Miller? 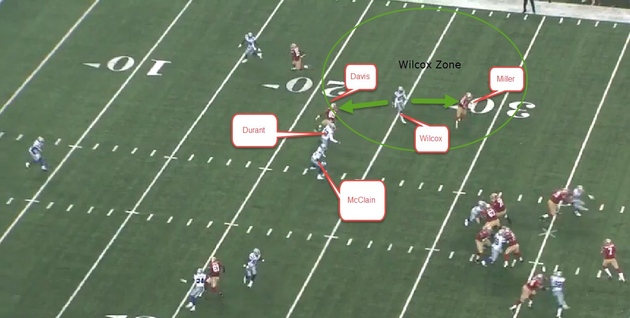 If Wilcox believes he is responsible for a zone, or if they are in zone, then as we see in Fig. 3 above Wilcox has a real dilemma on his hands because there are now two guys in his zone. However, since Wilcox continues to back-peddle with Davis (see Fig. 4), this leads to the belief that Wilcox was supposed to be in man coverage.

In Fig. 4 above we see that after dropping another five yards, Wilcox suddenly stops and lets Davis go. Perhaps he forgets he is in man and therefore momentarily is worried about Miller. He should be focused on not letting his man get behind him because that violates a basic tenet of "most dangerous man" who at this time is definitely Davis.

At the same time, Church should be moving toward Crabtree so Carr can release him and go get Davis, since Wilcox has blown this coverage. McClain is spying the quarterback Colin Kaepernick and Durant strangely stays home as well which seems to indicate that he was more worried about Kaepernick running with the ball than he was about leaving Miller open at the top of the screen for a possible very nice gain.

The tight end coverage on the touchdown in the first game was definitely a problem, perhaps it was because Wilcox is only in his second year and therefore it had more to do with Wilcox' lack of experience rather than ability or size-speed mismatch.

In the second game, the Cowboys played against the Tennessee Titans, and the match-up problem was tight end Delanie Walker. 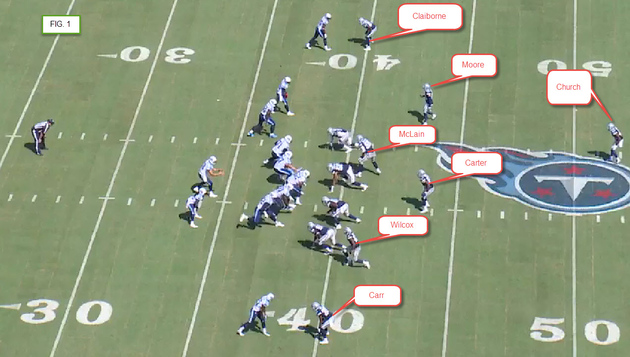 In Fig. 1 above Walker has motioned from the right side of the line and set up on the left side. Wilcox did not go with him, so this is the first indication we have that the defense was in zone coverage, even though it would seem that both Carr and Claiborne are in man coverage and Church is in single high safety (Cover 1). Moore has been tasked to take either the tight end or the slot receiver depending upon what they each do. 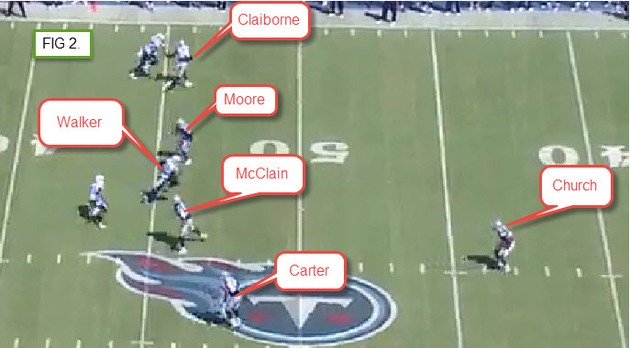 In Fig. 2 above, notice that Walker splits Moore and McClain, causing each to wonder who has who. In this case, Moore is closer to Walker so he should take him and let McClain take the guy underneath. 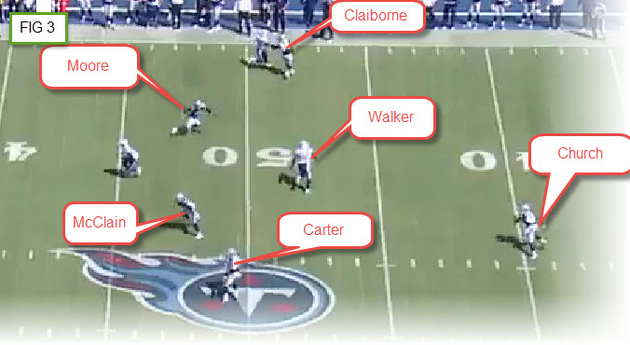 In Fig 3 above McClain is staying with the underneath receiver, while Moore has realized that he let Walker get behind him and is now looking back at the quarterback to see what he is going to do. Claiborne has his man covered very well and Church is trying to get over and initially takes the wrong angle by going down hill. 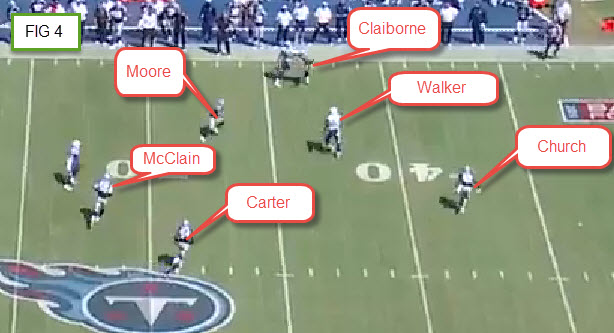 In Fig 4 above we see Church rerouting his angle by flattening it out and Moore is trying to catch up to Walker. This is actually not a very good pass as you are having a second receiver going into an area that the intended receiver is heading into, and this will allow Claiborne to have a shot at intercepting the pass if he is paying enough attention. 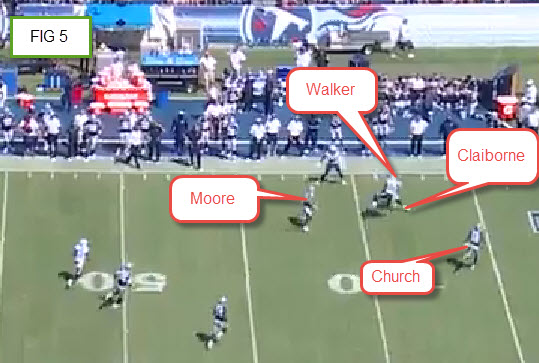 As it turns out, Claiborne made a great try at intercepting the ball and then was not in the best position to wrap up Walker, and so Walker was able to out run the rest of the defense and score a touchdown.

As our own rabblerousr pointed out in his scouting report article on J.J. Wilcox back in April of last year, he has very little experience at safety since he played his first three years on offense as a slot receiver and running back, doesn't have great speed, has short arms and ....

"gets caught out of position at times."

He does have a good upside and showed that at the Senior Bowl, but the big question is does he have enough experience to play well this year. One could say he is still learning and he is the best we have for the free safety position. On the other hand, one could argue that Sterling Moore is a better man cover safety.

What you can take away from this is the Cowboys are blowing coverages with the linebackers and safeties, and this is allowing big plays for the opposing tight ends.