Let's look at the Rams defense to see exactly what the Cowboys are preparing for in Sunday's game.

The Rams defense is led by coordinator Gregg Williams, who is well known around the NFL for his multiple coverages, and his exotic pressure looks. The defensive group is extremely young, and losing starters at CB (Trumaine Johnson) and Left Defensive End (Chris Long) has robbed them even more of experience on the defensive side of the field.

As I mentioned before, Williams is known for his personnel packages, and his varying pressure schemes. One of these defensive packages, is his "Ruby" package. Williams uses this variation of the "dime" (6 DBs) package to get lots of speed on the field. Ruby features three DL, two LBs, and six DBs. The speed on the field in this group gives Williams a lot of flexibility in his pressures and coverages. 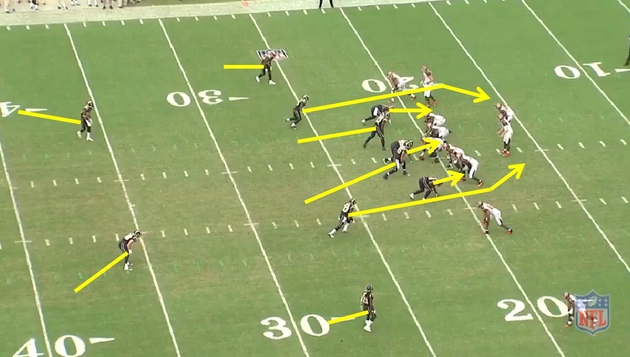 Here we see St. Louis in their Ruby personnel, with both LBs sugared up over the the OG's showing pressure to the Bucs QB. They are lined up with two deep safeties and the CBs in off coverage. You can see the Nickel and Dime backs coming down hill toward the LOS as they come on edge pressure from both sides. In this pressure look Williams is combining the two DBs with the three DL to create five man pressure. Behind this pressure look, the Rams are playing a two-deep, four-under zone look. This is something that is relatively rare to my knowledge. Most defenses will play a three-deep, three-under zone look behind pressures, but Williams is not afraid to only play two deep in his pressures, counting on his guys to get home.

Combo coverage to take away weapons 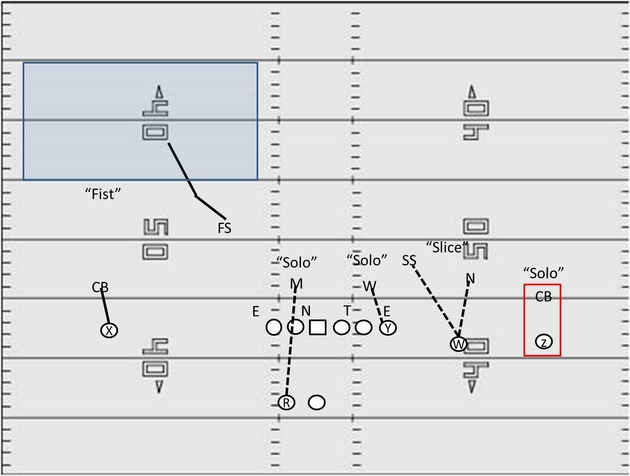 This is what Williams calls "Cover 7" which is a combination man look. This coverage involves a lot of communication in the secondary to prevent major busts. This communication involves multiple calls to designate how the defense will play each receiving option for the offense.

Fist - Two-Man technique. The CB plays man coverage on his WR, in a trail position with the safety playing the deep half zone over the top.

Solo - Man to man coverage with no help.

This will be the type of look the Cowboys encounter on third downs throughout the game in an effort to counter the options that Tony Romo has available.

This defense features a lot of talent especially up front. But has yet to produce the pressure and results expected from them to this point in the year. The Cowboys' best bet for success is to continue running the ball as well as they have, in order to avoid facing those young rushers in Williams' pressure looks.