Quick review of the morning headlines following yesterday's win over the Rams.

What a comeback! | Amarillo Globe-News
This wire report reviews the game and offers some player quotes, including this one:

"We never blinked, I can honestly say that," Bryant said.

Romo has 21 comeback victories in the fourth quarter or overtime, a franchise best.

"Tony went out there and did what Tony do," Bryant said. "He was poised and he knew what he wanted to do."

The Cowboys' comeback came against some pretty long odds, as this win probability graph shows 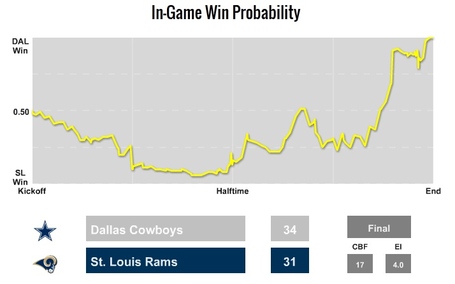 Texas-sized comeback rallies Cowboys past Rams - Colorado Springs Gazette
The Gazette, winner of a Pulitzer price this year, is impressed with the Cowboys' comeback.

The comeback matched the largest in Dallas history, the other two coming in overtime in 1984 against New Orleans and 1999 against Washington. It tied the second-largest lead blown by the Rams, who slowed Murray but got burned everywhere else.

Cowboys storm back to beat the Rams | ProFootballTalk
Michael Smith writes that as ugly as the first half was for the Cowboys, it got even uglier for the Rams in the second half.

Dallas receiver Dez Bryant had a big day, catching a 68-yard pass on which he got so wide open that the Rams’ defense didn’t even seem to realize he was on the field. Also having a big day was Cowboys running back DeMarco Murray, who lost a fumble early but gave the Cowboys some big plays late, including a 44-yard run that was his longest since 2012. Murray ended the game with 24 carries for 100 yards.

NFL Grades Week 3: Are the Cowboys actually good? - CBSSports.com
John Breech argues that Week 1 aside, the Cowboys might actually be good this season.

Yes, Tony Romo's back is made of glass and yes, you can probably only name two players on the Cowboys defense, but that hasn't really hurt the team so far. Lets not count those first two quarters against San Francisco. Five of the Cowboys' next eight games seem winnable. Dallas plays Jacksonville, Houston, Washington and the Giants twice. Stephen Jones probably shouldn't fire up the party bus for a trip to the playoffs just yet, but the Cowboys could be a dark horse team in the NFC.

All eyes were on Tony Romo after consecutive sluggish games were followed by a missed practice on Wednesday due to back tightness. The quarterback silenced the critics -- at least for one week -- bouncing back from a second-quarter pick six to play easily his best game of the season. Romo's biggest throw of the day was a too-easy 68-yard TD hookup with Dez Bryant. Romo finished with a passer rating of 116.8.

Tony Romo, the 34-year-old quarterback who looked stiff and immobile a week ago against Tennessee, moved spryly in the pocket as he consistently eluded defenders and created additional time to find his receivers.

No way do the Cowboys match the biggest comeback in franchise history without their veteran game-manager. When it was over, he had actually played like the "old" Romo instead of an old Romo.

Cowboys prove commitment to the run is real - Tim MacMahon, ESPN Dallas
MacMahon writes that the Cowboys have fully embraced the run this season.

The pass-happy Cowboys are a thing of the past. This is a smash-mouth team. That’s their story, and they really are sticking to it.

After no sacks against Rams, DC Rod Marinelli says Dallas Cowboys have to ‘rush better’ | Ra8iner Sabin, DMN
Marinelli's quote feels shorter than the headline of the article.

"We have to coach them better," Marinelli said. "They’ve got to rush better. No excuses. Just not getting it done."