A look at the Saints offense to see exactly what the Cowboys are preparing for in Sunday night's featured match up.

The Cowboys and their fans have a significant amount of history with Sean Payton and his offenses. Whether as a division rival with the Giants, a home team mastermind on Bill Parcells Cowboys staff, or in several meetings with his high powered Saints offenses, he has been a visible figure to us. Due to this exposure, we are also familiar with the things they try to do on offense down in the Big Easy. We all know about Jimmy Graham and Marques Colston, but there is much more to this Saints offense than those guys.

This is the mantra of many high-powered offenses at every level and the Saints have really epitomized that for years with the way they have used guys like Reggie Bush, Darren Sproles, and now their rookie WR Brandin Cooks. Let's look at a few ways they have put their first round pick to use. 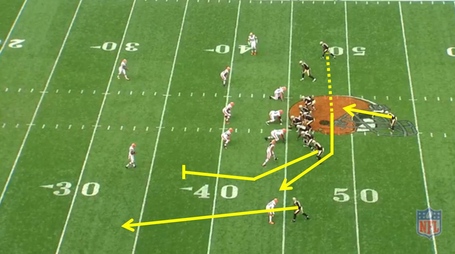 Here we see the Saints in 11 (1 RB, 1 TE, 3 WR) personnel, with Cooks lined up wide right. This is the Jet Sweep look that has been prominent throughout the college ranks, and has made its way to the NFL with guys like Cooks, Percy Harvin, Cordarelle Patterson, and the like. On this play, Cooks comes in motion towards the middle of the formation, building up speed as he comes. Drew Brees times the snap to be able to turn and hand the ball to Cooks on his way by, and continues to carry out a run fake to the RB. The offensive line shows a zone run to their right, and the back runs that way as well. The TE on the left side releases out and up the field to block the play side safety, and the play side WR runs a clear out go route, and tries to wall off the defender.

When Cooks gets the ball, its his job to out run the unblocked end man on the line of scrimmage and get to the edge. 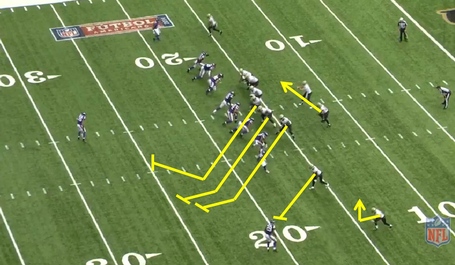 Above you'll see the Saints with Cooks lined up wide to the left in another 11 personnel look setting up a simple smoke screen from Brees to Cooks. Brees uses backfield action to create misdirection on the inside, while the LT, LG, and OC release upfield to set the blocks for Cooks.  The most important block on the field is the inside WR getting out to block the CB over Cooks. 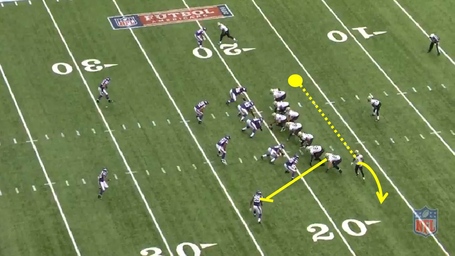 This is a simple bubble screen look out of 12 (1 RB, 2 TE, 2 WR) personnel, the yellow dot represents Cooks initial positioning, and he motions across the formation to a "flexed" type look just outside the 2nd TE on the left side. When the ball is snapped he runs a simple bubble or "arc" route and the ball is delivered quickly. If the TE is able to secure his block on the CB Cooks will have plenty of room to run. 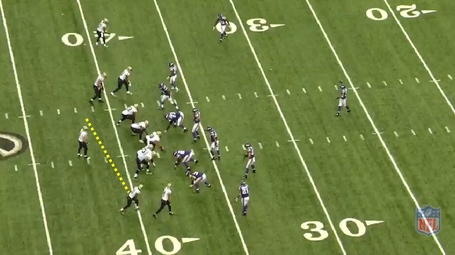 Here we see Cooks in 01 (0 RB, 1 TE, 4 WR) personnel aligned in a stack to the right. He will com in motion to the backfield to Brees' right. 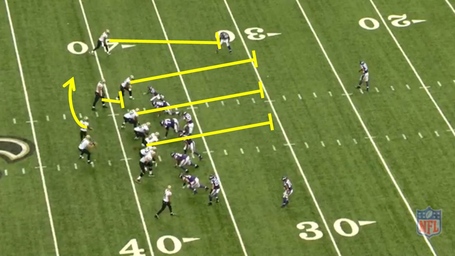 When the ball is snapped Cooks runs the same bubble route from the previous play we looked at, while Jimmy Graham blocks down from his stacked alignment. Both WRs, the LT, and the center all release down field to clear the lane for Cooks. 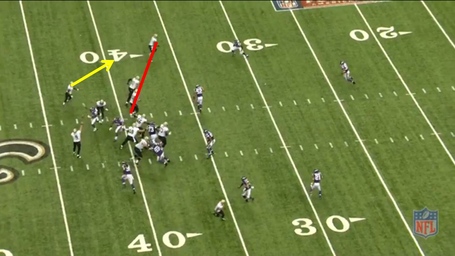 When the ball is released to the outside, you can see the lane escort developing for cooks as he begins to work towards the LOS to make the catch. 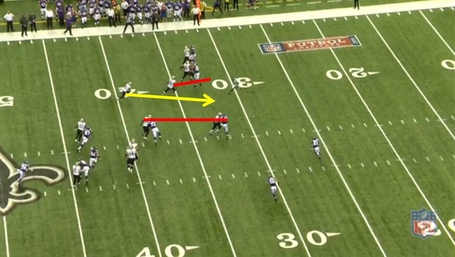 By the time Cooks is just about back to the LOS, we can see the highway that he gets to run down for an explosive play.

Running On The Edges 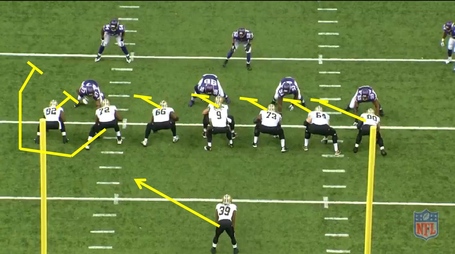 Here we see a basic Ace Formation, in 12 personnel from the Saints, and they are using the Pin N Pull variation of the Outside Zone run that is a base part of most NFL run games. With this variation, rather than having the play side tackle attempt to "reach" the DE on his outside shoulder, the TE blocks down or pins the DE, allowing the tackle to pull around him and get to the second level to block the OLB.  This variation can set a cleaner edge for the runner, allowing for quicker hitting outside runs. 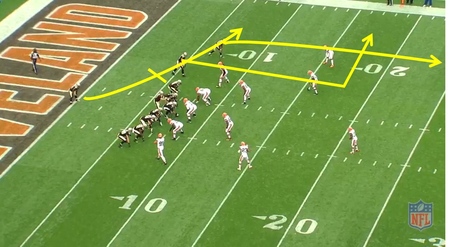 Here the Saints are in 13 (1 RB, 3 TE, 1 WR) personnel, with TE Jimmy Graham in the slot to the left. This is a basic three level vertical stretch that is used by every team in the NFL to attack single high man, and Cover 3 zone looks. The WR runs a Go route, while Graham runs a 10 yard out, and the RB runs a shoot route into the flat, after helping his OT by chipping the edge rusher to that side.

This combination will force the CB to run with the go route by the WR, while putting the Curl-Flat defender in a tough position having to maintain his depth to prevent the throw to the out, without losing leverage on the RB in the flat. Many times this combination results in a relatively easy completion to the player running the out. 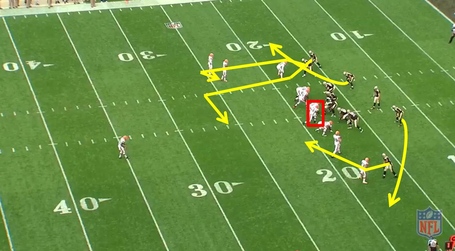 Here the Saints are using a simple Slant-Wheel combination to put beat the Browns man coverage. The player in the red square has responsibility for covering the first player out of the backfield to his side, while having to maintain an A gap responsibility in the run game. These conflicting assignments put him at an immediate disadvantage against a quick release like the one the back takes here. 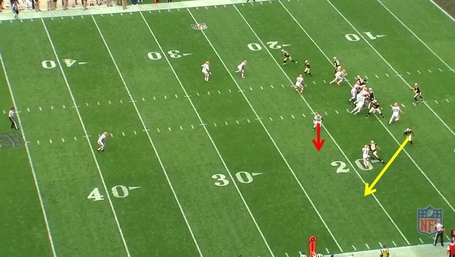 By the time Brees hits the top of his drop, he already knows where he's going with the ball, and has plenty of space to drop it in over the top. The slant route from the WR has the ability to impede the path of the LB as he attempts to close the space between he and the back, giving Brees even more comfort that he won't be able to undercut the throw.

We have taken a look at several things that make this New Orleans offense a tough group to defend, and we haven't even touched on Jimmy Graham's impact on the game, or the deep crossing routes and double moves we discussed leading up to the Cowboys loss to the Saints in 2013. Which just goes to show how explosive this team can be, with so many options available and such high quality QB play they are very dangerous.