A review of Jimmy Graham's game against the Vikings and what that means for the Cowboys.

How do you handle a problem like Jimmy Graham? That's what I imagine the defensive coaches have been asking each other every day this week (I also like to picture them bursting out in song when they discuss it, but I digress). That's also a question Cowboys fans have been asking themselves all week long. The short answer is, you can't stop Jimmy Graham, but you can contain him. That's what the Vikings did last week. Against the Vikings, Graham posted season lows in yardage, targets, receptions average per reception, and yards after catch. It was also his lowest PFF grade of the season at -0.2, and his lowest receiving grade of the season at 0.1. So how did the Vikings handle a problem like Jimmy Graham?

Jam at the Line: This is something the Vikings did to great effect, both out wide with CB's and safeties, and inline with linebackers and defensive ends.

Here we see the Vikings jamming Graham with a defensive end to good effect. 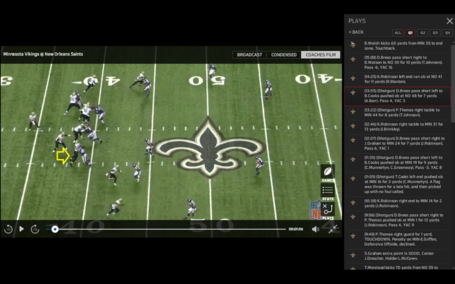 Of course if you're going to jam Jimmy, you have to make sure that you have a player physical enough to do so. I imagine Sean Peyton is going to do his best to isolate Graham on Morris Claiborne, and that Jason Garrett will do everything in his power to prevent that from happening. Because if you don't get a good jam on Graham, this happens: 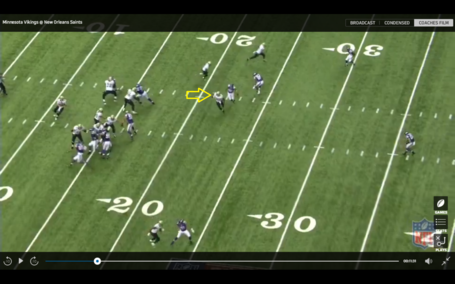 and just for good measure (yes that is the same defender in every picture....poor guy): 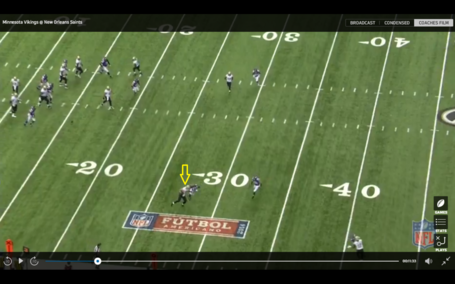 One thing that the Vikings did very well when they jammed Graham, especially on vertical routes, was forcing him inside. That seems counterproductive, but at least in this game Graham really wanted to get to the outside shoulder of defenders on vertical routes. 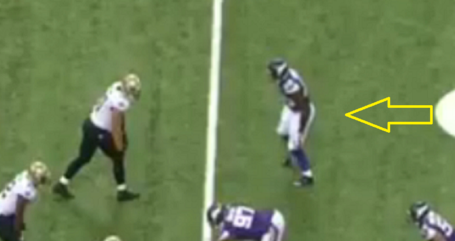 Below we see the defender diverting Graham to the inside. 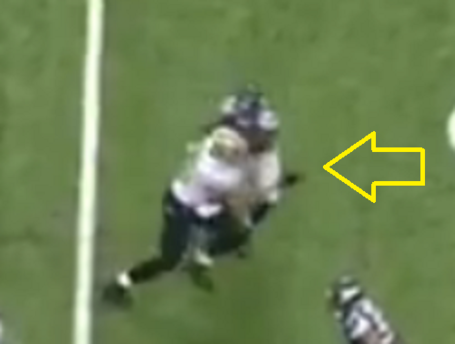 Graham has managed to separate from his defender, and looks like he could make a move to get open. 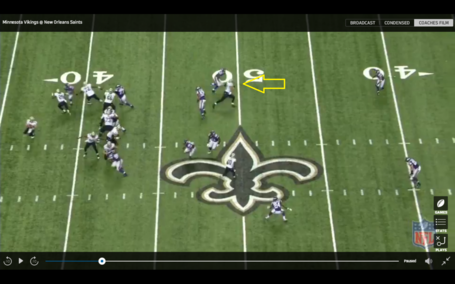 There's a lot going on here. Brees is looking towards Graham for his initial read (red arrow) but Graham is so intent on getting back to the outside he doesn't even notice Brees is looking for him (yellow arrow). Meanwhile there is a receiver in the middle of the field wide open. 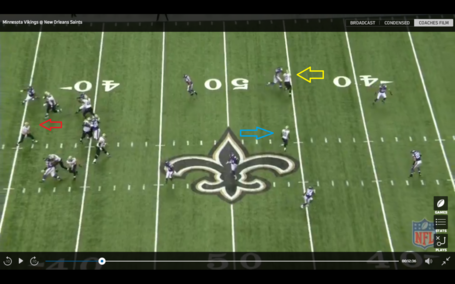 It was a good play by Graham's defender redirecting the route and forcing the incompletion. But there's something interesting going on after the last picture that highlights a real tendency of the Saints. The receiver with the blue arrow doesn't stop his route in the middle of the field, he keeps heading left towards the sideline that has been cleared out by Graham's vertical, and that's ultimately where Bree's throws the ball. This is something the Saint's love to do; run Graham on a deep route then take advantage of the attention he gets by running a receiver or running back into the spot underneath.

Here we see a similar concept but reversed; Graham runs a shallow route (yellow arrow), with a receiver running a deep route over the top (blue arrow):

Below you can see Graham beginning his cut on the shallow out (yellow arrow), while the second receiver is attacking the safety (blue arrow). However the safety has already committed to double teaming Graham, despite the fact that Graham is being covered by the cornerback (red arrow). 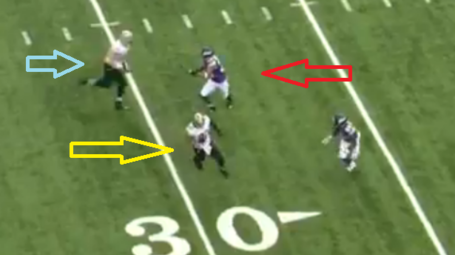 The safety double-teaming Graham is unable to recover (red arrow). No other defensive player is even looking in this direction as Brees is completely selling the pass to the other side of the field. The only player who might have a chance on this play is the deep safety (blue arrow), and he's already moving in the wrong direction responding to Brees' fake. 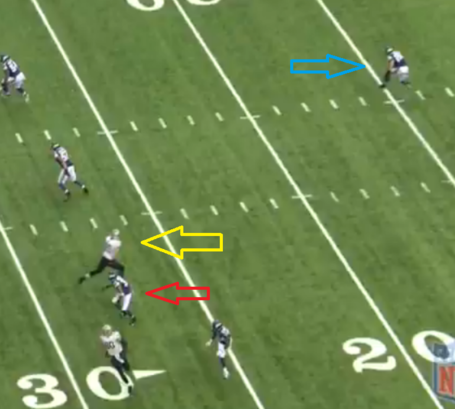 Know Your Run/Pass Keys: Jimmy Graham may be the best pass catching tight end in the league, but at least in this game he struggled in his blocking assignments. Here is the very first run in the game that came to his side.

You can see Graham has engaged his man, and has marched him backwards. However, notice where Graham is looking; he is not mentally engaged in the block and is already looking downfield. 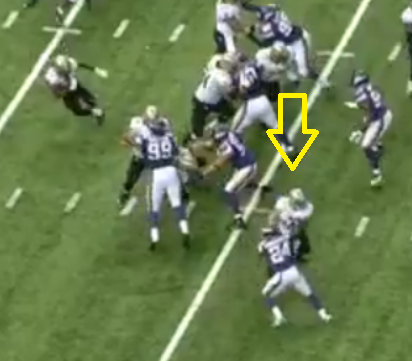 It's hard to tell from the next picture whether Graham is beaten by the defender or has disengaged (it was the latter). Regardless, Graham has allowed the blocker to get behind him with a clear path to the ball carrier: 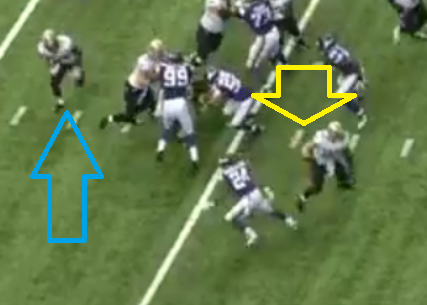 Here we can see Graham moving upfield ready to block a defensive back. Meanwhile, his original blocking assignment is in the backfield, tackling the running back.

After that play the Saints did not run to Graham's side until near the end of the game, and rarely left him in to pass block (generally on screens to the opposite end of the field). It's very important that Dallas defenders recognize tendencies like this early, or something bad can happen.

Like this! Below we see Graham with a defender (I believe it's Brian Robison), lined up straight against him. Graham looks like he might be attempting to pass block; he doesn't have his hands up, but he also hasn't entered his route. 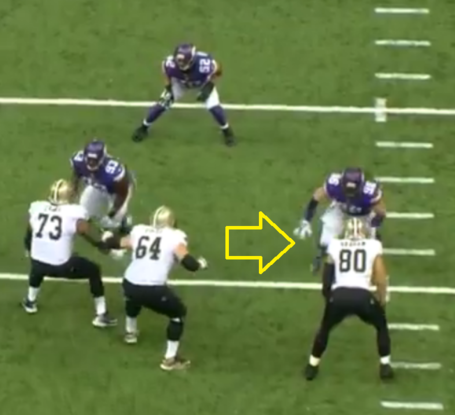 Robison at least seems to think Graham is his primary blocker, and comes rushing in, visions of sack glory in his head. Here you can see him getting ready to swat Graham away like a gnat. His hand is coming up to push Graham to the outside of the line. Notice Graham's leg's however! 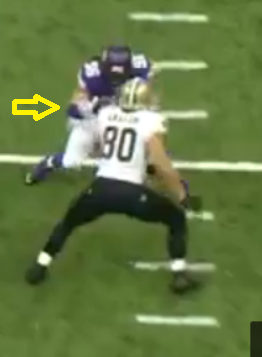 Graham is only too happy to go where Robison is directing him, and Robison now has a lineman coming over to take him on (yellow arrow). Meanwhile, the Vikings linebacker is also fooled by the blocking, and has not taken any kind of drop or moved to the outside at all (blue arrow). 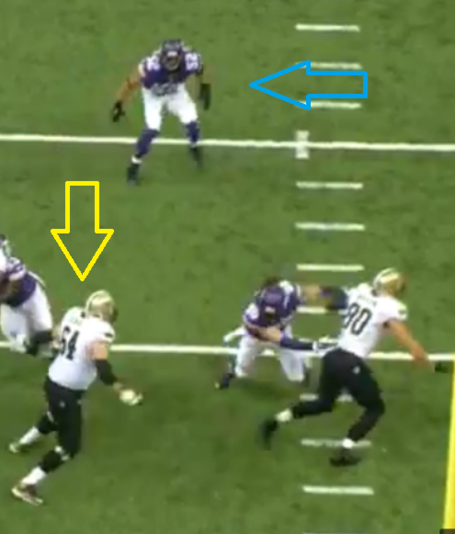 Too late, the linebacker realizes Graham is going out for a reception and starts to move. It's an easy pitch and catch, and Graham picks up the first. 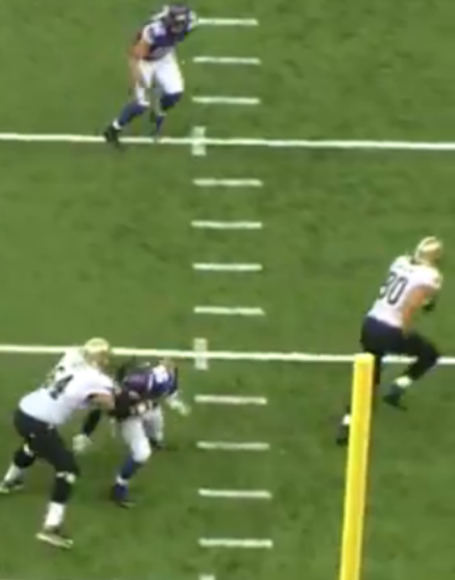 That's not the only time Graham and the Saints use play action or a fake block to create separation. The Dallas linebackers have to read their run/pass keys correctly or they'll end up looking like this. Note: trying to change momentum from charging forward to moving backwards while Jimmy Graham is speeding by you is a recipe for disaster. 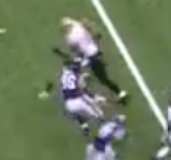 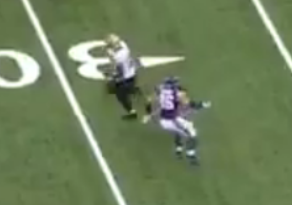 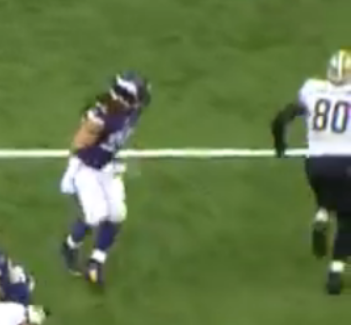 It goes against normal defensive procedure, but it may be a good idea for the linebacker on Graham's side (probably Bruce Carter), to play the pass first and then play the run.

Don't be Scared: One of the key factors in the Saints victory of the Vikings was big plays caused by double teaming Jimmy Graham and leaving other receivers open. And there was no need for that. Jimmy Graham is not unbeatable, and Drew Brees is not infallible. Here we can see a play where Graham is beaten with single coverage and Brees makes a throw he'd rather have back. In the initial formation we can see a safety man up on Graham: 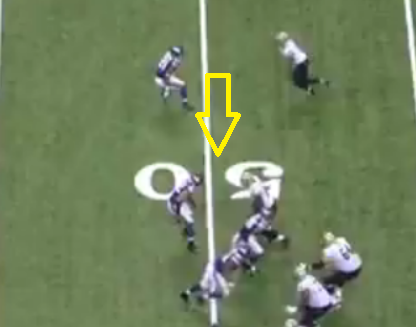 Next we see the Vikings safety with a good jam, forcing Graham off his initial route. 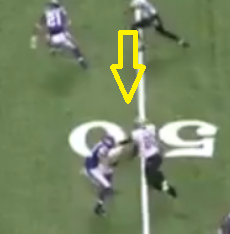 The Vikings have good coverage on that side of the field (yellow arrows), but Brees is locked in (blue arrow) 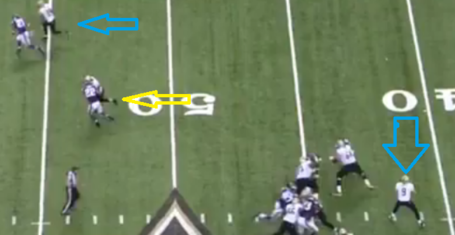 There's nowhere to throw the ball, but Brees is going to try and attempt to force it anyway. Graham has just started to make his cut, and Brees has already gotten the ball out.

Pressure may have forced Brees to throw this ball earlier than he wanted, but this pass has no chance even without a pass rush. The safety played the out-route perfectly and is in great position to undercut the pass for the interception. 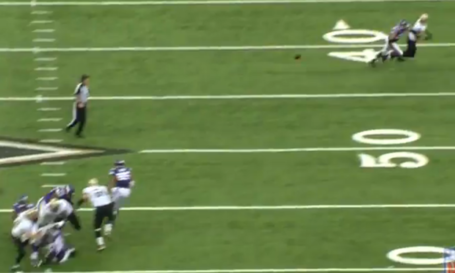 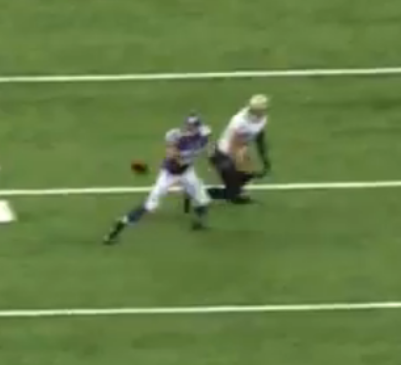 Unfortunately for the Vikings, the safety is a safety for a reason, and he's unable to bring in the surefire interception. Still he played Graham beautifully 1-on-1, and Brees makes a horrible read and throw.

Putting It All Together: The Saints are 1-2 for a reason. They have some scary weapons on offense, but they are not the unstoppable force of years past. If Dallas can consistently jam Jimmy Graham on the line and not let him get into his routes it seems to really disrupt his game. Dallas needs to understand that right now the Saints' bread and butter plays are not passes to Jimmy Graham, but using him as a decoy, and getting the ball into the hands of their quick playmakers in the space vacated because defenses are preoccupied with Graham. If we play fundamental football with our coverage, and our linebackers recognize their run/pass keys, then there is no reason we can't contain Jimmy Graham and have a good chance to win on Sunday.