Want to know which Cowboys players were on the field for how many snaps? Look no further.

A little over two weeks ago, in an article titled "Can The Dallas Cowboys Score 30 Points A Game?", I wrote about how the Cowboys had the personnel on offense to become one of the very few teams able to average 30 points per game over an entire season. With 115 points scored in four games, the Cowboys have the number four scoring offense in the league (and haven't yet played the Jaguars) and are closing in on that 30-point average.

I had always assumed that achieving such an average would require the Cowboys to take an inordinate amount of snaps on offense - and therefore by extension protect the defense, which would have a fairly low snap count. But at least through the first four games, that's not exactly the case.

Yesterday against the Saints, we only saw a minor discrepancy between the offense (66 snaps) and defense (61 snaps). Not much of a difference, but reason enough to review all the snap counts from Sunday’s game to get a better feel for what was happening all over the roster.

Check out the snap distributions below, and let us know what your reactions are in the comments section. We'll get started with the offense:

This is basically lineup as we saw last week. The Cowboys' base offense are the five linemen, and five skill position players Romo, Murray, Witten, Bryant and Williams. The skill guys occasionally get a breather here and there, and the 11th spot in this base offense rotates between the backup TEs, RBs and WRs.

On to the defense:

Back in March this year we took an early look at a new phrase that was being used to describe Rod Marinelli's plan for the defensive line, the "Swarming Rotation," a phrase introduced to Cowboys Nation by Cowboys Assistant Director of Player Personnel Will McClay.

When I first saw the phrase "Swarming Rotation" used on Twitter yesterday to describe the potential 2014 Dallas Cowboys defensive line, I thought it was just a bad euphemism for a "D-line full of nobodies."

Notice how the Seahawks had a 7-man defensive line rotation with a fairly even snap distribution, while the Cowboys relied heavily on four starters, and played what backups they had sparingly, for a variety of reasons. This is what that chart looks like after four games this year: 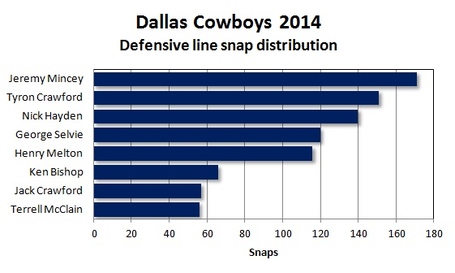 I'll leave it to you to decide whether you see an improvement here or not, but I'd ask you to consider that the table shows at least a 5-deep line. Consider also that Henry Melton was limited yesterday with a hamstring strain; that Terrell McClain left last week's game early and didn't play yesterday; that Davon Coleman (52 snaps has now missed two games); that Anthony Spencer just played his first 22 snaps; that DeMarcus Lawrence will likely be available for the second half of the season.

With all of that in mind, it's not hard to envision a even distributon of snaps across eight players. But all of that also drives home the point that you will not have that even distribution if your players are not healthy.

And finally, to round things off, special teams: