Let's look at the 49ers offense to see exactly what the Cowboys are preparing for in Sunday's season opening match up.

When you think about the San Francisco offense under fourth-year offensive coordinator Greg Roman, the first thing you have to think about is the way they run the ball. Similarly to our own Dallas Cowboys, the 49ers have invested multiple first-round picks along their offensive line, and have placed a continual emphasis on the run game.

A QB like Colin Kaepernick, who has the ability to use his legs to make plays, gives Roman the ability to use the same advantages gained by the old single wing offenses, as well as the wild-cat packages seen in the NFL in the last decade to create opportunities to make plays. To get an example we're going to look at a play from the 2013 NFC Championship game.

This play is the old school "Power" run scheme, that just about every NFL team has in their playbook, with the QB as the ball carrier. In this scheme the blocking back will kick out on the last defender on the line of scrimmage, while the other play side blockers block down on inside defenders, and the back side guard pulls around to lead the runner through the hole. Below you'll see it run out of 11 (1 RB, 1 TE, 3 WR) personnel set against a Seattle nickel front.

As is typical for both the Seattle and Dallas defenses, Seattle has rolled a safety down into the box to help in the run front. But the idea of using the QB to run the ball, rather than having him make a hand-off and no longer be involved in the play, allows San Francisco to maintain the numbers advantage at the point of attack, as you see below. 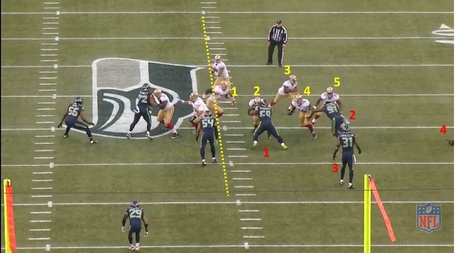 At the point in the play where Kaepernick is prepared to come down hill with the ball, San Francisco has five players in position to make play side (to our right of the dotted yellow line) blocks, against only four Seattle defenders lined up on the play side. Also notice the uncovered center has turned his attention back side, where he has no real immediate threat, and no DL player to block down on. 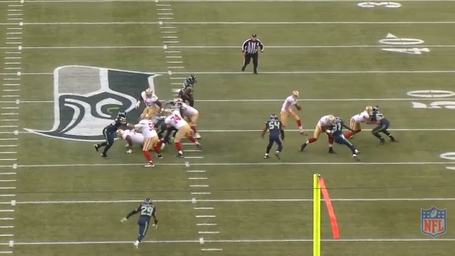 As the play develops a further, we see the RB has secured his block, as has the pulling guard, however, because the center immediately looked backside rather than getting up field to block the Mike LB (54), Kaepernick has no where to go. If we were to eliminate 54 from the play, with a good block by the center at the second level, it is easy to see how this could have turned into an explosive gain for the 49ers offense.

One feature of some of the old Wing T, SIngle Wing and other run heavy offenses was that they ran just a few plays, but every play worked off of the others. Running one play several times would cause the defense to over compensate which would allow you to counter it with a misdirection play based on that first concept and allow you to take advantage of the defenses over reaction. Here we see an example of these play calling "series" once again from the NFC championship. 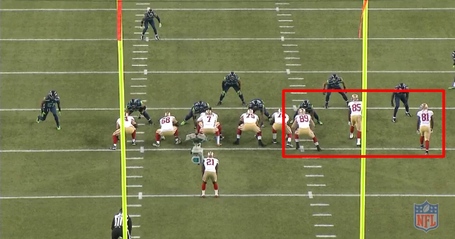 Above we see the 49ers in 12 (1 RB, 2 TE, 2 WR) personnel, in a trips-right bunch formation. However, I want to point out the three members of the bunch, TE's Vernon Davis (85), and Vance McDonald (89), along with WR Anquan Boldin (81). These three players present a formidable edge blocking trio for Roman's run schemes, as well as creating options in the pass game. 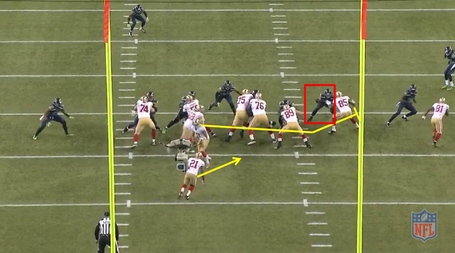 The scheme from the 49ers is a one back version of the same Power scheme we saw above. With the back side guard pulling around to lead Frank Gore on the run. One thing I want to point out here, is the DE who Davis is responsible for sealing has put himself in a good leverage position to slide inside of Davis and make a play in the back field.

This shot really exhibits the awareness of the guard as he pulls, he sees Davis' block breaking down and rather than running past him to lead Gore through the hole, he fills the gap on the DE allowing Gore the ability to bounce the ball to the outside for a positive play.

As we get ready to look at the next play, notice the backside "contain" defender for the Seahawks, he has fully turned his body and is committing himself to backside support of the run play. 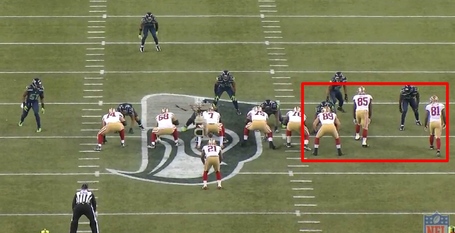 Again, we see the same bunch formation, countered by a very similar look from the Seahawks just a few plays later in the game. 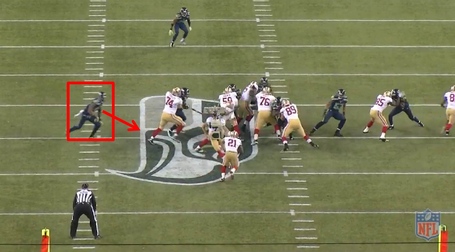 On this play we again get "Power" action from the 49er front, including the pulling guard. Again notice the backside contain defender. 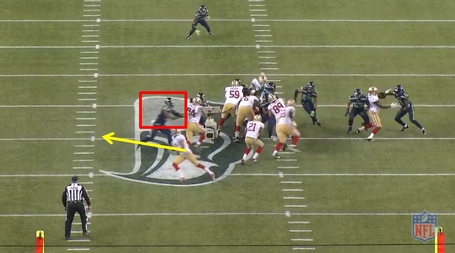 This time, rather than handing the ball to Gore, Roman calls again on the legs of his QB, booting him out on a run designed to take advantage of the overreaction from the defense on the power play we just saw. This play allowed Roman to get his QB in wide open space and secure a big play by his QB.

As we look below we will see the 49er offense again line up in the same bunch formation within the same small sequence of plays. 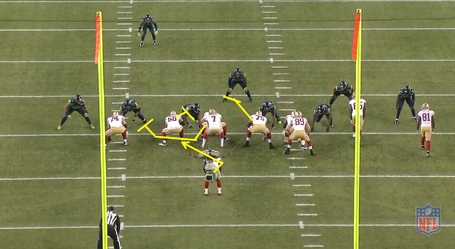 This time, after hitting the Seahawks front-side with the "Power" scheme, and back side with the boot, Roman dials up a counter play designed to go in the B gap just to the outside of the left guard. This play features a "fold" combination by the OC, and the LG, where the LG blocks down on the 1-technique, and the OC folds around to kick out on the DE playing the "4i" technique (inside shoulder of the OT). 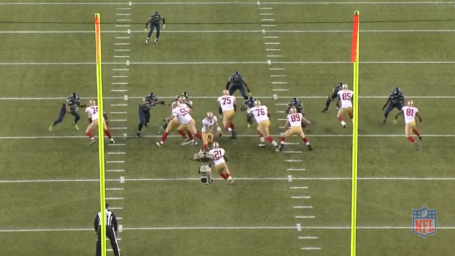 Here we see as the give is about to take plays, we see the fold taking place, however, the DE has slanted inside and is right in the hip pocket of the OG, making a kick out block next to impossible. 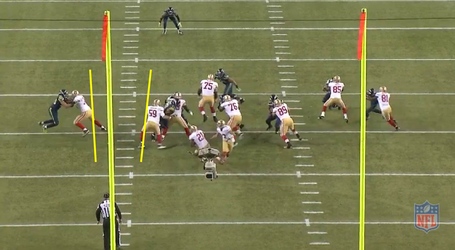 Rather than attempting the kick out, the OC simply flips his hips around and seals that DE inside, creating a very nice running lane for the RB, with blockers on the second level ready to spring him free.

Running In The Red Zone

Now we're going to look at a play from the 49ers week 3 loss to the Indianapolis Colts last year. This is a single back draw, designed to spring RB Kendall Hunter for a big play. The 49ers are again in 12 personnel, with both TE's tight to the formation on the offense's right. 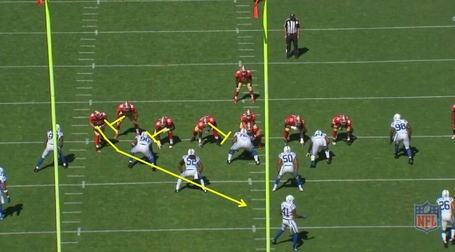 Above you'll see the blocking scheme as well as the route shown by the second TE to help sell the pass action on the draw play. 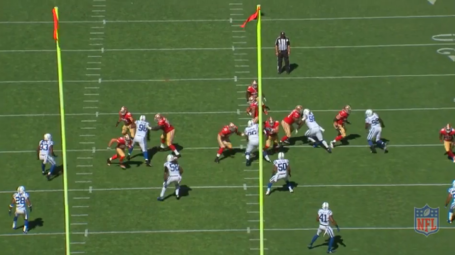 As the play develops, we can already see the hole forming for Hunter, and with the defenses left ILB focused on his coverage responsibility, the 2nd TE, the play looks to be in good shape. 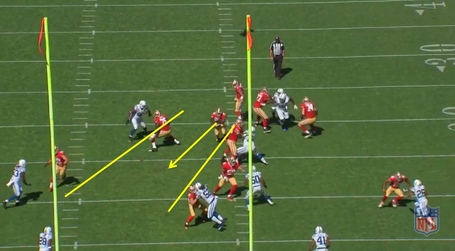 Just after the handoff is made, there is a clear lane for Hunter, with both LBs sealed to the inside. The only real threat to keeping the play from scoring is the safety stepping up to fill. However, the CB to that side over pursued the play, and crossed the face of his blocker, which allowed the RB to bounce the ball outside of that block and outrun the defense to the pylon.

Creating Big Plays In The Passing Game With Play Action

Now that we've seen a sample of the wide variety of schemes the 49ers will use to run the ball, lets look at a way that Roman will use the play fake to generate big plays for their best offensive weapon, TE Vernon Davis.

Here we see the 49ers lining up in 22 (2 RBs, 2 TEs, 1 WR) personnel in their week 15 victory over the Tampa Bay Bucaneers. The ball is at the 49ers own 48-yard line. This area (between the 40s) is a typical spot for NFL offenses to take shots down the field. 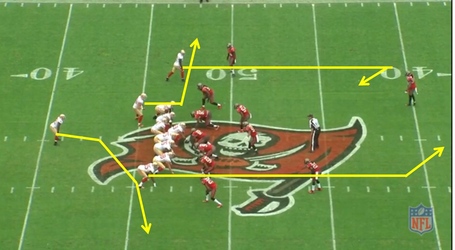 On first down and ten immediately following the first-half two-minute warning, Roman dials up the post-curl combination, known as the Pin combination in some terminologies. 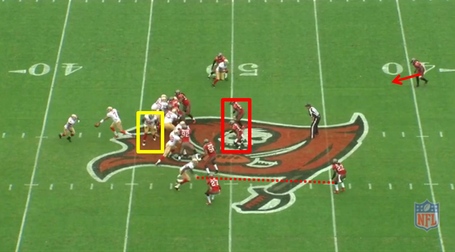 As Kaepernick executes the play fake, notice the pulling guard giving the power action we've seen so many times. In the Tampa secondary you can see that the open (weak) side safety is working down hill slowly in anticipation of a run play, while the CBs both look to be executing zone technique (butts to the sideline). On the closed (strong) side the safety has his eyes on his run/pass key, which happens to be Vernon Davis, while both LBs are still flat-footed reading the play.

As the QB reaches the top of his drop after the fake, and the receivers reach the 12-15 yard area in which all NFL routes (outside of the quick game) break, you see what looks like cover 2 as the Tampa LB (red square) begins to retreat towards the deep middle. By now, the openside safety has read pass, but is driving down hill on the curl route, leaving his team mate one on one with Davis, in a very bad leverage position.

Kaepernick is flushed slighlty from the pocket, and you can see the triage of Bucaneer defenders converging on the curl route by Boldin, leaving a very large open area for the QB to deliver the ball and allow Davis to run under it. 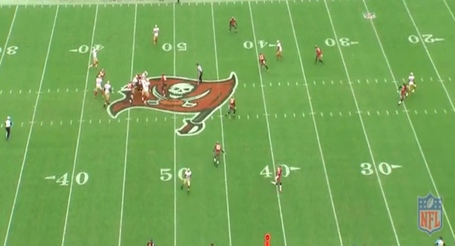 At the point of the throw Davis is already past the safety, and the result is a 52-yard touchdown strike just before the half.

Beyond the X's and O's

One of the biggest concerns for the Cowboys in this game has to be Colin Kaepernick's ability to extend plays, and make plays with his feet, even when the Cowboys do a good job of initially stifling the play. 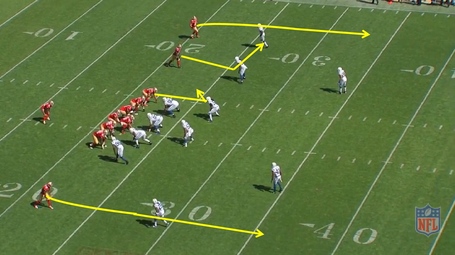 Here we see the Three Man "Stick" combination from San Francisco out of 21 (2 RB, 1, TE, 2 WR) personnel, with the fullback motioned wide to the offenses left. 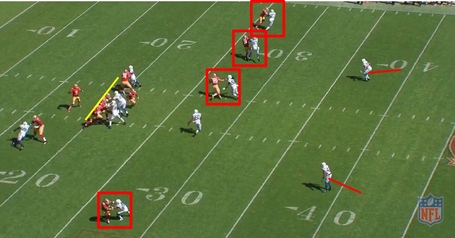 As Kaepernick reaches the top of his 3-step drop we see him raising the ball to make the throw, however, against the Colts Man Under (2 deep safeties, man underneath) coverage, none of his receiving options to the front side has won against the tight man coverage. 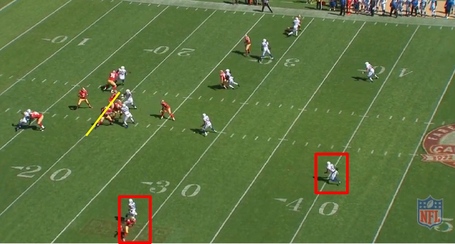 As Kaepernick resets in the clean pocket, his backside WR has cleared his man (maybe a bust by the CB), and with the safety to that side cheating off his land mark (top of the numbers), there is a potential window for a throw. 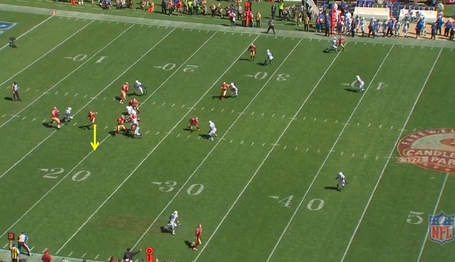 However, Kaepernick sees a lane through which he can escape the pocket and run, and with one LB removed from the core of the formation due to the FB's motion pre-snap, and the other in man coverage on the RB who has released, there is no one to immediately threaten Kaepernick as a runner. The safety has noticed the free runner down the sideline, and is in retreat mode to get back into position on the go route, and Kaepernick has plenty of space. 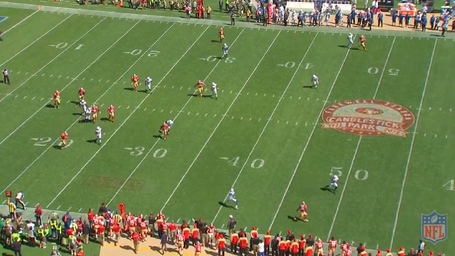 The QB is able to break out of the pocket and run to the sideline for a first down, moving the sticks and keeping the drive alive for the 49er offense.

With so many questions remaining on the Cowboys defense going into week one, and so many ways that this 49er offense can hurt you, this is likely to be a game where Dallas gives up a lot of yards, particularly on the ground, while hoping to secure a rare 49er turnover, or force field goals rather than touchdowns. Hopefully give Tony Romo and the Cowboys offense a chance to make some plays and be in position to win the game.

Note: Be on the look out tomorrow for our look at the San Francisco defense.