Cowboys vs. 49ers: The Play That Underscores Why The Cowboys Continue To Lose

This is why the Cowboys remain a mediocre team that everyone thinks is getting worse.

Share All sharing options for: Cowboys vs. 49ers: The Play That Underscores Why The Cowboys Continue To Lose

A reasonable person could choose many plays that were turning points in the Cowboys 28-17 loss to the San Francisco 49ers. The fumble by DeMarco Murray that put the team in a seven point hole. Tony Romo's interceptions, particularly the first one, where a wide-open Terrance Williams was waiting to go the length of the field. Maybe the just-miss sack of Colin Kapernick that ended up a juggling TD for Vernon Davis. The point is, there were plenty of plays that contributed to the Cowboys loss.

Instead, I would like to focus on one play that I believe exemplifies why the Cowboys are so maddening, so gut-wrenching, so close at times to breaking out as a good football team only to shoot themselves in the foot again. This is the Cowboys taking something relatively easy, making it hard, and once again going on to lose a football game.

The scenario: The Cowboys are down 7-0 after giving up a quick touchdown to the 49ers defense. Giving Cowboys fans hope is the fact that the offense has driven the ball right down the field against the 49ers vaunted defense. Dallas gets down to the San Fran two-yard line, it's 2nd and 1. You now have two chances (three if you choose to go on 4th down) to pick up one yard. One yard gets you four more downs to get one more yard. Then you've tied it 7-7 and it's game on. To make matters even more obvious, on the drive Dallas had gained 33 yards on 5 running plays (including a penalty play). That's over six yards a pop.

Yes, you'd guess the Cowboys would run the ball. Two shots at a yard, give it to Murray and let's go. That's what the Cowboys were also thinking on the play. Look at the lineup they had out on the field initially on the play, before they called timeout with the play-clock running down.

That, my friends, is the jumbo set. Extra left tackle? Check (red arrow: Jeremy Parnell). Two tight ends? Check (yellow arrow: Witten, Hanna). Fullback? Check (green arrow: Tyler Clutts). The Cowboys are going to run the ball, (unless they were going to be tricky and pass out of that formation which is definitely possible!) It looks like they're going to pound it down the 49ers throats. But the play clock runs down and the Cowboys are forced to call a timeout.

As Romo, Scott Linehan and Jason Garrett confer on the sidelines, the personnel changes and we get this. 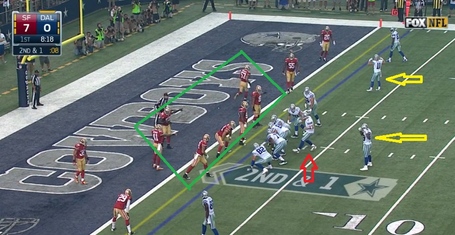 Now we're in 11 personnel, three-wide. You can still run from this formation and initially Romo goes up under center, but he immediately changes the play, backing out to the shotgun (red arrow). Maybe it was a fake audible and they were planning to pass all along, but that seems doubtful as both Cole Beasley and DeMarco Murray signal the same audible motion out to the wide guys (yellow arrows). You could still run the draw from this formation, but instead this play is clearly for Dez Bryant (even though he's double covered). Why Romo checks out of a 7-man box that is not tightly packed is beyond me (green box). The two linebackers in the middle are a couple of yards back in the endzone, and one of them is still milling around as the play starts. Romo has already said he didn't like the look of the defense against the run on this play, but I'm sorry, I just don't see why he wouldn't run it. Even so, you tell me you don't have any confidence that Murray can win a battle for one yard? Come on, that's a high percentage play. So now you have gone from a jumbo set initially, down to a possible run set that eventually turns into a pass set. How did we get so far from the obvious, high percentage play?

Now the play actually starts, and it's bad choices/execution all around. 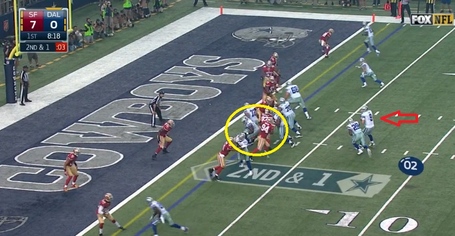 Romo is locked in on Dez from the start (red arrow). Why? He's is the only player double covered. The 49ers are playing the slant on the inside, and the fade/fade-stop on the outside. Across the field Terrance Williams has a one-on-one, but if you watch the play all the receivers are slow getting off the ball (look at all the action in the middle, then look at the three receivers?) and the Williams/Beasely combo barely run routes on the entire play. The Cowboys have bet the house on a double covered Dez. Romo doesn't throw the ball, which is smart, but Tyron Smith has inexplicably blown his block on Justin Smith (yellow circle). He pops forward at the snap, perhaps selling the play-action part of the play, but absolutely whiffs on Smith. Even if he thought he was run blocking he still missed the man totally.

Romo gets sacked, and look at the Cowboys crazy blocking scheme on this play. 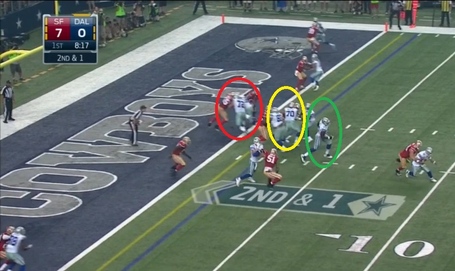 Two Cowboys linemen are three yards downfield blocking (red circle), two of them are at the line of scrimmage (yellow circle), and poor Tyron Smith is running back in desperation to save Romo (green circle). I'm not sure everybody along the line was on the same page. Regardless, the play is a disaster, Romo gets sacked, the Cowboys kick a FG and the beatdown is on.

Maybe it's reading too much into one play, a reasonable charge. But this sequence just seems to symbolize the Cowboys recent seasons. They take what should be a simple and easy decision, they have the right instinct initially, then decide what the hell...let's make this as hard as possible.