Could The Cowboys Roll Out Another Surprise Defensive Package For the Giants?

In the last game before the bye week, Rod Marinelli came up with a formation no one had ever seen him run before. Could he have something similar coming for the next game?

Share All sharing options for: Could The Cowboys Roll Out Another Surprise Defensive Package For the Giants?

At times, there have been some questions raised about whether Rod Marinelli is getting a little too old for the NFL. A lot of people see his scheme, derived from the Tampa 2 made famous by Monte Kiffin, Marinelli's long time friend and predecessor as defensive coordinator of the Dallas Cowboys, as old hat. You hear whispers that the scheme is not able to keep up with the modern passing attacks featuring big wide receivers and even bigger tight ends who are now almost exclusively catching the ball. But Marinelli caught everyone off guard with an innovative 3-2-6 alignment against the New England Patriots. It was designed to get extra coverage on players like Rob Gronkowski and Julian Edelman. It was a formation that could only work once the Cowboys got Greg Hardy and Rolando McClain off suspension. It showed pretty conclusively that Marinelli is one Devil Dog that can come up with a few new tricks.

Well, it is a rainy afternoon in East Texas as I write this, and after having cussed and discussed just about every aspect of the roster changes and coming game against the New York Giants, you will hopefully indulge a flight of fancy. Suppose that the Giants get into their first third and long of the game, and Eli Manning comes up to the line and sees something like this facing him (apologies for the simplicity of the diagram): 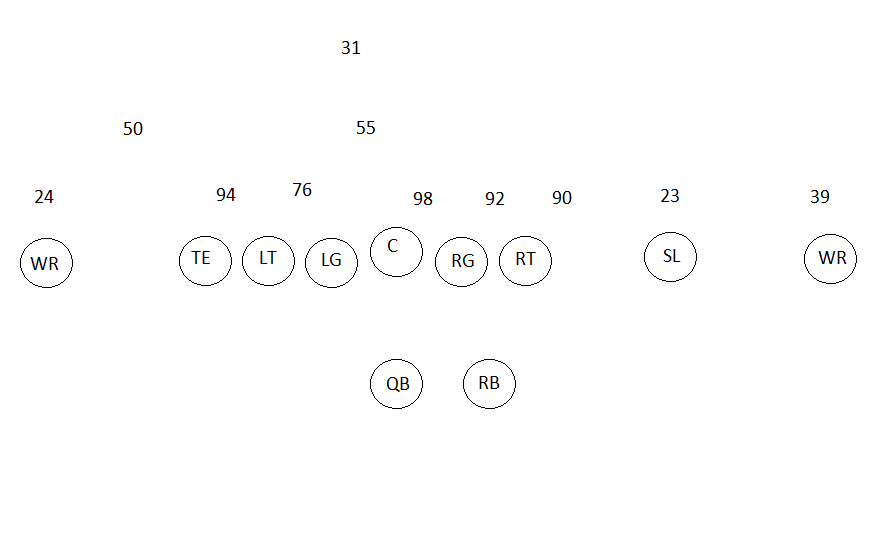 What does he do now? My guess would be something along these lines.

"Uh, coach, what the heck is that? I am going to need some more protection."

Coughlin looks at him with his patented constipation face. "More protection?? What will you do with that??"

Manning shrugs. "Drop back and fire a quick pass about ten feet over Odell's head so they can't call grounding."

"NO! Get back out there and run the play. And no give-up handoff to Jennings, either!"

"OK, but I need a couple more minutes."

Coughlin manages to look even more perplexed. "For what, exactly?"

"I need to update my will."

OK, other than the likelihood that the timeout would be a logical response to this, I doubt any of the rest would actually happen that way. But I am completely serious about the formation. Just look at it.

You now have the FIVE best pass rushers on the team to come full-throttle after Manning. And at least three of them are going to be one on one. The odds are that the tight end will have to stay in to try and keep Randy Gregory from streaking around Erick Flowers the way he was in the first game of the season. The running back is also going to probably stay home to try and keep Manning from getting blasted. Tyrone Crawford gets to take the center on, Jeremy Mincey has the right guard, and DeMarcus Lawrence is matched up with the right tackle. But the best thing is that Greg Hardy gets to take on Justin Pugh all by himself.

This is a personnel package that could be born from the personnel situations on both sides. For the Cowboys, you have Sean Lee to cover the tight end if he does come out to try and give Manning a quick target. Rolando McClain is there to shadow the running back should he either try to come out as an outlet receiver or should the Giants go with a running play to try and cross Dallas up or just to save Manning from destruction. Morris Claiborne would be matched up with Odell Beckham (if he plays, he is listed as questionable for the game), and Brandon Carr and Corey White will have Dwayne Harris and Rueben Randle, with White taking whoever lines up as the slot receiver. Byron Jones will be playing as a single high safety, and would likely come down to double up on Beckham. This is all made possible by the fact that Gregory is back from injury, and Lee and McClain are so good at covering and playing the run. If the tight end and running back stay in to block, as would be likely, both linebackers are very, very good at dropping into coverage and going after the ball if Manning tries to throw in their direction.

Last game, Tom Brady was able to withstand five sacks and still get the ball to his receivers enough to wear the defense down. But the Cowboys were notably inept on offense, and the hope is that Matt Cassel, La'el Collins, and perhaps Christine Michael will be able to provide the much-needed spark to change that. Meanwhile, Manning was clearly affected on Monday by the pressure the Philadelphia Eagles put on him with their front seven. This formation would certainly hold a promise of doing the same, and just maybe those elusive takeaways may come to Dallas.

Yes, it is just a bit of speculation. But after seeing what Marinelli rolled out last game, it  is perhaps not as far-fetched as it would have seemed otherwise. It seems to match up very well with the personnel of both teams.

And it just seems like it would be so much fun to watch. What do you think?