Latest Cowboys headlines: Get ready for Weeden-mania in Dallas; Christine Michael could make his Cowboys’ debut Sunday; defense has to win the line of scrimmage on Sunday.

McClain, Hardy preparing for return to Cowboys next week | Drew Davison, The Star-Telegram
Greg Hardy and Rolando McClain are eligile to return on Monday, when their four-game suspensions end.

The Cowboys face the New Orleans Saints on Sunday, and then will have a stiff test against the New England Patriots in Week 5. Getting McClain and Hardy back in the mix will certainly help fortify a defense that started strong before struggling last week against Atlanta.

Returns of Greg Hardy, Rolando McClain Monday have Cowboys excited - Todd Archer, ESPN
Archer argues that the Cowboys should be a better team on Monday with the returns of Hardy and McClain.

"Obviously those are two talented guys who can make plays for us," Lee said. "For us, it’s focus on week in and week out. We can’t have the same lapse we had last week. We started off the right way the first two weeks and took a step back last week. We have to continue to get better. We can’t play like that. If we don’t play relentless and don’t play with the same discipline, we have to every week be the same and continue to get better and I think those guys can help but it’s also on the whole entire crew."

The Steelers And Cowboys Aren’t Dead Yet | FiveThirtyEight
There's a widely held belief that the Cowboys’ season is doomed because Tony Romo will miss at least eight games, and that will torpedo the entire team. Neil Paine of FiveThirtyEight ran the numbers, and he has good news for Pittsburgh and Dallas fans: Roethlisberger and Romo were important, but they weren’t everything. Watch this video to find out why. 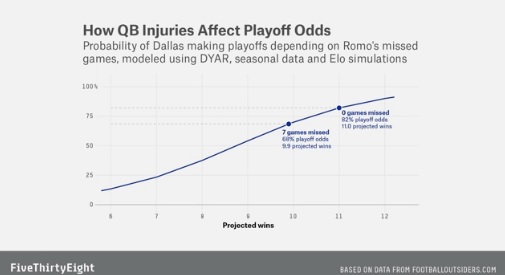 Bold predictions: Weeden throws four touchdowns - NFL.com
Get ready for Weeden-mania in Dallas. After replacing an injured Tony Romo, the Cowboys backup will go off this week.

Brandon Weeden has never thrown for more than two touchdowns in a game. His specialty lies elsewhere in the realm of mind-bending interceptions and head-scratching lobs. The player we saw last week against the Falcons, though, was more organized, finishing 22 of 26 with just one turnover. Weeden remains an aging project, but he'll feast against New Orleans, a winless team with one of the worst secondary units league-wide. Weeden bashers will need to wait another week to take aim at Big D's red-haired wonder.

Scout's Eye: Defense has to win the line of scrimmage | Dallas Cowboys
In addition to a run game that has to work through all four quarters, Broaddus argues that the key for the Cowboys to win on Sunday hinges on their ability to disrupt the Saints O-line.

If the Cowboys are going to win this game they are going to have to take advantage of this Saints’ offensive line -- which has struggled not only blocking second level players in the run game but also giving up inside pressure throwing the ball. Keeping the Saints’ line on the move and making them have to adjust puts a great deal of pressure on them.

The key for the Cowboys in this game will be how their front seven plays and whether or not they control Drew Brees.

Dallas Cowboys' pass rush 'not good enough' - Todd Archer, ESPN
The focus of the Cowboys' offseason was to improve a pass rush that had just 28 sacks in 2014. So far, that hasn't happened.

"It's not good enough," defensive coordinator Rod Marinelli said. "It's not. Not at a championship level that we want. And they know that. So we've just got to keep grinding and keep pushing each and every day and each and every week, try different guys in there, move guys around, maybe different matchups and just work at it. Come out and work at it. It's not good enough."

Bob Sturm: Why Lance Dunbar's catch total shouldn't upset Cowboys fans | Dallas Morning News
In a chat with fans, Sturm advises to worry less about Dunbar's position designation as a running back and focus more on his role in the slot.

Consider him a slot guy. Just like Wes Welker. Nobody minds him catching 100 balls. Does it move the offense? Then it is fine. Dunbar has been a real find this year. He is the least of the worries around here for me. Beasley and Dunbar should be a real tandem all season on each side of the defense.

Jerry Jones: Best answer for not having Dez Bryant includes more Gavin Escobar | Dallas Morning News
Against the Falcons, Brandon Weeden took what the Falcons were giving him and threw mostly short and intermediate passes. If that's going to change on Sunday, Gavin Escobar will likely have to be part of the equation.

The Cowboys owner and general manager is looking for the former second-round pick to take on a larger role with Dez Bryant out.

"Escobar does it differently, but he's got a huge [catch] radius, which means a wide way to throw it," Jerry Jones said. "Escobar, at 6-7, with a significant leaping ability and those arms should be able to contest balls right and left. That answers your question right there.

"He's certainly got the speed to get in the routes, so yes, I've always thought the real best answer for not having Dez out there is a combination of things, but included Escobar."

Garrett Looking For Williams, Other WRs To ‘Master’ Art Of Getting Open | Nick Eatman, Dallas Cowboys
Maybe after that they can focus on mastering the art of catching a ball.

"That's a big thing that I've really learned," Claiborne said. "Just sitting down with the coaches when I was sitting out, going in and seeing how they study film and learning the correct way to study film."

Uniform colors: Saints vs Cowboys - NewOrleansSaints.com
Because the Saints will wear white jerseys on Sunday, the Cowboys will wear their navy jerseys.

Christine Michael could make his Cowboys’ debut Sunday | Charean Williams, The Star-Telegram
Michael was inactive for the first three games after being acquired in a trade from the Seahawks at the start of the season, but insists he’s ready for whatever the Cowboys ask of him.

The tricky part is getting four running backs and a fullback on the 46-player game-day roster. The last time the Cowboys carried four running backs on their 53-player roster, in 2013, they had four active on game day only six times.

Michael has never played special teams, though he has worked with the scout team unit since arriving in Dallas.

"You’re looking at what his impact is," Garrett said. "So if he wasn’t a special teams contributor, you want to make sure that he’s going to contribute on offense in some way. And you’re not always going to be perfect with those assessments. Sometimes you have an idea that somebody might play a certain number of plays in a game, but then the game goes a different way, and he doesn’t play. You want to make those evaluations as accurately as you can, but they don’t always come out the way you want them to on Sunday."

Hey @SNFonNBC Dan Bailey has some new headshots for you... https://t.co/8T2KfHli2Q

Sabin: Why Rod Marinelli's Cowboys defense has succeeded where Rob Ryan's failed | Dallas Morning News
Rainer Sabin takes a long look at the transition from the 3-4 to the current 4-3 defense, and how that may have been hastened by Rob Ryan's short tenure in Dallas.

September was the first calendar month no NFL players were arrested in six years | USA Today
And a whole media industry almost went out of business.

"The fact that there are more fouls ... means that we are seeing more fouls," NFL vice president of officiating Dean Blandino said. "We have worked on our mechanics and our positioning, and we are identifying more fouls. We have had less questions from clubs about calls that were not made that should have been made. Historically, the majority of the questions we receive are about calls that were not made, and those questions are down so far this year."

Stop what you're doing and watch this video of teens taking selfies at a baseball game http://t.co/sZrf1bxViT pic.twitter.com/kK7nYx2Nsf