Dez Bryant: We have enough time to bounce back; Cowboys still run the NFC East | John Machota, Dallas Morning News
Bryant is listed as questionable for Sunday's game on the official injury report, but that's not keeping him from thinking about winning the division.

"We have enough time, we just got to continue keep on believing," he said. "We're a strong team. That's exactly what we're going to continue keep doing. We came out to practice today with high intensity. We're just going to keep believing and sticking with each other and hope for the best."

Dallas Cowboys: Dez Bryant listed as questionable, says if decision was left up to him, 'Hell yeah, I'm playing' | Rainer Sabin, SportsDay
Bryant wouldn't commit to whether he will play on Sunday or not and told the gathered reporters after practice that it wasn't his decision anyway.

"Don't know yet," he explained. "We want to see how I feel with this week of practice. It feels good being back there with my teammates. Practice has been great. I'm just trying to be smart about it."

"If the decision was left all up to me, of course, hell yeah, I'm playing," he said.

"I feel good," he said. "If I play, I'm not thinking about nothing. I'm playing. Dez is Dez. If I'm thinking, I have myself a little situation. So, just going to see."

Jerry Jones: Cowboys hope to keep Dez Bryant from overdoing Sunday warm-ups | Jon Machota, Dallas Morning News
Dez Bryant is in his sixth year as an NFL professional. You'd think that he'd have learned how to pace himself for games by now. Think again.

"You'll want to monitor his warming up," Jerry Jones said. "Dez is very capable of expending a normal player's entire energy package in his warm-up. So you'll want to watch that because he can't be in the same playing condition as he would have been had he played all year."

Okung suffered a toe injury against the 49ers last week, and it didn’t get any better as the week progressed. He was a full participant in Wednesday’s practice, but was limited yesterday and didn’t practice today.

Somewhere, Randy Gregory is grinning and Greg Hardy is, well ... look for yourself:

Wilson Ripe For the Picking For Cowboys Pass Rushers | Adam Boedecker, NBC 5 DFW
Russell Wilson has been sacked 31 times, or 5.2 times per game, this year, more than any other quarterback in the league. Boedecker argues that the chances are pretty good that Wilson could be in for a long day at the office against the Cowboys.

Well, despite the Cowboys' issues (there are many), this team can rush the quarterback since the debut of pass-rushing monster (and human-being monster) Greg Hardy and the return of rookie pass-rush specialist Randy Gregory. And the Seahawks? Well, they have some pretty serious protection issues.

Word of Muth: Dallas Dominates - Ben Muth, Football Outsiders
Another great article by Ben Muth on the offensive line's performance against the Giants. If you like Xs and Os, this one's for you, plus it has lots of GIFs and detailed breakdowns.

Even though the Cowboys lost their fourth straight game this past Sunday, I thought there was reason for some optimism for Dallas' offense. Yes, Matt Cassel threw three picks, but a couple of them were down the field, which means he was at least looking that way, which is an improvement over what they got from Brandon Weeden.

I also thought their offensive line played their best game of the year. The pass protection was great and the run blocking was almost as good. We're going to focus on the run blocking this week just because good run blocking is generally more entertaining than good pass blocking.

Need a reason to be optimistic, Cowboys fans? Look up front | Bob Sturm, SportsDay
In a recent Q&A, Sturm answered a question about the offensive line.

Question: The offensive line seemed to play better and even dominated for stretches last week. Is that all Collins? I want to hope that the '14 line can be here again.

Bob Sturm: It certainly is not all Collins. But, he helps. I think the line is getting better each week and is also finally getting a chance with a QB who is not allowing the defense to crowd the line. Martin and Frederick look solid again and Tyron is always Tyron. This is a good line. Hanna is back too and that helps.

Cowboys QB Tony Romo already throwing, eying return to practice - Will Brinson, CBSSports.com
Because he was puit on IR designated for return, the earliest date Romo can return to play is Nov. 22 against the Dolphins, regardless of how well he is progressing in his rehab.

Jason Garrett said Romo's been "throwing the ball a little bit lately" as the team continues to try and ease Romo back in.

"Obviously you want to get him out there doing something," Garrett said. "He has been throwing the ball a little bit lately and he looks good that way. You try to ease him back into it without compromising our preparation with the other guys to get ready for the game, so we'll talk about that more specifically when we get closer to it."

Dallas Cowboys: Cowboys safety Barry Church won't know until Sunday if he can play | David Moore, SportsDay
Moore explains how Church was injured, and why the decision to play will be a game-day decision.

Church injured the ankle on the New York Giants first kickoff return in Sunday's loss. He played the remainder of the game but missed several possessions as he had to have the ankle constantly re-taped.

The Cowboys have listed Church as questionable, meaning there's a 50 percent chance he'll play against Seattle. He was able to practice on a limited basis Friday after doing nothing the previous two days.

Rookie Byron Jones will take Church's place in the starting lineup if he's unable to go.

Absolutely not. Not to go all Herm Edwards here, but you play to win the game. [...] I don’t think there’s any way you think about tanking games. That’s not in any coach’s mindset. That’s not in a player’s mindset. That certainly can’t be in the owner’s mindset either. The Cowboys are looking at the return of Tony Romo as the chance to make a late-season run.

RG3 in a Cowboys uniform, as requested by Herschel Walker - Joe Gemma, Behance.net
Herschel Walker recently said, "If RGIII's got nothing to do, and Mr. Snyder doesn't mind, send him down to Dallas". This is what that would look like: 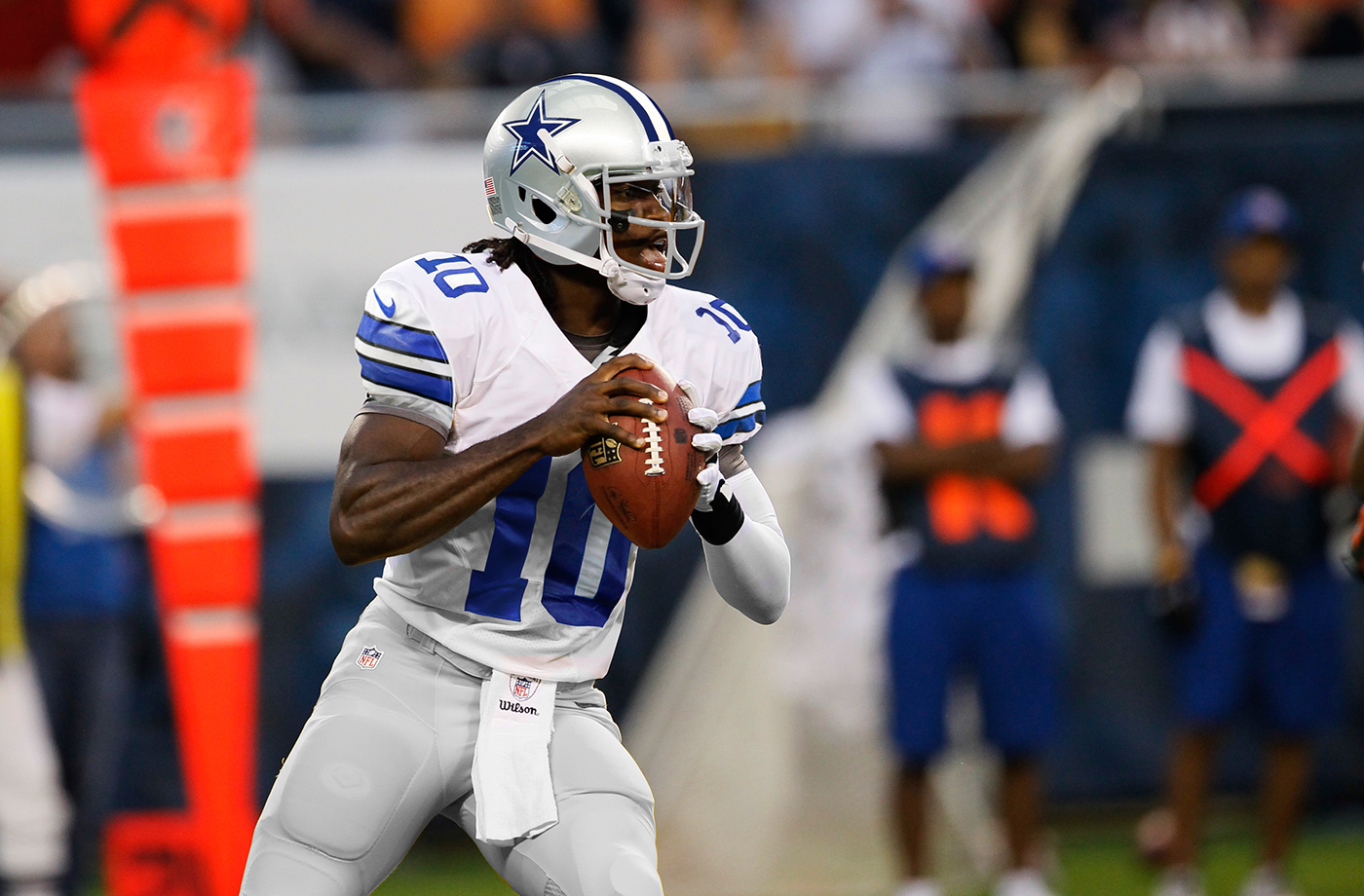 Everyone in the US of A (except for the Bay Area) is getting Seattle vs. Dallas for FOX's late game - imgur.com 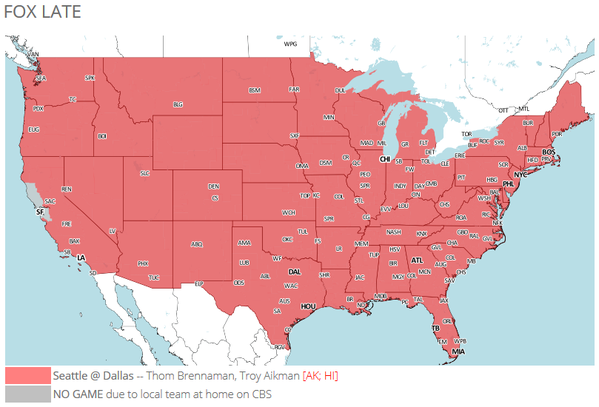