Information on the Dallas Cowboys 2015 Week 8 game against the Seattle Seahawks, including the game time, TV channel, how to stream the Cowboys-Seahawks game online, injuries, radio, odds, announcers, predictions, picks, and more!

Will he play or won't he, so much of the game turns on the answer to that question. Dez Bryant is officially questionable for the game after practicing on a limited-basis this week. Will he be able to play when the Dallas Cowboys host the Seattle Seahawks? Offering a guess, I'd say he does play, but a limited number of snaps. The Cowboys will use when he can be most effective - the red zone, third downs, as a decoy when they want to try a special play, etc.

This is a huge game for the Cowboys, if they fall to 2-5, it gets really hard to predict a path back to the playoffs. They will be hosting a Seattle team that has had its own set of issues this season and only sport a 3-4 record. One of the main issues is their offensive line, and they may be without left tackle Russell Okung. Greg Hardy and company will need to get after Ruseell Wilson, but they need to keep an eye on him too, they can't let him escape the pocket and pick up big yards with his legs. Rolando McClain may be doing a lot of spying this week.

Darren McFadden is the starter at running back with Joseph Randle out for this week. Can he and the offensive line follow up on their monster game running the ball from last week? That would go a long way towards neutralizing the Seahawks strong pass rush and solid secondary coverage. Matt Cassel knows he has to limit the turnovers, the one thing that costs the Cowboys dearly last week.

It's a pivotal game for the Cowboys, can they finally get their season back on track? 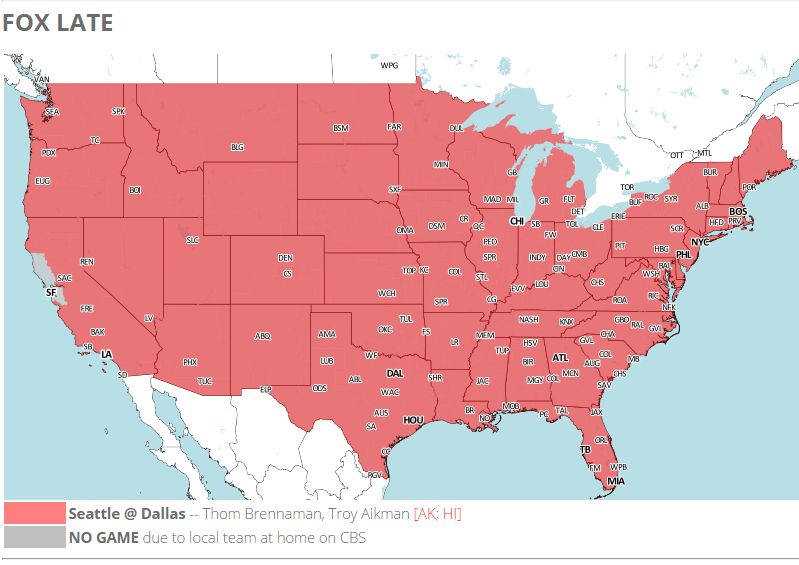 OUT - RB Joseph Randle (back)