NFL Power Rankings Week 5: Patriots Up Next For Cowboys. That Should Go Well.

A look at 19 different power rankings for the Cowboys, the rest of the NFC East, and the Patriots.

Share All sharing options for: NFL Power Rankings Week 5: Patriots Up Next For Cowboys. That Should Go Well.

Here's a look at the Dallas Cowboys and NFC East power rankings heading into week five of the 2015 NFL season.

Their once-promising season has turned sour because of injuries. How many can they handle?

Dallas is running out of playmakers. Add running back Lance Dunbar, one of the league's best receivers out of the backfield, to the list. He tore his ACL against the Saints.

The Cowboys' offense has been fine without Tony Romo and Dez Bryant. But the defense has no turnovers and has allowed 438.0 yards per game the past two games.

Brandon Weeden lost his 10th straight start, but this one wasn't his fault. After marching the Cowboys 91 yards to tie the game near the end of regulation, Weeden watched helplessly from the sidelines as the defense gave up the winning score on an 80-yard catch-and-run by C.J. Spiller in overtime. Now it's home to the red hot Patriots.

They led by 14 points three separate times against a pretty good Falcons team. They took the Saints to overtime on the road. So the Cowboys aren't helpless without Tony Romo. But at some point you need to produce some results. It won't be easier with the Patriots up next.

Brandon Weeden hasn’t been the reason for the two-game losing streak, but the offense is limited with him at the helm. With Greg Hardy (suspension) and Randy Gregory (injury) set to return soon, the defense has potential to carry the team if Sean Lee can stay on the field -- until Tony Romo and Dez Bryant return.

There's still hope that the Cowboys can do just enough until Romo and wide receiver Dez Bryant return. Like it or not, most of that hope runs through Weeden.

The hits keep coming -- except this isn't like the 1999 Rangers with Pudge, Palmeiro and Juan Gone. Nope, these are the IR kind. Lance Dunbar -- he of the University of North Texas (a fine, fine institution a certain NFL.com hack may or may not have attended) -- is now out for the season. Sean Lee is in the league's concussion protocol. The good news is ... Well, there isn't too much good news, other than the fact Dallas is hanging in games. At least the Patriots are coming to town. That should go well.

The Cowboys are 0-2 since Brandon Weeden took over as the starter for injured QB Tony Romo. It’s certainly not all Weeden’s fault. He actually did a pretty good Romo impersonation with his late-game TD throw to WR Terrance Williams in New Orleans on Sunday night. But it’s not working with Weeden and it will be interesting to see if Coach Jason Garrett turns to Matt Cassel, who was obtained in a trade after Romo was hurt, at some point soon.

If you're Matt Cassel, aren't you asking for another week to study the playbook rather than jockeying to face the Patriots?

Oddsshark: No. 9 (7). Oddsshark use a multitude of stats to establish an offensive and defensive power ranking, which they then adjust for the strength of schedule.

FiveThirtyEight - No. 10 (8). Elo ratings are a simple system that estimates each team’s skill level using only the final scores and locations of each game.

Sagarin Ratings: No. 12 (9). These are rankings based on W/L record, points differential and schedule strength.

Teamrankings.com - No. 14 (9). This site measures the relative strength of all teams using team performance, home/away status, margin of victory and other factors.

Massey-Peabody: 14 (17). These guys generate their predictions by working up from play-by-play data to calculate a performance figure for rushing, passing, scoring and play success.

BeatGraphs.com: 10 (. BeatGraphs provide rankings that cannot be defeated by a chain of A beat B beat C scenarios. In the end, when all ambiguity is removed, if A has beaten B, A will be ranked above B. Here's a sampling of their fine handiwork: 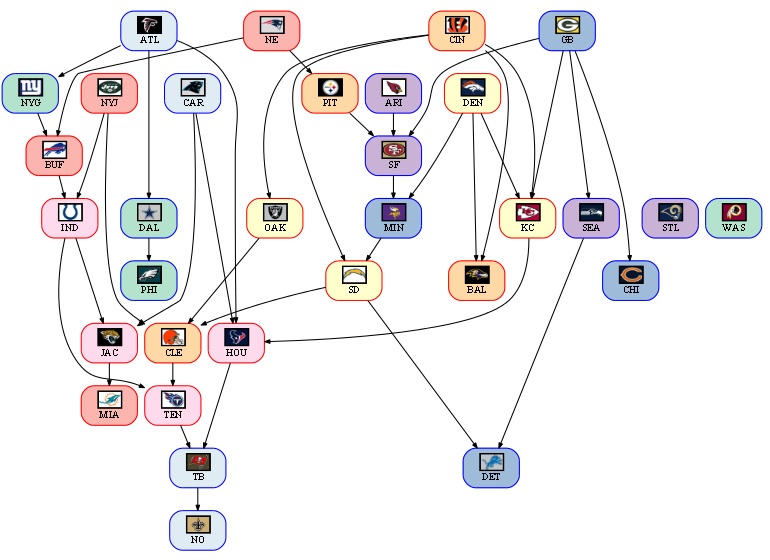 Coldhardfootballfacts - No. 15 (12). This indicator ranks teams based on their average ranking across a range of CHFF's Quality Stats.

Numberfire - No. 17 (13) These rankings are based on expected point differential against a league average team. If the team's rating is 10, they would be expected to win by 10 points against a league-average opponent.

The table below summarizes the power rankings for the four NFC East teams as well as the Cowboys' next opponent, the New England Patriots.

So, how do you feel about playing the Patriots on Sunday?