Mel Kiper has a 6-5, 321 defensive tackle going to the Cowboys in his latest mock draft.

The internet has taught me to hate on Mel Kiper. Endless jokes about the helmet-headed hairspray aficionado, his sometimes grating on-air persona, and the constant ridicule by scouting types who point out Kiper's lack of a football background left me no choice in the matter.

Then I looked up his track record on The Huddle Report. The site hands out mock draft scores every year and is widely recognized as "the most trusted and longest running such scoring available for NFL mock drafts." Here's a screenshot of the ten best mockers over the last five years. 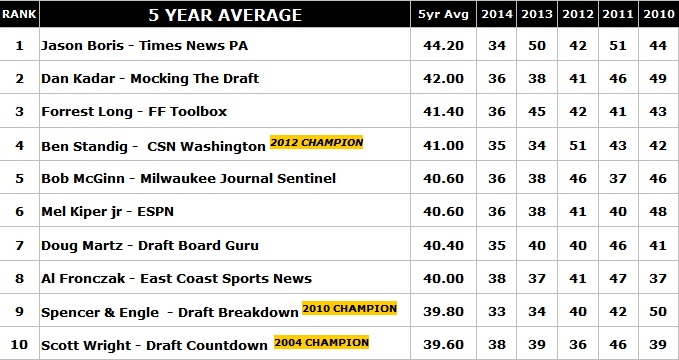 Kiper is sitting comfortably at No. 6, and has been one of the most accurate mock drafters around, regardless of what the internet says about him.

Today Kiper released his latest mock draft, and has the Cowboys picking a defensive tackle who's been sprinting up the draft boards of late.

I'm not sure there was a player who did more to gain appeal as a potential first-round pick at the Senior Bowl. Davis brings a coveted ability to be disruptive as a pass-rusher from the inside, as he won't just push the pocket with strength, but also can win with quickness and get into the backfield. The Cowboys have done a great job in building their offensive line and have made it possible to be one of the few truly balanced offenses, but any setback on offense could expose a defense that was better on paper than it was in terms of personnel in 2014. They could add talent at all three levels, but Davis would make a lot of sense if the board breaks this way.

On the CBS Big Board from January 21, the 6-5, 321 Davis was ranked 81st overall. Three weeks later, he's moved up to 39th on the CBSSports Board, and Kiper apparently sees him as a first rounder. Most other boards have Davis ranked somewhere in the mid- to late second round. Is Kiper just ahead of the curve, or is he overvaluing Davis?

Just as a reminder, on January 8 last year, the CBSSports big board had Aaron Donald ranked 53rd. Two weeks later, on January 20, he had already climbed to 36th, and would eventually end up getting picked with the 13th pick in the draft. Davis is not the same player that Donald is. But he could climb the draft boards in a similar way.

How would you feel about this pick?