As hundreds of NFL prospects descend on Indianapolis to be measured, assessed and tested, we provide you with some useful information on what those strange drills actually test. Here, in the third and final installment of our Combine Primer series, we take a longer look at the position-specific drills for defensive prospects.

In part one of this series, I took a closer look at the NFL Scouting Combine drills in which every player would participate. In the second installment, I offered an in-depth overview of the various position-specific hoops through which the coaches on the Lucas Oil Stadium field will ask offensive players to jump. Here, we'll examine the defense-specific position drills we can expect to see in Indianapolis on Monday and Tuesday. Let's start with the front seven:

The assembled coaches at the Combine will guide the defensive line prospects through a series of drills intended to measure body control, explosiveness and lateral agility. In the "three man bag drill," players slide along a makeshift line of scrimmage, hitting tackling dummies and touching down on bags; a body control drill asks them to charge forward from a three-point stance and break either right or left on a coach's command. There are also wave drills and "four bag agility drills" in which players start in a prone position, leap up, slide step over a set of bags, reverse direction, shuffle and slide between them, and then drive toward a coach with a ball, cutting in the direction the coach moves the ball.

The obvious money-maker for a D-lineman is rushing the quarterback, so it should come as no surprise that the main DL-specific drill has lineman pass rushing from roughly the right and left defensive end spots. Each player starts at a spot six yards outside of the "center," runs to a tackling dummy four yards behind the line of scrimmage, gets past it going to the left using a "rip" technique and to the right using a "swim" technique, and finishes up at a designated "quarterback" spot seven yards behind the line. This drill measures explosion off the ball and the all-important "bend and lean," a players ability to turn the corner at speed-and often with the body almost parallel to the turf. Want visuals? Your wish is my command: 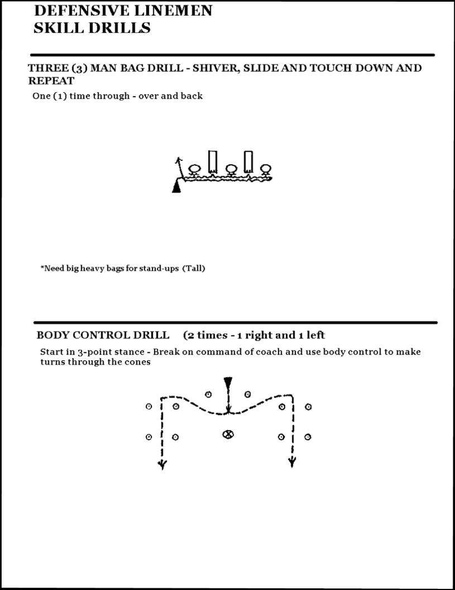 As I mentioned above, in a pass-happy league - especially with the emergence of the new breed of tight tends - linebackers have to be able to run and cover like strong safeties did two decades ago. The combine exercises for linebackers are designed with this in mind; although some LB-specific drills operate exactly like the pass rush drill for d-linemen, they primarily test agility and change of direction. For example, in the "four bag shuffle," linebackers pass over a set of bags three times, shuffling and sliding between them, slide stepping over them, and then sliding and touching down on each of them. Coaches also run LBs through standard wave drills, and a series of "backpedal and react" drills to test reactions, movement and ability to comeback to the ball.

The foremost of these drills is the "pass drop and hip rotation drill." The linebacker takes a 45-degree drop, following the coach's ball as he mimics a quarterback. After three direction changes, the coach will bring the ball down, indicating an underneath pass. The prospective linebacker has to plant, pivot and sprint towards the coach to "pick off' the pass. This drill tests how well prospective NFL linebackers lower their hips while moving in the open field, and how smoothly they can smooth and quick plant, pivot and transition. By showing good hip fluidity, a linebacker can prove to scouts that he can be an "every-down" linebacker.

Way back at the 2010 Combine, Sean Lee crushed this drill, showing the ability to stay balanced and to keep his feet underneath him while moving quickly and cutting sharply. I suspect that one of the reasons he was slotted so high on the Cowboys' 2010 draft board is that his Combine performance told the Cowboys braintrust that the quickness they saw on film was no lie: the kid had a first-round skillset to go with what they considered to be first-round tape. Here are the diagrams detailing the LB drills: 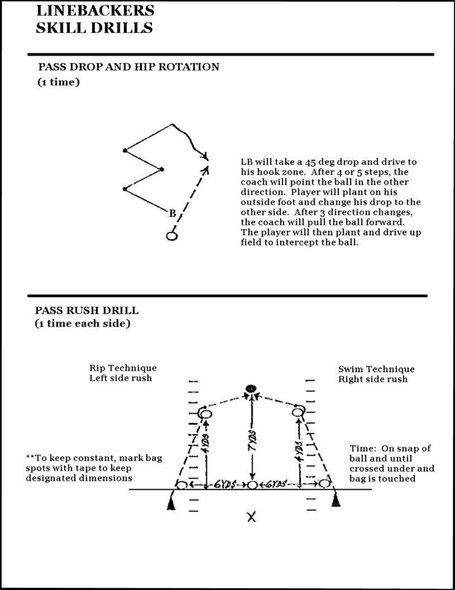 The Combine drills for defensive backs ascertain each player's ability to backpedal and to sink his hips, as well as change of direction, acceleration, ball reaction, and ability to track and catch the ball. Standard backpedal and turn drills (in which players backpedal and then turn 90 or 180 degrees) are topped off by the "pedal and transition" test. Each prospective DB backpedals, then turns at a 45-degree angle upfield, tracking a ball 40 yards from the line of scrimmage.

The cherry on top of this backpedaling Combine sundae is the "W" drill, which demands that players backpedal five yards, then break at a 45-degree angle, for 5 yards, backpedal 5 yards again, and then run 10 yards at another 45-degree angle. This is accompanied by more Ball reaction drills ask the player to begin faced away from a QB, then turn towards him to receive a pass. Also, they perform a 3-yard backpedal, break on the ball and try to intercept the pass. The premier DB-centric dill is the "close and speed turn," which has the defender backpedal for 5 yards, plant and drive forward 10 yards and then execute a full-speed turn, reacting to a thrown ball and catching it. This measures both change of direction and acceleration. Here they are, in graphic form: 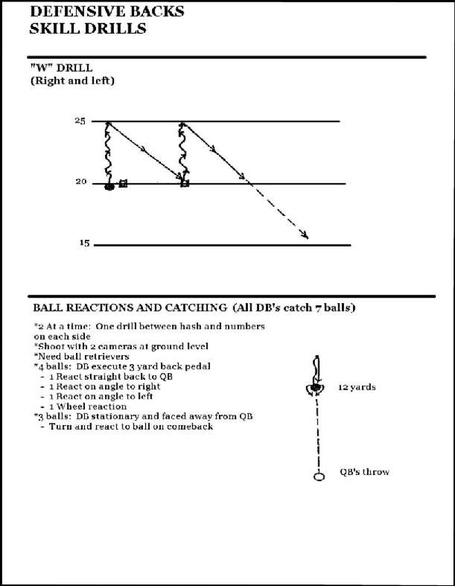 Want to know more about each of these drills? The NFL Network's resident draft guru, Mike Mayock, offers a nice video breakdown here. Click on "workout drills" to hear him opine on the general tests; click on "position drills" to get his input on the position-specific drills. Armed with these, you can, like the nerdiest of the draft nerds (guilty as charged), become an expert in the confines of your living room: call in sick, superglue yourself to your TV, brew a vat of coffee, and absorb the NFLN's around-the-clock Combine coverage!