Dallas Cowboys News & Notes: Is This DeMarco Murray's Final Week As A Cowboy?

Latest Cowboys headlines: Cowboys do not have an agreement with Murray that would allow them to match an offer from another team; Cowboys still have decisions to make with Dez Bryant; Yankees turn to Cowboys for dose of inspiration.

Share All sharing options for: Dallas Cowboys News & Notes: Is This DeMarco Murray's Final Week As A Cowboy?

Cowboys hope RB DeMarco Murray gives club chance to match free agent offers, but no agreement in place | David Moore, DMN
The Cowboys do not have an agreement with DeMarco Murray that would allow them to match an offer from another team. No biggie, says Stephen Jones.

"I wouldn’t say there’s any agreement,’’ said Stephen Jones, the Cowboys chief operating officer. "You hope so, but there are no guarantees."

"I think DeMarco wants to be in Dallas. We want him here. But we’re going to have to get our hands around what the best offer we can make for DeMarco, and we can’t let someone dictate that for us."

"There is an expectation that he will get back to us before he signs with another club. There’s a hope that he would. But that would be unfair to him and for other clubs to say he’s going to bring something back."

"We hope we get to visit with him. We’ll see what happens.’’

Cowboys still have decisions to make with Dez Bryant - USA Today
The Cowboys will secure Bryant with the $12.8 million franchise tag today, thus buying themselves until July 15 to strike a long-term deal with Bryant.

"Right now, that's the plan," Jones told USA TODAY Sports Sunday. "I told Tom [Condon, Bryant's agent] Friday I didn't think it was realistic to think we could get something done. "With Dez, we'll continue to work diligently on a long-term deal and see if we can make progress. Our goal would be to try and get something done."

Club likes Weeden as back-up but could shop around | Brandon George, DMN
There's virtually no pressure for the Cowboys to do anything at backup QB, but that doesn't necessarily mean they are going to sit on their hands all offseason.

"Everybody is always competing in this league," [Stephen] Jones said. "There is nobody guaranteed anything. That includes Weeden and everybody. If we can bring in another player, and if it makes more sense, we have to look at it."

Yankees turn to Cowboys for dose of inspiration | New York Post
Cowboys coach Jason Garrett gave the Yankees a motivational at their training camp practice over the weekend. Brian Cashman, Yankees GM, praised Garrett even though he wasn't able to attend Garrett's speech.

"I am a big Jason Garrett fan," Cashman said. "I had dinner with him during spring training one year, and he is a very high-end guy. I would have liked to been in the meeting, but I had another meeting."

Bruce Arians/Steve Keim: NFL's top coach/general manager duo - NFL.com
Jerry Jones just made off with the NFL Executive of the Year Award, and Jason Garrett coached the team expected to have the worst defense in the history of the league to a 12-4 record. But that leaves Adam Shein completely unfazed as he counts down the top ten coach/GM duos in the league without a single mention of the Cowboys.

Rosters could expand to 55 | ProFootballTalk
The Competition Committee is considering expanding rosters from 53 to 55. With the way the cap is currently expanding, adding to players to the bottom of the roster won't hurt the money people too much, and will please the football people to no end.

Competition Committee considers dumping inactive lists for Thursday games | ProFootballTalk
Another change under consideration by the Competition Committee is the removal of the inactive list for Thursday Night Football, and that exemption may well include the Thanksgiving games as well. The potential rule change would ostensibly help the teams playing on Thursdays on a short week, but it would likely raise a host of other questions. If teams playing on Thursdays get an exemption, do teams playing on Monday get an exemption too, or at least a partial exemption? What about teams playing in London? Or teams traveling cross country? Or teams having the misfortune of playing in Philly? Lots of questions on this one.

The cars all 32 NFL coaches totally drive - SBNation.com
You can tell a lot about an NFL head coach by what kind of car he drives. SBNation took it upon themselves to figure out what car each head coach drives. Here's what they think the NFC East coaches drive: 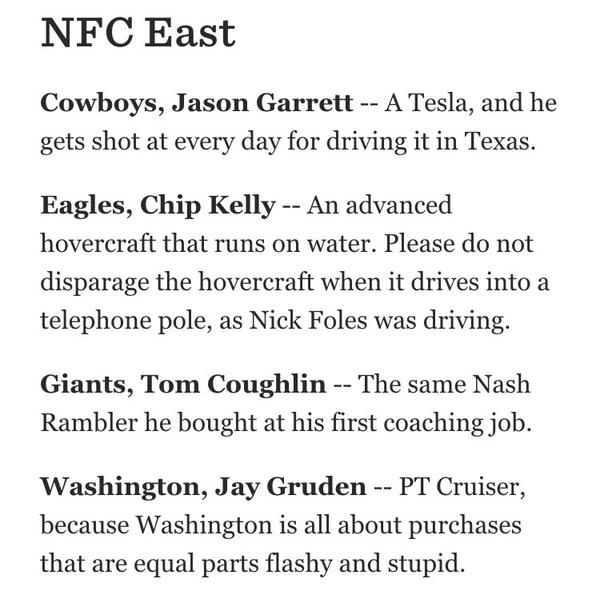