More names to add to the Cowboys' pre-draft visitor list.

About a week ago, David Moore of the Dallas Morning News articulated what every Cowboys fan was already certain of:

Every quality running back with a pulse is expected to visit the club before next month’s draft.

As it turns out, Moore was dead on the money, as Clarence Hill of the Star Telegram confirmed yesterday.

Melvin Gordon had already made it onto our pre-draft visitor track list, but the other names, while not exactly surprising, are new.

Incidentally, the second round is also where most Cowboys fans we polled yesterday expect the Cowboys to draft a running back. 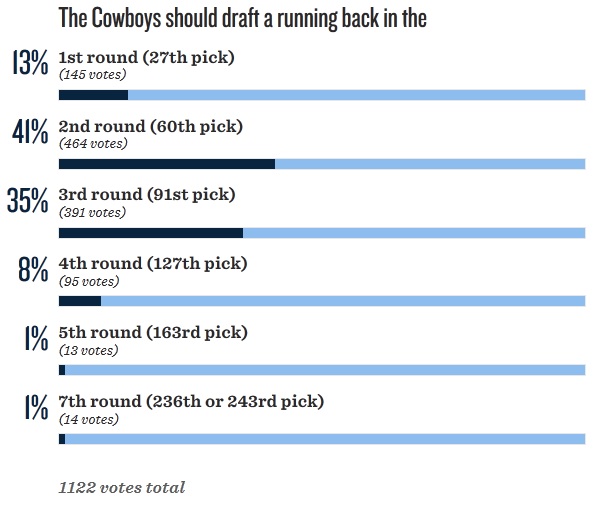 There's also a good chance that the Cowboys could wait until the third round or perhaps even later to pick a running back, just as they did with DeMarco Murray (3rd) and Joseph Randle (5th).

In any case, the Cowboys will likely bring in more than just those top five running backs, and Jerry Jones promised the Cowboys "are going to be to be real thorough with all of them," even if that doesn't automatically mean they'll take a running back. But if they do, it'll be a full-time back, not a specialist.

"We have a done a good job getting ready to play if we didn’t do another thing at running back,’’ Jones said. "But if that is where our opportunity is, we will take it.’’

"The top backs, all of those top backs, and we may have a down-the-line guy,’’ Jones said. "The guys we bring in will be full-time backs, not a specialist or third-down guy.’’

In related news, and a possible alternative to a running back in the first round, the Cowboys are also bringing in Wake Forest cornerback Kevin Johnson for a pre-draft visit.

Bob Sturm of the Dallas Morning News likes Johnson a lot for the Cowboys.

This player is high on my board as a guy who I feel great about. He has the mentality and the makeup that I look for in a corner, and unlike Peters from Washington, he is far more ready to attack the line of scrimmage and is a team defender which make his abilities far more useful to me. [...]

If you are Dallas and in need for a scheme fit with tremendous upside and looks to be a real value, I believe this player would be pretty high on the list if he falls to #27.

With the names above and a few more lower key invitations, our pre-draft visitor tracker is beginning to take shape. For better legibility, the players are subdivided by the likely type of visit they'll have with the Cowboys.