Latest Cowboys headlines: Tony Romo is an instant hit on Twitter; Cowboys have real depth on the defensive line; Dez Bryant was at Valley Ranch, but not for contract talks.

Looking back on it...it was a catch :) pic.twitter.com/jq29XpkGAn

Video: Joseph Randle's Best Runs of 2014 | Dallas Cowboys
From the mothership comes a timely reminder that Joseph Randle wants a bigger piece of the action this year. This video features Randle's best inside runs of 2014.

Rod Marinelli has more options to rush passer - Todd Archer, ESPN Dallas
Marinelli likes the options free agency and the draft have given him up front, but knows there's still a lot of work ahead.

"We've got more talent, movement, all those things," Marinelli said. "Now, that's got to be worked into production. We've got to go produce with it and that takes a long time, a lot of training. The one thing all these guys have is a real love and care about being a ballplayer to work at it. That's our job. Right now it's conditioning, strength and tying all that together with technique down in and down out."

"We had a bunch of men last year who did that, really played hard. And that is not something you can come to a conclusion and say, 'Oh, we have that.' You never have that. Ever. So we start again with the basics of the system."

"We've got a lot of guys back from last year," Marinelli said. "Now we lost some real good men too up front, but the men that are back from Jack Crawford and Mince, some real tough guys, Nick Hayden and Terrell McClain. They were a big part of this thing in terms of developing a toughness and the effort of that group. As we bring more men in and we get some young guys from last year with a chance to display their skill, now it's still about heart."

Moore: Rookie Gregory made 'huge mistake,' but Cowboys have many reasons to think he'll be a star | Dallas Morning News
David Moore offers an excellent longform piece on Randy Gregory that details Gregory's journey to the NFL and the Cowboys.

Broaddus: "There really is depth on defensive line." | Dallas Cowboys
Broaddus with a quick rundown of the players at left defensive end.

You might not believe there is depth at a position like defensive line, but there really is. I like what I have physically seen from Ben Gardner and the possibility of him lining up at left defensive end, but keep a special eye on Jack Crawford and what he might bring. With DeMarcus Lawrence the likely starter at that spot, Crawford is going to be given the opportunity to play a major role as a key backup at that spot. Where he really fits is as a first- and second-down defensive end who can move inside and rush from the tackle spot.

Crawford is not a great athlete, and there are times where he will struggle with his bend, but the fact that he can play either end or tackle makes him a very valuable player. I believe that the only thing that set him back last season was injury, but this player has a chance in a rotating system.

Spagnola: Dez at Valley Ranch, But Not For Contract Talks | Mickey Spagnola, DC.com
If you got your hopes up about a long term deal for Bryant when word leaked yesterday that Bryant was at Valley Ranch, Spagnola has some harsh words for you.

First of all, saw when word leaked out Dez was in the house that folks started putting two and two together again and came up with a signed contract. Nope, not at all, and sure didn’t seem like much of anything with the negotiations had changed. What changed, though, is what I always thought would, and another sign of just how much Dez Bryant is committed to this team, committed to this organization.

"I wanted to be here for my teammates," Dez began telling me.

Of course he did, and also to fill his need to be with his teammates. Dez realizes at some point this contractual stalemate will end, that the two sides will compromise on a long-term deal, making each quite happy, or he will play for his current $12.83 million franchise tender.

"In the past two years that locker room has changed," Dez said, and he means for the better. "There is something special in there."

I'll be honest: We don't see much at rookie minicamps and they don't really do all that much, so making any judgments -- good or bad -- off three hours on the field for two practices should not be taken as gospel. [Byron Jones] looks the part. He acts the part. He listens. He wants to do what the coaches are telling him. We'll see more as the offseason goes along and even more when we get into training camp. I'll have a better feel this summer but I don't think the Cowboys have any second thoughts based on what they have seen right now.

The Cowboys announced the signing of former Texas Tech offensive lineman Reshod Fortenberry. Fortenberry, who started the past two seasons at right tackle for the Red Raiders, impressed the Cowboys enough as a workout player at last weekend’s rookie minicamp that they are keeping him around. Fortenberry replaces guard Daniel Quave, who was waived.

Top 10 NFL quarterbacks of 2015 - NFL Videos
NFL Media's Elliot Harrison breaks down his top 10 quarterbacks entering the 2015 season. Notice how the NFC East only has one QB in the top ten: 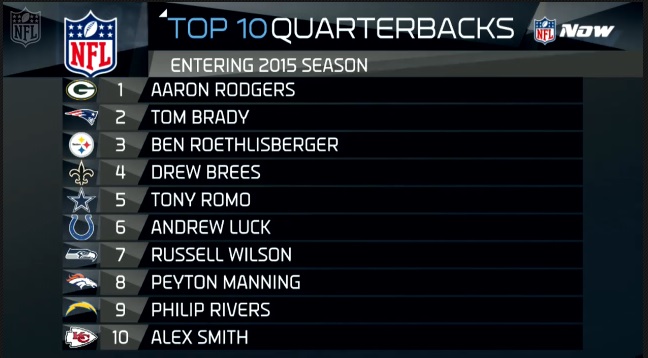 Tom Brady's impact on NFC East race - ESPN Philadelphia
In this article, Phil Sheridan complains about how unfair it is the Cowboys will not have to face Brady but the rest of the NFC East will. This is written in a perfectly serious tone, which makes the whole thing even funnier.

In case you're still wondering what the Cowboys saw in third-round pick Chaz Green:

In 556 snaps last season at Florida, #Cowboys 3rd-rounder Chaz Green didn't allow a sack and had no holding or falst start penalties.

First Things First: Rookies Learn Importance of Community - 5 Points Blue
One of the first videos the Cowboys rookies (drafted and undrafted) saw during rookie orientation this week is one about the Cowboys' focus on community and the responsibility to give back. Watch it, you will not regret it.