As we begin OTAs, and reports emerge extolling the play of the Cowboys most recent draft crop, it's important that we take a step back and recalibrate our expectations to the actual historical performance of first-year players. Here, in the second installment of our thus-popular series, we look at historical success rates by draft round.

As we sit on the cusp of the first of the Cowboys OTA sessions, it's important that we tap the brakes a little on the Randy Gregory-deserves-to-wear-number-94 talk, or even the Damian Wilson-can-be-this-year's-Anthony-Hitchens talk. Simply put, these players, and the rest of the 2015 crop, have history stacked against them.

What history, you ask? Well, draft history. To support this claim, I'd like to turn your attention to several historical studies. The first is a blog post by a group called datascope analytics, which examines the last 50 years worth of data to determine "bust" percentages in the NFL draft. The first order of business when undertaking such an exercise, of course, is to establish what constitutes a bust. For the folks at datascope, it's that the player starts for less than one year or plays fewer than 40 games in his career. Using this definition, they come up with the following graph: 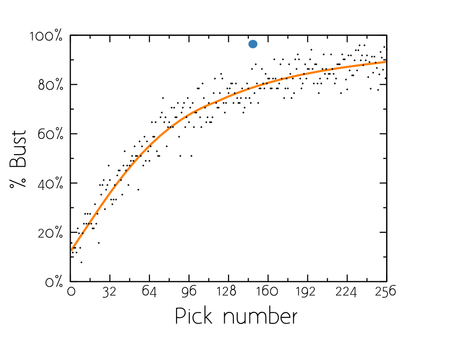 A quick look at this chart reveals that, historically, pick 60 - where our Beloved 'Boys selected Randy Gregory - gives a team only a slightly better than 50-50 chance of finding a one-year starter/ 40+ gamer. Picking at #91, Dallas' selection spot in the third round, decreases a team's chance of finding a starter falls to roughly 33 percent. The article adds an interesting note:

...an NFL team has a really slim chance of finding the next Tom Brady in round 6 or Donald Driver in round 7. The data shows that finding a starter in round 6 or 7 is only 10 - 20%. Further strengthening the argument to search for players that are effective on special teams in later rounds. Finally, see pick 148 on the graph (highlighted in blue). In the past 50 years, only two players picked 148 have started more than one year and played in at least 40 games.

As this suggests, it's extremely rare for a team to find a starter on the third day of the draft; perhaps 30 percent of NFL starters come from rounds 4-7, and by the time we get to the final round only one in ten will start for a full season or play more than 40 career games.

Other sources have arrived at similar conclusions. Just before the start of the 2013 draft, the New York Times published a useful and fun interactive draft graphic, one that seeks to do the opposite of that at datascope: track the percentage of top performing players by round. Although they are less clear about what constitutes a "top-performing" player (starts, Pro Bowls, and the mysterious "other factors"), the numbers end up about the same: fewer than 40% of the most productive players are taken after round one (the interactive aspect of the graph is a slide that allows you to change the "threshold" that determines success. Curiously, the higher the threshold, the higher the percentage of late-round success).

And there's more: In late 2011, a post on a Cleveland Cavaliers website, of all places (what else were they going to do while waiting patiently for LeBron James to return?), presented a slightly different rubric for judging draft picks but nevertheless arrived at remarkably similar conclusions. The author, known only as "Matches," took all NFL drafts from 1999-2006 and consigned each pick to a different NFL success tier, ranging from superstars to guys who played (not started, mind you, but merely played in) eight professional games.

What are the chances of finding a day-three starter? 8-9% of fourth-rounders become above-average starters; 6% of fifth-rounders do, followed by 4% of sixth-rounders and 5% of seventh-round picks. For a bit of perspective, consider this: almost 70% of players chosen at the beginning of the fourth round - well before the draft's halfway point - fail to qualify for Matches's "depth" category, meaning that they never manage even to become below average starters or regularly-contributing backups.

If this amateur sleuthing and statistical acumen doesn't convince you, perhaps Cade Massey will. Massey, you may recall from the BTB post of which I am most proud, is a professor at Yale whose specialty is the psychology of overconfidence, particularly as it applies to making decisions in uncertain environments. In the aforementioned post, I noted a lecture Massey delivered in early March at the 2012 MIT Sloan Sports Analytics Conference, entitled "Flipping Coins in the War Room." In it, he makes some startling points about the draft, setting them up by first establishing (using a variety of criteria) what the league-wide expectations are for each draft pick, from the first selection to Mr. Irrelevant, over a sixteen-year period.

In the slide show accompanying his lecture, Massey offers a Lowess curve tracking these expectations for players drafted from 1991-2004 (if you hit the link, it's the second slide). According to Massey, the first player drafted in the second round has historically been about 70% as successful as the first player taken overall; the guy chosen at the top of round three would be roughly 50% as successful, and so on. By the time we get to the 163rd pick (where the Cowboys took Purdue defensive end Ryan Russell), the expectation is that the player approximately 18% as successful as, in this case, Jameis Winston.

And this gets worse, of course, when we get to round seven. Given that the first overall selection includes the likes of Aundray Bruce, Steve Emtman, Ki-Jana Carter, Courtney Brown and JaMarcus Russell, we should pause before we uncork the anointing oil for the likes of Laurence Gibson, Mark Nzeocha or Geoff Swaim. According to our friend Matches, only 55% of seventh-rounders even played (much less started) in as many as eight NFL games. In the seventh round, the determiner of success is reduced to this: finding a guy who will get a few snaps here and there. The odds of finding a starter in the 7th round, depending on one's criteria, lie somewhere between ten-to-one and twenty-to-one. Them's not great odds.

As I noted in part one of this series, this data is not intended to send us into an infinite depressive regress ("The Cowboys drafted a bunch of seventh-rounders! They will never be good!") Rather, the point is to temper our expectations; it will be easier on our already frayed football psyches. And, perhaps more importantly, it will allow us to more fairly assess the performance of players like Russell, Gibson, and Swaim. They already face long odds; they don't need us heaping a frustration bred of their inability to meet our unrealistic expectations upon them.