If You Could Have One Player From Each NFC East Team ...

If you could have your choice of one player from each NFC East team for the Cowboys' 2015 roster, which three would you pick?

Share All sharing options for: If You Could Have One Player From Each NFC East Team ...

The NFL Network is bridging the dead period of the offseason by counting down the "Top 100 Players of 2015". And surfing in the wake of the NFL Network ratings juggernaut are many pundits and talking heads who are putting up their own lists of who they consider the best players in pro football. So instead of waiting until the NFL Network has finished its countdown, we'll check out CBS Sports' Pete Prisco, who published his own Top 100 at the beginning of the month.

The top Cowboy on Prisco's list, and the highest-ranked player in the NFC East, is Dez Bryant, who comes in at No. 11. Here are the other NFC East players on Prisco's list:

There's obviously a lot that can be criticized about Prisco's list, or any other list for that matter. And as I reviewed the rankings for the other NFC East teams, I began to wonder whether these guys really are the best players on the roster of our division rivals.

Which leads me directly to the question of the day: If you could have one player from each NFC East team for the Cowboys' 2014 roster, which three players would you pick?

Here are my picks:

New York: It would be easy to pick Odell Beckham here. After all, he's the guy getting all the media love in New York right now. But the Cowboys are doing just fine at wide receiver, thank you very much, even if many observers and even some of the Cowboys' own fans may not see it that way. But all three Cowboys wide receivers rank in the top 13 in Football Outsiders' DVOA metric (Defense-adjusted Value Over Average). 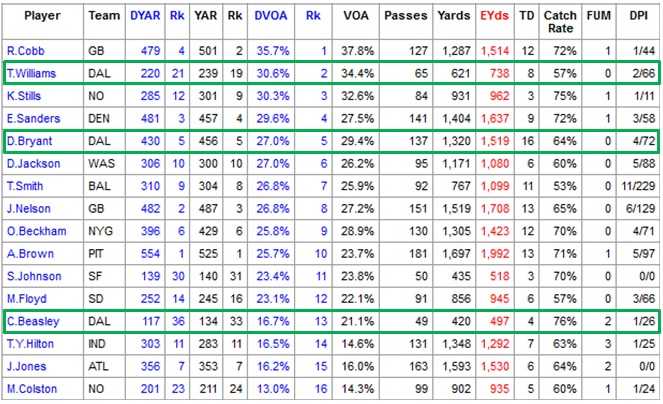 But if I'm ruling out the receivers, there really isn't much left on offense. They have a below average quarterback, a suspect offensive line, and a middle of the pack running game. I'm not touching their linebackers, they have too much fluctuation in the secondary, so that basically leaves the defensive line, where both Johnathan Hankins and Jason Pierre-Paul would be a nice get. And given the talent the Cowboys have at DE already, I'm picking Hankins as my 1-technique.

Washington: Which player do you pick from a mess of a team that went 4-12 last year? If you're going strictly by last year's performance, almost all the big names are out. I'd take Robert Griffin on a moderate backup contract, but that's not going to happen. Washington's two best players are probably Trent Williams and Ryan Kerrigan, and both would be good picks, but how much would they help the 2015 Cowboys?

Jason Garrett loves having a fullback on the roster, but hasn't had any luck finding a really good one. Over the last six seasons, the Cowboys have used five fullbacks, none of whom were particularly impressive. Redskins fullback Darrel Young could change that. Young is a converted linebacker who blocks hard, but also offers versatility beyond being just a pure blocker. He's a solid runner and receiver, rushing for three TDs last year and adding two more on receptions. The Cowboys are going to need some help in the ground game this year, why not from a fullback?

Philadelphia: The obvious choice here is of course DeMarco Murray. I don't know how often I've heard someone say that if only the Cowboys had kept Murray, they'd be Super Bowl favorites. And while that makes for a good soundbite, it also is symptomatic of a fundamental misunderstanding about what the Cowboys were about last year. I'll let my esteemed colleague rabblerousr explain:

The convenient national narrative is that the Cowboys won because of DeMarco Murray. Since they lost him, and didn’t replace him with another immediately recognizable name (and McFadden is recognizable, but has already been placed in the "bust" category), the thinking is that Dallas must therefore be weaker.

All of those will continue, except good health, which is the great unknown. The fact that the Cowboys have gone young is likely to lead to better health generally, but it's no guarantee that they won’t see another 2012-like rash of injuries, which will make another 12-4 season very hard to achieve.

If that were to happen, the national media would, of course, blame it on the loss of Murray.

Sure, it would be nice if could have Murray back, perhaps he has another one or two good years left. But when I look at the Eagles, the thing that worries and impresses me at the same time is their defensive line. And if I could pick Fletcher Cox, I would badly hurt Philly's line and improve the Cowboys' line at the same time.

So there you have it, two defensive tackles and a fullback. This may be old school, but remember, they tore down my school to build the old school. Maybe not the most popular choices, but choices that would help the 2015 Cowboys. Of course, you could make case that picking three former players (Dwayne Harris, Jason Hatcher, and DeMarco Murray) would be an excellent option too.

Which players would you pick and why?