Ranking NFL Quarterbacks By How Often They Stink It Up

Some QBs stink it up more than others. We take a look at the current crop of NFL QBs and wonder which QBs have more bad games than others.

Share All sharing options for: Ranking NFL Quarterbacks By How Often They Stink It Up

A little over a month ago, in a post titled "Ranking NFL Quarterbacks By Their Number Of Good Games Per Season", we looked at the "Good game percentage" (100+ passer rating games as a percentage of total games started) for the current crop of NFL quarterback.

Today, by popular demand, we're going to look at the bad game percentage for currently active NFL QBs. But how can we define a "bad game?"

The passer rating as we know it today (not to be confused with ESPN's QBR) was initially presented by Don Smith in 1973, then working for the Pro Football Hall of Fame, and has been used ever since. For all its criticism, it is widely recognized and used as the measure for passing efficiency. Its initial objective was to create a single number that would differentiate between outstanding, excellent, average and poor performance.

Below are the metrics that the developers of the formula felt best denoted those performances at the time, and which they combined into the passer rating we know today.

The graph below shows the development of the league-wide passer rating since the merger in 1970. From an average in the low sixties in the early years of the merged leagues the passer rating has climbed steadily and has been consistently above 80 since 2007. 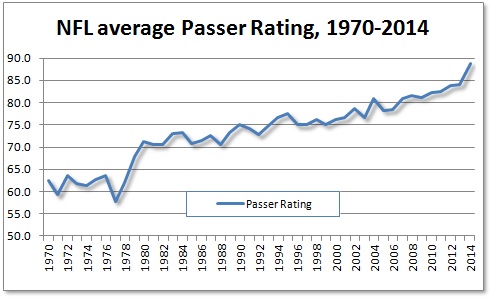 Here are three examples of what such a "bad game" can look like for a QB. The first is Tony Romo's stat line from the 2011 loss in Philly (34-7) in which he recorded exactly such a 66.7 passer rating. The second is Russell Wilson's loss against the Cowboys last season, the third is Aaron Rodgers' loss against Buffalo last year.

The numbers illustrate that by today's standards anything below 66.7 is a really poor game by the QB, and it's no coincidence that all three QBs in the table above lost the game in question.

Pro-Football-Reference.com shows that there were 84 nominally active QBs in the NFL in 2014 who have thrown for less than a 66.7 passer rating at least once in their career. The combined W/L record of those QBs in such games is 217-805-1 for a decidedly unimpressive .212 winning percentage.

To find out which of the QBs in the league have stunk it up the most, we'll first look at 29 active NFL QBs who've started more than 32 games in their career and look at some of their metrics in sub 66.7 games. Minor note on the data I'm using: All QB data here is from games in which the QB started, and in which he had at least five completions. This avoids penalizing guys who may have come in late in the game and removes games in which the starter had to leave early, usually due to an injury. With that out of the way, here's the data neatly laid out in a sortable table:

Follow this Pro-Football-Reference link if you want to play around with the base data. For example, you could include all QBs between 1998 and 2014, not just the currently active QBs; you could include playoff games if you want to; you could put in a filter for the minimum amount of pass attempts needed to qualify; you can do whatever you want, but for now you're stuck with the parameters I defined.

The table is already pre-sorted by the column titled "Bad Games in %," which allows you to see the quarterbacks with the lowest percentage of poor games at the top of the table. At the very top of the rankings you'll find Aaron Rodgers with a significant lead over the next best guy. I'm a big fan of Tony Romo, but I will call Aaron Rodgers the best QB in the NFL without any reservation.

There's quite a significant gap between Rodgers and the next best guys, four QBs who are all tightly bunched between 11% and 13% bad game percentage: Tom Brady, Robert Griffin, Philip Rivers, Peyton Manning, and Tony Romo make up the first tier of QBs after Rodgers. They are followed by a second tier of six more QBs who all have a bad game percentage of 15-20% (Drew Brees, Matt Ryan, Ben Roethlisberger, Colin Kaepernick, Matt Schaub, Russell Wilson), and this second tier closes out the list of the top QBs in the league - as measured by the amount of times they stink it up.

It is worth noting that of the 12 QBs topping the table above, Griffin, Kaepernick, and Wilson are three relative newcomers in the league (and Andrew Luck, Cam Newton, and Ryan Tannehill just miss out on the top 12). Not many of these names would show up at the top of most QB rankings, but here they are. Perhaps these young QBs are coached to take less risks, perhaps they don't think they are super heroes who can make every throw, perhaps their mobility gives them an option older QBs don't have, perhaps sample size issues are simply distorting the picture here. Whatever it is, these young guns are throwing much fewer stinkers than many of their more experienced colleagues

You know how there's this meme that "Tony Romo is always good for two or three inexplicably bad games per season"? Well, it's true. But those two bad games rival the very best QBs in the league, and are a lot better than guys like Matthew Stafford (3.7), Eli Manning (4.4), Sam Bradford (4.6), or the incomparable Mark Sanchez (6.2). Of course, fans of Mark Sanchez (74.1 career average passer rating) will dispute that 66.7 constitutes a bad game in the first place.

Then again, Eli Manning has a bad game percentage of close to 30% and plenty of people think he's a good QB, so there's always that.

Which brings us neatly to the next topic, the W/L record of QBs in games with a passer rating below 66.7.

How teams bail out their QBs on a bad day

The last column in the table above shows the win percentage of QBs in sub 66.7 games. If you sort the table by win percentage, the first thing you may notice is that there's an incredible spread of winning percentages. The Miami Dolphins have not won a single one of the 10 games in which Ryan Tannehill had a passer rating below 66.7, thus Tannehill's .000 win percentage.

At the other end of the spectrum, you've got Russell Wilson with a winning record of .444, which is ridiculously high considering that in those games Wilson delivered a dirt-poor performance as a passer. Going by the win percentages in the table above, other QBs who have seen their teams bail them out much more often than the average QB include Matt Ryan, Andy Dalton, Carson Palmer, Tom Brady, Philip Rivers, and Eli Manning.

It's a good thing that, contrary to popular perception, Tony Romo doesn't have a lot of poor games with a sub 66.7 passer rating, because the rest of the Cowboys have left him hanging more often than not. With a .125 winning record in poor games, Tony Romo ranks near the bottom of all active QBs.

Think about that. That's the type of player Romo could be - with the right team around him.

Of course, that hypothetical 90-33 W/L record (divided by 7.5) is the equivalent of a 12-4.4 W/L record, which is about as close to the Cowboys' 12-4 record from last year as you can get, and suggests that the rest of the team finally played up to Romo's level.

I didn't include some of the younger QBs in the table above, because I felt that the small sample size (less than 32 starts) would likely distort the overall picture. But for completeness's sake, here are eight more QBs who've had between one and two seasons worth of starts in their NFL careers so far. Same logic applies as it did in the table above.

If you thought this post has a familiar feel to it, you're right. I published very similar posts the last two years, but for the second year in a row I received a reader request to update the post with the latest data, so that's exactly what I did.