This summer's hotly contested Midsummer Madness tourney culminated in an impressive victory by Tom Landry. Here, the front page writers celebrate the man who wore the Fedora by sharing what he meant to them.

Our Midsummer Madness tournament has concluded, and our winner is none other than Tom Landry. This is no surprise, since he was the granite face of the franchise for almost three decades, and contributed so much to the Cowboys legacy, culture, and winning tradition. Clearly, our readers felt this way, as Landry fairly sailed to victory, besting the following opponents:

Capping off the tournament with convincing wins over four consecutive Hall of Famers is an impressive feat; the fact that the final two, Lilly and Staubach, are arguably the two best players in franchise history makes it all the more so.

I thought it would be fitting to celebrate Landry's title run by giving each of us an opportunity to stand up and share personal impressions, stories, and reminiscences on the "best" Cowboy of them all. I've solicited the other front page writers for their stories. After you crack open a bottle of something suitably celebratory, give these a read, wipe a proud tear or two from off your face, then go to the comments section and post your own encomium.

Dave Halprin: Growing up watching the Dallas Cowboys with Tom Landry as the head coach, I just assumed that all head coaches were supposed to wear fedoras and suits. On the sidelines, he was always calm and in control, it made me feel like the team was always doing exactly what it was supposed to do, that everything was going according to plan. Of course, as I got older and I understood the nuances of the game, this idea changed, but his approach to the game has always stayed with me. Try to not get too high or too low based on the situation, and trust in your plan. Trust in what you believe and that it will work. For the Cowboys it certainly worked with Landry as head coach for a long time.

O.C.C.: I first stumbled over Tom Landry as a 7- or 8-year old, when my dad brought me a comic book titled "Tom Landry and the Dallas Cowboys" that detailed Tom Landry's ascension with the Cowboys culminating in the first Super Bowl win in 1971. I had no clue about American football at the time, but I really liked the comic book about a sport that I had never heard about or seen. 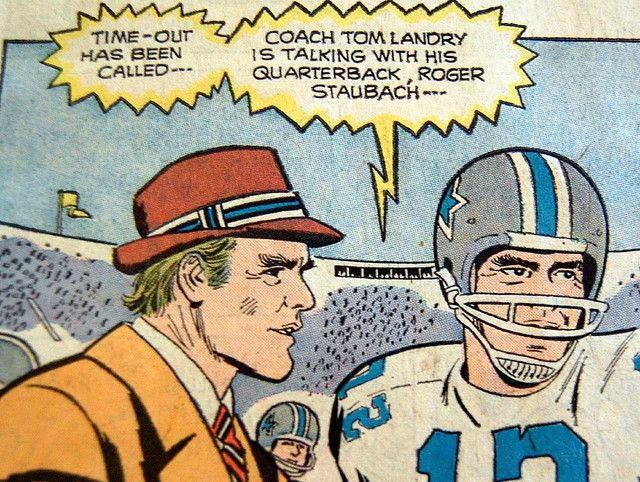 In 1981, my family moved to America (Columbia, South Carolina) for a year, where I attended 5th grade, and that was the first time I actually saw Tom Landry (and American Football) on TV. But as an impressionable youth, the stoic guy in a fedora didn't really impress me much and I paid much more attention to Tony Dorsett and Danny White.

Tom Ryle: For me, Landry was simply the embodiment of everything a football coach should be. I was fortunate to have become a fan of the team just when the Cowboys were starting to become a power in the NFL, and Landry was a towering presence on the field. His famed fedora was just the most visible part of he appearance, always so well-dressed on the sidelines. He had an air of dignity and reserve around him that demanded respect from everyone. He never did anything that reflected badly on himself or the team.

But most importantly, what a coach he was! Innovative and brilliant, the rest of the league had to catch up to him in many ways the first two decades of his career. Yes, he had some very talented players, but he was so good at putting them in the best position to succeed. His iconic look matched his iconic status as the man who made the Cowboys truly America's Team. I will always be sad his departure was bungled, but nothing can take away from his legendary accomplishments on the field.

Dawn Macelli: As a coach, few have equaled the contributions that Tom Landry made to the game and to the team that embodied the culmination of the efforts he invested over the course of a lifetime. From the team's inception for the 1960 season until his dismissal after the 1988 season, Coach Landry was the architect of one of the most successful spans in the history of sports. His achievements rank alongside the efforts of men like former UCLA basketball coach John Wooden, Boston Celtics coach and president "Red" Auerbach, and Grambling State football coach Eddie Robinson. These men not only found great success in their sports, but they transcended the game at the same time. They were not great sportsmen, they were great men.

During a coaching tenure that lasted 29 seasons, all with the team he stated, Tom Landry complied a career coaching record of 270 wins, 178 losses, and 6 ties. In the playoffs his record was 20-16. His teams won two of the five Super Bowls they participated in. In addition to the two championship rings he earned as a coach, Landry also won another as a player with the Giants. On the football field he was a Pro Bowl and All-Pro player, a coach of the year multiple times, and one of the games great innovators. His coaching achievements were deemed worthy of enshrinement into the hallowed halls of the Pro Football Hall of Fame. Away from the game Tom was very active in his church, a man dedicated to prove himself worthy of the blessings his God bestowed on him, and a living example to others.

More than the way he played and coached the game it is the way that Landry lived his life that makes him the greatest of all the Cowboys. Tom Landry had priorities in his life, and those remained firm until his passing; God first, family second, and finally football. He devoted everything he had to those priorities, and as a result, he earned the respect of those in and out of the game. There is no greater name in the lore of the Dallas Cowboys than Thomas Wade Landry, Sr.

Michael Sisemore: Though I'm a lot younger than some and was only alive for one year of his tutelage, Tom Landry is not lost on me. I've read countless books and watched many documentaries and interviews, the man revolutionized the game that we all love today. If Vince Lombardi created offense, Tom Landry was the innovator of how to play defense. He's a legend and one of the single most respected men in the sport of American Football. The image of the shadowy figure in a fedora will be burned into the memory of every single Cowboys fan but perhaps any fan of football; period. Tom Landry will forever be known as "America's Coach."

Jim Scott: It's hard to calculate the effect Tom Landry had on me. He was the epitome of class, knowledge, self-control, and leadership to a young cowboy fan. I remember being shocked the first time I saw him wear a hat that wasn't gray. His calm was a thing of legend, but rarely is it mentioned how comforting it was, even beyond the game. Nothing could be that wrong with the world if a man could be so still in the midst of it. But the funny thing is, for all his famous composure, he never struck me as cold, and the enduring image I have of him is a smile as he waves on a bright day in what must have been Thousand Oaks, California.

Danny Phantom: I didn't really know much about Landry the coach, other than he innovated the game and he made the Cowboys a great football team. The most prominent thing about Landry for me, was his poise. With so much craziness that followed America's Team throughout the years, you'd expect him to have moments where he'd get rattled. That never happened. It really speaks to his ability to take whatever life gives him and react as if it's exactly what he expected to happen. He just seemed to be above it all.
Landry had such a kind spirit. The fact that he was always respectful and didn't use foul language made me admire him even more. He was a man of strong faith and that's a big thing for me. He was always true to his character and it just so happened that his character was just truly remarkable.
You know, when people ask you if you could step outside your body and be anyone else in this world, I would probably pick Tony Romo because his wife is smoking hot and I'd be making millions to play quarterback for the Cowboys. But if my dad could be anyone else, I sure hope he'd choose to be Tom Landry.

How about you, BTBers? What did Landry mean to you? What are your earliest impressions of the Man in the Fedora? Hit the comments section and share your thoughts...after you pour yourself a cold one to celebrate his richly-deserved Midsummer Madness win.