Hardy’s Work Ethic, Enthusiasm Setting The Tone For Cowboys Defense | David Helman, Dallas Cowboys
When Hardy joked with reporters that "I don’t get hurt," after straining his ribs on Thursday, he wasn't kidding: he was practicing as fiercely as he's ever been. hardy has not talked at length to reporters, so here are Rod Marinelli and Randy Gregory talking about Hardy:

"Everything he does is full-speed. He practices at game speed every second," said defensive coordinator Rod Marinelli. "We did a solid job of that last year, getting guys playing really hard. It just keeps elevating when you have guys like that, that really want to play hard."

"In my honest opinion, probably the hardest worker, as far as the D-Linemen. He pushes all of us," Gregory said. "He’s obviously had a lot of success already. You can tell he’s trying to set the bar high."

Greg Hardy participates in all drills | Brandon George, Dallas Morning News
Hardy was a full participant in all drills Friday after straining his ribs on Thursday.

Hardy moved well and never seemed to be bothered by his strained left side that slowed him at times toward the end of Thursday’s practice. Hardy looked really strong as he hit the tackling sled in drills and knocked around inflated tackling dummies.

Redskins fan trying to taunt Giants fans flew a banner over their training camp that read, "You got Eli"

Cowboys 2015 Training Camp Practice Summary: Laying The Foundation, Stone By Stone - Rabblerousr, Blogging The Boys
Rabblerousr focuses his first, briefer camp summary on the defensive positions, giving us a heads up on what happened along the defensive line, how the linebackers are holding up, and what the secondary is doing.

A Lesson With Professor Marinelli - CowboysCamp Day 2 - Rafael Vela, CowboysNation
Vela focuses his camp summary on Rod Marinelli and how he teaches his charges.

Jason Witten unafraid: Dallas Cowboys' goal is championship - Todd Archer, ESPN Dallas
Witten is not one to pussyfoot around a topic.

"It's the championship, yeah," he said. "Winning the Super Bowl, right? There's 31 other teams that have the same goal, too. I'm not afraid to say it, but it's silly to talk about it. Everybody has the same expectations but it would be foolish for me being a 13-year veteran talking about playing in the Super Bowl. It's about building your team, being the best player you can be right now in camp, but I don't want to go as if we're just trying to make the playoffs. We know what our ultimate goal is.

"We just choose to focus on other teams that allow us to get there. But that's line one -- build your team to be able to compete for those situations to play in that game. If it's not, you need to leave now. It's pretty simple from that standpoint."

Bob Sturm: Guys like Tony Romo don’t exist; he is a ‘miracle’ | Dallas Morning News
As Cowboys fans, we sometimes take Tony Romo for granted and think any old undrafted QB can become a NFL superstar. Not so fast, says Bob Sturm in a recent Q&Q.

Question: Dustin Vaughn reminds me of Romo. Do you see the same, or naw?

Bob Sturm: I don’t, but it is early. Maybe this camp he will find the next level. But, remember, Romo is a miracle. You don’t find starting QBs in the NFL who are worth anything as undrafted free agents. They don’t exist.

"And for her to share that idea that we’re not going to let other people outside us define us, we’re going to define ourselves by what we do and what we say and don’t say and how we present ourselves each and every day, that’s a message that we’ve shared with our team and it’s something I think is really important in life for individual people and certainly good for football players, coaches and a football team."

"He got straight to the point,’’ rookie defensive end Randy Gregory said. "It was about communication."

"The analogy was they gave a signal to bomb the front and obviously they didn’t and everyone went in and got killed. The moral of the story is we’ve got to communicate or else.’’

Healthy Again, Claiborne Simplifies Goals To "Trying To Make The Team" | Nick Eatman, Dallas Cowboys
First-round pedigree or not, Claiborne is not taking anything for granted this year.

"I’m trying to make the team. That’s how I look at this whole thing," said Claiborne, who missed all of the offseason dealing with torn patella injury, the latest of injury setbacks that have plagued him the past three seasons.

So what exactly does Claiborne want to show to the Cowboys?

"That I can play football, period, point blank," he said, also admitting this mentality is somewhat new. "It’s probably even more this year. I didn’t really feel that way my first year here, I felt like I was done doing everything (to get better). But a couple of injuries have knocked me back a little bit. That’s my mindset now."

The guys at the DMN did a great job of rounding up some noteworthy quotes coming out of Cowboys camp Friday. Here are two of my favorites, go read the rest yourself.

Randy Gregory on whether Rod Marinelli has a soft side: "If he does, I haven't seen it yet."

Jason Witten on RB Joseph Randle: "He’s learning to keep his mouth shut and go in there and play."

Peter King says a final goodbye to any type of journalistic integrity. 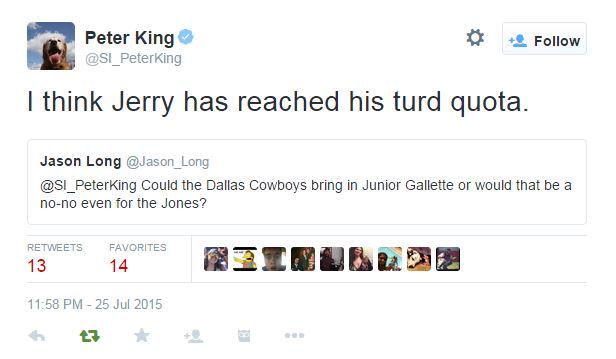 RICHMOND, Va.-Galette, for 1 yr and the minimum, a no-brainer. Really smart by GM Scot McCloughan. If Galette stays in line, excellent add.

Are the Dallas Cowboys better or worse in 2015? | Comcast SportsNet Philadelphia
The 700th level may not be the place you usually go for a balanced analysis of the Dallas Cowboys, but that's exactly what you get from this article by Andrew Kulp.

I simply don’t believe the loss of one running back in this day and age is enough to set a franchise off course, especially not one that’s made all of the improvements Dallas has. Let’s go down the list: franchise quarterback, check; game-breaking wide receiver, check; star-studded and deep offensive line, check; defense with Pro Bowl-caliber talent at all three levels, check, check and check. Add in their impressive draft, and there’s little not to like about the Cowboys, other than the fact that they are the Cowboys.

Hate to say it here of all places, but this team looks like a contender to me. At worst, I think they got measurably better.

The NFL’s All-Bad-Contracts Team - Bill Barnwell, Grantland
Barnwell takes a look at the worst contracts across the league and assembles a 22-man All-Bad-Contract team, which is particularly notable for not featuring a single Cowboys player.

Interestingly though, three former Cowboys make the list: DeMarco Murray, Jermey Parnell, and Jason Hatcher. Apart from the Cowboys, every NFC East team makes the list at least twice. The Eagles have three players, the Giants have two, and the Redskins also have two.

Junior Galette: "I’m just thankful to be with such a functional organization."