NFL's Best And Worst Road Draws: Cowboys Are A Top Road Draw in 2015

Share All sharing options for: NFL's Best And Worst Road Draws: Cowboys Are A Top Road Draw in 2015

The Dallas Cowboys are not media darlings, they're not particularly en vogue with the smoothie-slurping hipster crowd, they've won just two playoff games in the last 18 years, and they probably have more NFL fans rooting against them than any other NFL team. But when the Cowboys come to town, people can’t resist putting their money down to see them. Regardless of whether they are putting up 12-4 or 8-8 seasons, the Cowboys are one of the top road draws in the league.

SeatGeek provided information to CBSSports about which NFL teams are the best and worst road draws of the 2015 season, and their data shows that the Cowboys are the fourth biggest road draw in the NFL, increasing ticket prices by an average of 41% as the road opponent, which ranks them just ahead of the Broncos and behind the Packers (57%), Steelers (53%), and Patriots (45%).

Meanwhile, the Jaguars are the worst road draw in the league, decreasing ticket prices by -24% as the visiting team. The Buccaneers (-20%) and Browns (-19%) follow as the least sought after road opponents. Here's the full list: 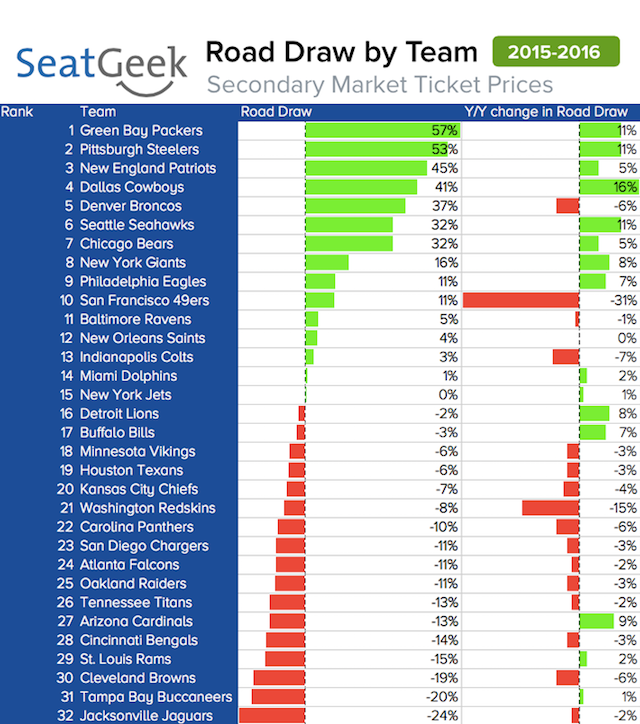 One interesting aspect about this data is that the Cowboys' performance in 2014 seems to have impacted their attractiveness as a road draw, as SeatGeek shows a 16% increase in the road ticket prices for the Cowboys, the highest of any team in the NFL. Overall though, the Cowboys have consistently ranked in the top five, despite their previous 8-8 finishes. In 2013, they were ranked second overall by VividSeats, another secondary ticket marketplace, and in 2014 they were ranked fifth overall.

Here's what SeatGeek have to write about the Cowboys:

At AT&T Stadium tickets are not much cheaper. With a median price of $222 the Cowboys currently have the fifth most expensive home tickets in the NFL. The most anticipated matchup is against the Patriots, when the median resale price is $322. This is a 45 percent jump from the typical Cowboys ticket.

Obviously, we need to keep in mind that the data here is from the secondary ticket market, and many games are sold out weeks or even months in advance. As such, the secondary ticket prices necessarily reflect the supply and demand on the market, but do not reflect the pricing policy of NFL teams. Also, fees for parking, suites, and luxury boxes have been excluded from the data.

At the end of the day, what we're left with is the certainty that much to the chagrin of many a talking head, the Cowboys remain one of the most popular teams in the league. And that's confirmed week after week by fans who fork over their hard-earned cash to see the Dallas Cowboys, perhaps because they like them, perhaps because they hate them, but never because they're indifferent to them.