In today’s practice, the Cowboys opened up the goal line and short yardage chapters of the playbook, which resulted in the edgiest, most physical day of camp.

As has been the case for the last week or so, the Cowboys began Saturday's work with a special teams period that focused on kickoff return. Last week, I noted the players manning the "starting" slots on the various teams units. The kick return unit has changed slightly since the last time I shared the roster; it now looks like this:

The reason it looks different has nothing to do with roster movement and everything to do with injury. With Terrell McClain sidelined, Ken Bishop has taken his place at the "bottom of the diamond," and J.J. Wilcox, the second team kick returner, has assumed the first-team mantle due to Lance Dunbar's foot injury. If these changes are in fact due to injury, then it looks like nothing has changed from the kick team lineup that debuted in the third practice.

Watching Bisaccia work, I was reminded of what may be the Cowboys' most important offseason moves: the rehiring of the vast majority of their coaching staff, particularly the three coordinators.  Bringing these men and head coach Jason Garrett back into the fold in 2015 guarantees that the Cowboys will have the same head coach and three coordinators in consecutive seasons for the first time since the 2003-04 seasons, when Bill Parcells was the head coach.

If we can conceive of training camp as "Football University," then the various coordinators are professors who are responsible for communicating a body of knowledge to their pupils, the players. Like most professors, they like to operate according to familiar syllabi. When a team hires a new coordinator, he brings a new set of priorities and, with them, a new set of lessons for his students.  Like a college major, football lessons come in lower-division and upper-division models; when a team hires a new coordinator, they players must start at the 100 level, with basic, global material before they can move on to upper-division work.

Because the Cowboys' front office has retained the same head coach and coordinators for two years running, many of the Cowboys players - and certainly the ones who are most likely to play the most snaps in 2015 - have already absorbed these global lessons. This is not to say that the team will not return to them during camp - Jason Garrett emphasized that the team will start at "square one" - but rather that that the syllabus features familiar material. As a result, the players  who were in Oxnard last year can quickly re-familiarize themselves with these global considerations and then concentrate on detailed, upper-division material: hand placement, footwork, exact spacing.

The returning core special teamers - James Hanna, Kyle Wilber, J.J. Wilcox, Anthony Hitchens, Jeff Heath - all dutifully absorbed Rich Bisaccia's teachings in 2014 (and all save Hitchens, in 2013 as well). Furthermore, another core guy worked with Bisaccia in 2013 before departing for Chicago last offseason. Here, in 2015, he and the other core teams guys are intimately familiar with the way the Cowboys' special teams coach wants them to execute each aspect of, say, proper spacing on kickoff returns or the timing of the release on punt returns.  As he leads the players though the various aspects of these lessons these next couple of weeks, they will be re-visiting familiar material. In a sense, they are taking a class that they have already aced.

After the special teams period, the team launched into the day's first 11-on-11 session, which I watched attentively, since it was likely to reveal what they would be working on during this phase of camp. This proved to be the case; although the offense came out passing, almost every route was a short, quick-hitter. This told me that the next chapter from the playbook we'd be seeing will be goal line and short yardage. Indeed, the later position group work focused on power runs, short patterns, and play action - all staples of the short yardage package.

After the full team walk-through and the standard warm-up sequence (punctuated by a "screen period") during which we saw a series of wide receiver tunnel screens - precisely the kind of play that succeeds in situations when the defense is bunched inside, or close to the line of scrimmage - your Beloved 'Boys broke into position groups and worked with their respective coaches on the skills specific to short yardage work. The receivers revisited quick cutting drills, practicing the quick cuts they would need in the short passing game by running around cones, upside-down garbage cans and hula hoops: 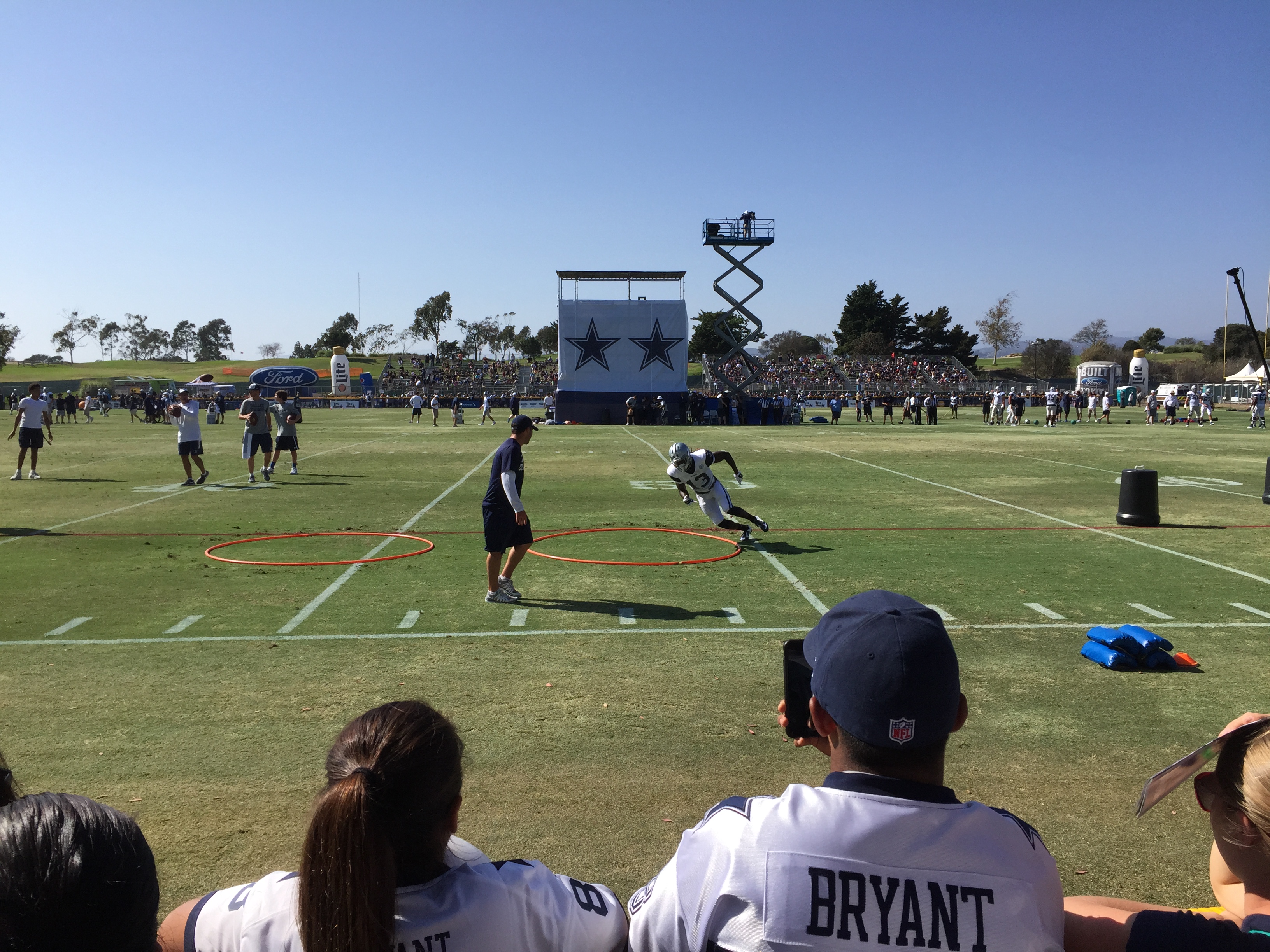 Meanwhile, the offensive line and tight ends practiced trap blocks and blocking down in front of a pulling guard; the running backs and quarterbacks polished their timing on handoffs.

Next the receivers and tight ends joined forces to work on short combo patterns, working one side of the field at a time. Although there were no defenders, per se, Scott Linehan and his team aligned assistants in various "zones," in order for the receivers to get a clearer understanding of spacing. Typically, one receiver would go "deep" and the other would run a shallow route, as a way of stretching what little depth the defense still had to defend. Later, when the offense went to three receivers on a side, their routes typically triangulated, with two deep and one shallow or vice versa. Again, the point was to stress a zone defense by forcing it to cover as much territory as possible.

Soon thereafter, the work we had seen the various position groups do was put into action in the afternoon's first competitive period. Running back Gus Johnson, quarterback Dustin Vaughan, and tight end Geoff Swaim joined the offensive line to work on the blocks they had just practiced against Rod Marinelli's defensive line. As I noted in my practice summary, the O-line got the better of the D-line all day; their dominance began here, as they opened some nice running lanes for Johnson. Here, the third team creates a nice hole (look at John Wetzel drive Lavar Edwards to the outside): 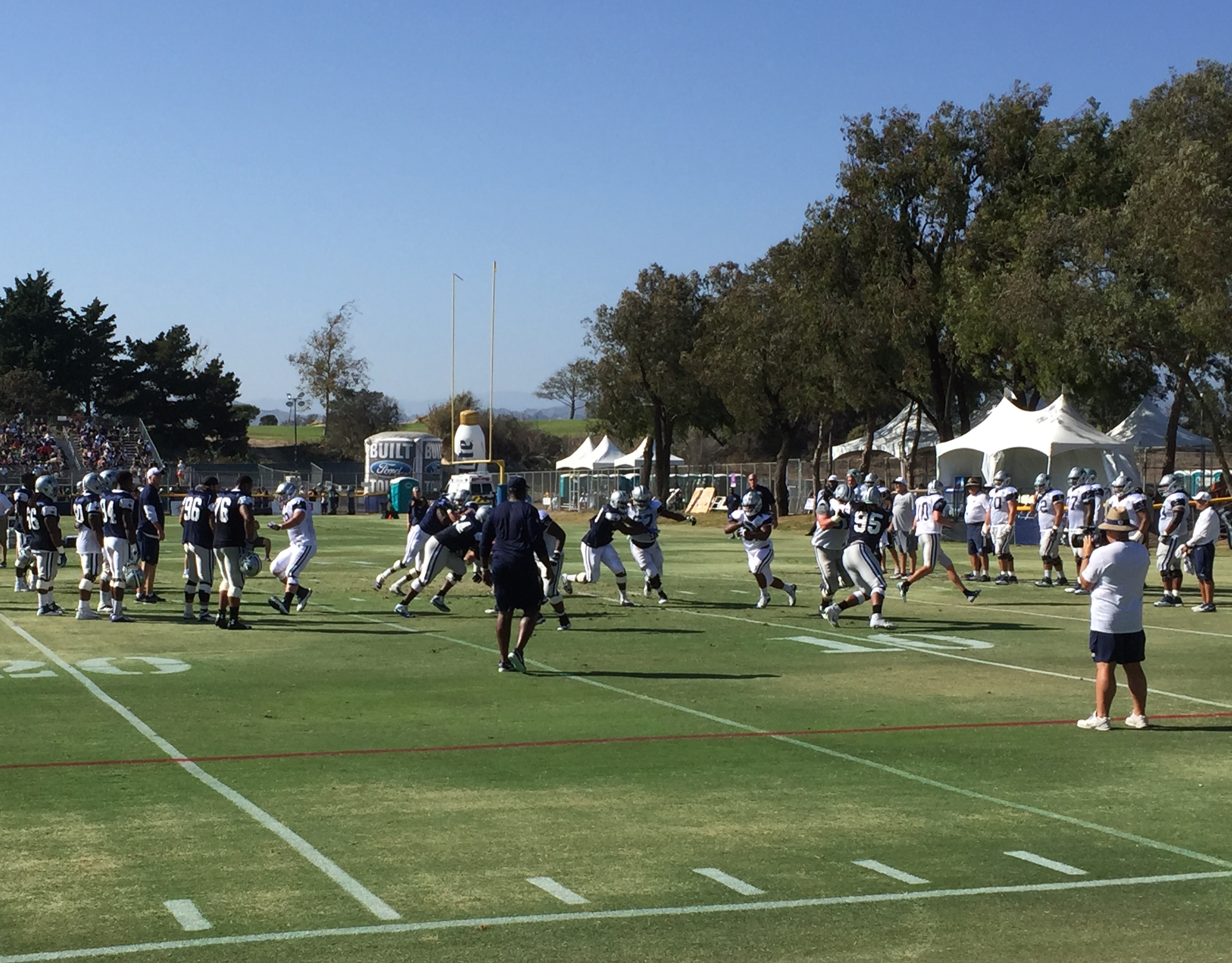 At the other end of the near field, they moved the ball inside the five yard line and receivers faced off against corners, running the short patters they had just drilled. This work was carried over to the first "best-on-best" session, which the offense won handily. The keenest example was Tyler Patmon wrestling Cole Beasley to the ground, drawing a flag, only to have Beasley jump up and catch the pass for what would have been a walk-in touchdown.

The first segment of the ensuing full team period was goal line. As I mentioned in my practice summary, the offense dominated, scoring on seven of eight total snaps. The first teamers were a perfect 4-4 on goal line plays, opening wide lanes for backs to run in and moving in perfect concert on a play action pass that Tyler Clutts took in for a score as the defense swarmed to corral the running back. Here Johnson easily gets the edge on an outside run: 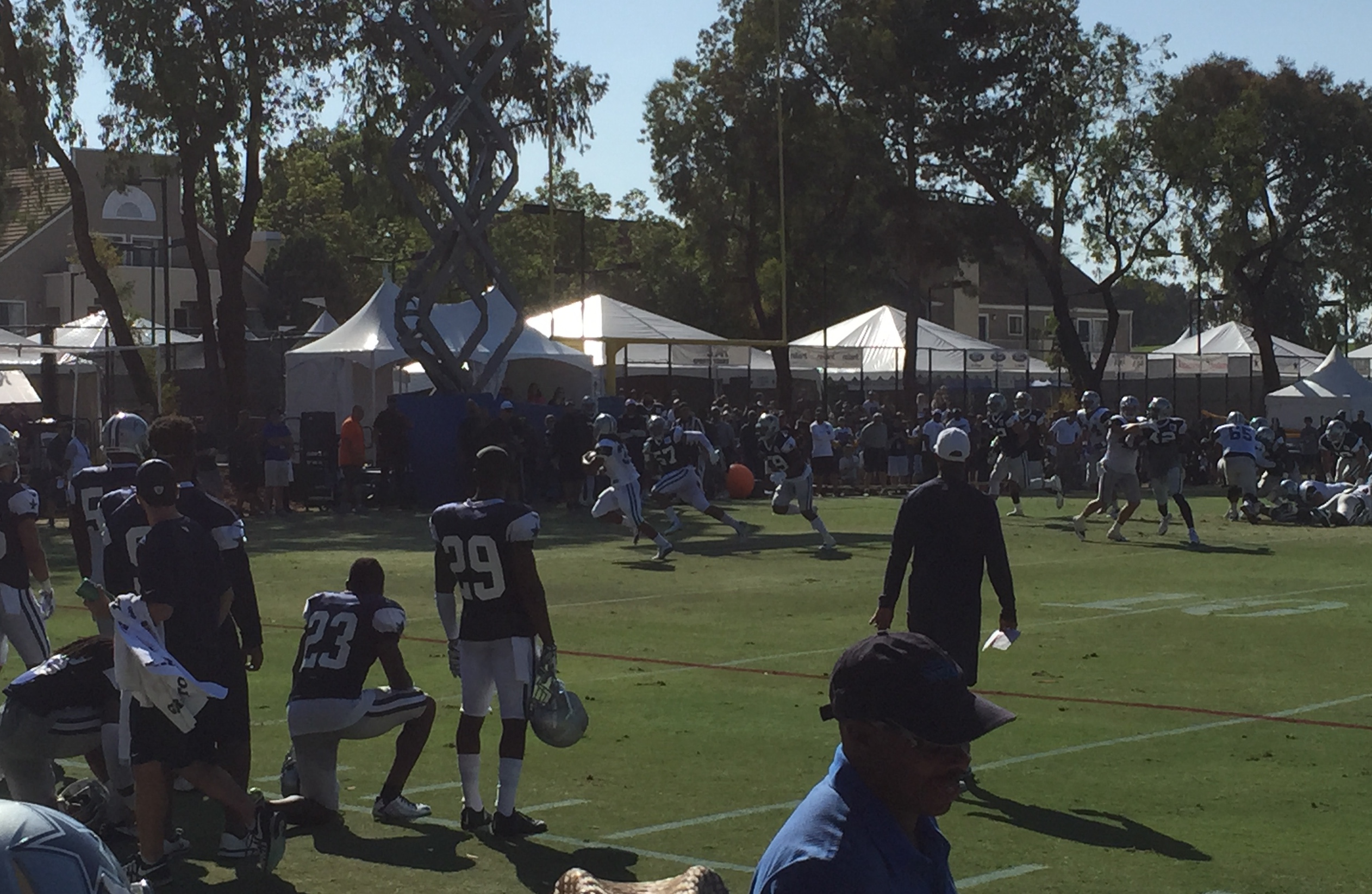 The second team fared almost as well, scoring on three of their four shots. As might be expected, a distressed defense and less-than-pleased coaching staff expressed their discontent rather audibly during and after the beat-down.

J.J. Wilcox on goal line drill: "It was fun. Even though we got whooped. That's a pill we got to swallow. Go watch film and grow from it."

This was followed by work on short yardage material, at about midfield. Much of what we saw closely resembled the goal line package (during game weeks, teams lump these together into the same day's preparation, usually working on them on Fridays): a preponderance of runs, plenty of 22 personnel, quick-hitters to wideouts. My favorite play was a perfectly executed Romo rollout right, after play-action, that concluded in a completion to Witten.

This finished, we were treated to the second special teams period, which began with field goal work (Dan Bailey, to everyone's surprise, missed a field goal, for only the second time in camp) and then moved on to punt return work. That served largely as a respite from the salty, physical style of play that characterized the rest of the day's action. In OL-DL pass rush drills, Tyrone Crawford and Travis Frederick shared a tense moment when Crawford got a bit mouthy after he and Ryan Russell beat Frederick and Zack Martin in two-on-two work. On the next snap, Frederick stalemated Crawford, and the two men engaged in a protracted stare-off.

In the seven-on-seven session, Jeff Heath timed his jump perfectly, stepping in front of Nick Harwell to pick off a Brandon Weeden pass, much to the delight of his otherwise chagrined defensive teammates. Had it been in a game, it would almost certainly have resulted in a touchdown. Soon thereafter, Weeden arced a long pass to Deontay Greenberry down the right sideline. Greenberry, who has the most NFL-ready body of any of the down-roster receivers, failed to use his body to wall off the defender form the ball, as Terrance Williams had done beautifully earlier in the week on a similar pattern. As a result, the defender was able to impact the reception and the ball bounced away. Despite his physical advantages, Greenberry's lack of body control puts him behind smaller receivers such as Harwell, Reggie Dunn and Lucky Whitehead.

The second best-on-best session featured pass rush match-ups. Ronald Leary used his impressive power to stonewall Davon Coleman; Travis Frederick battled Ken Bishop to a stop; and Jack Crawford was able to use a nice blend of power and quicks to get past La'el Collins. Collins is an interesting case. After selecting offensive linemen in recent years who have been designated as immediate starters, the expectation in early May was that Collins, a consensus first-rounder, would join them. Although I realize that this is unfair, the fact that he hasn't feels somehow disappointing...

Next up was the final 11-on-11 session of the day. On the first play of the period, Joseph Randle took a handoff to the right side and found a gaping hole created by Travis Frederick and Tyler Clutts, among others. Randle wasn’t touched by a defender until J.J. Wilcox caught him 20 yards downfield. It was an electrifying run that got the crowd hyped; they were whipped into a frenzy by what ensued: Wilcox and Kyle Wilber hauled Randle to the ground - a bit too roughly for Clutts' taste, as he gave Wilber a little shove - a move that precipitated a shoving match in which both sidelines streamed onto the field. I was struck by the image of a helmetless Jeff Heath running toward Clutts the moment the shoving started. Although no punches were thrown, the scuffle spoke to the intensity with which the practice was conducted.

And, finally, this: yesterday's storyline was that Cole Beasley couldn't be covered. Well, he still can't. In the situational portion of the final team period, a hurry-up situation, he dropped a pass, then proceeded to make two other plays wherein he caught the ball underneath and turned upfield for big gains. Because nobody could catch him; he's simply too quick. In the second and third images, notice how he gets the edge on Byron Jones: 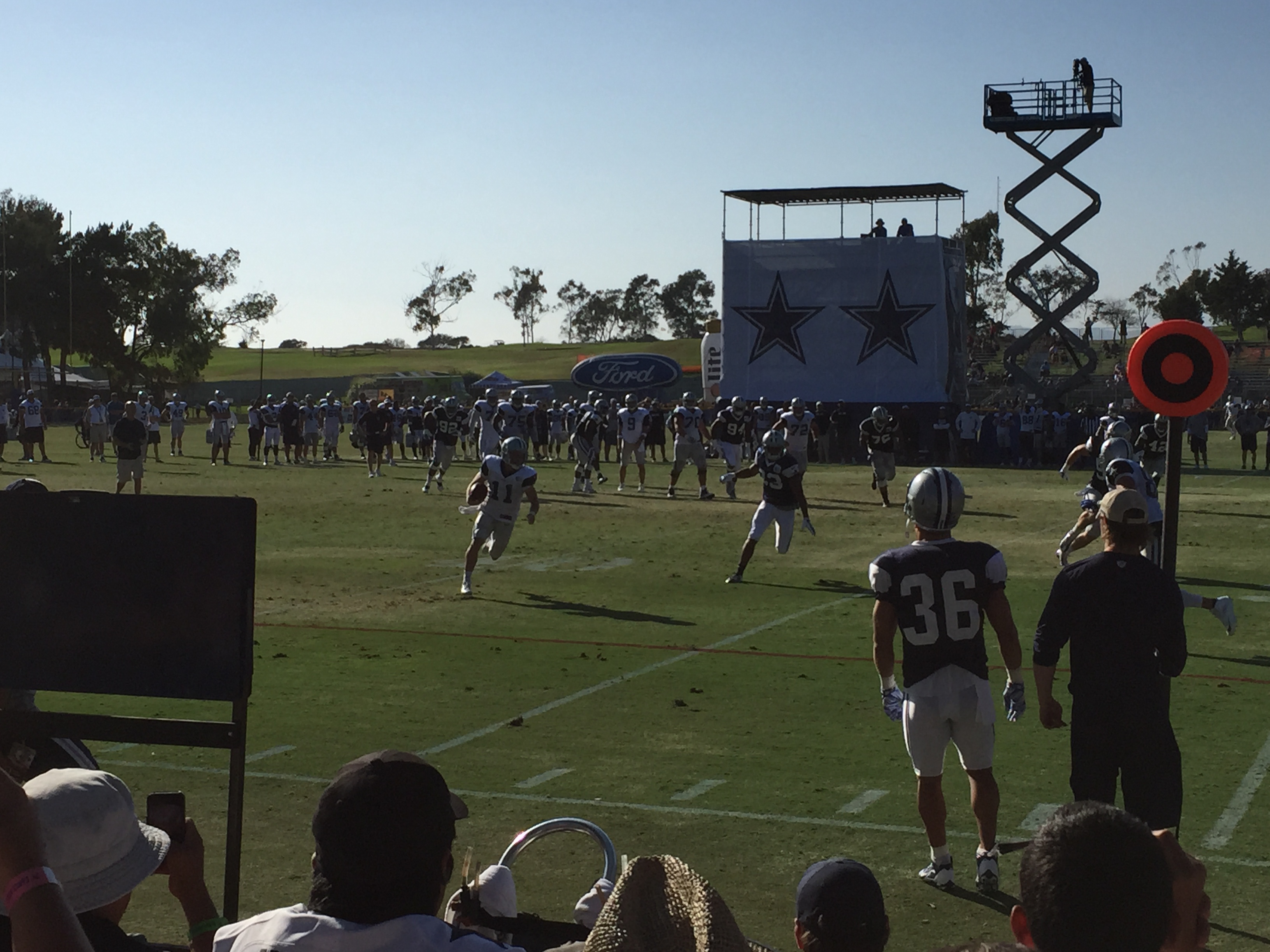 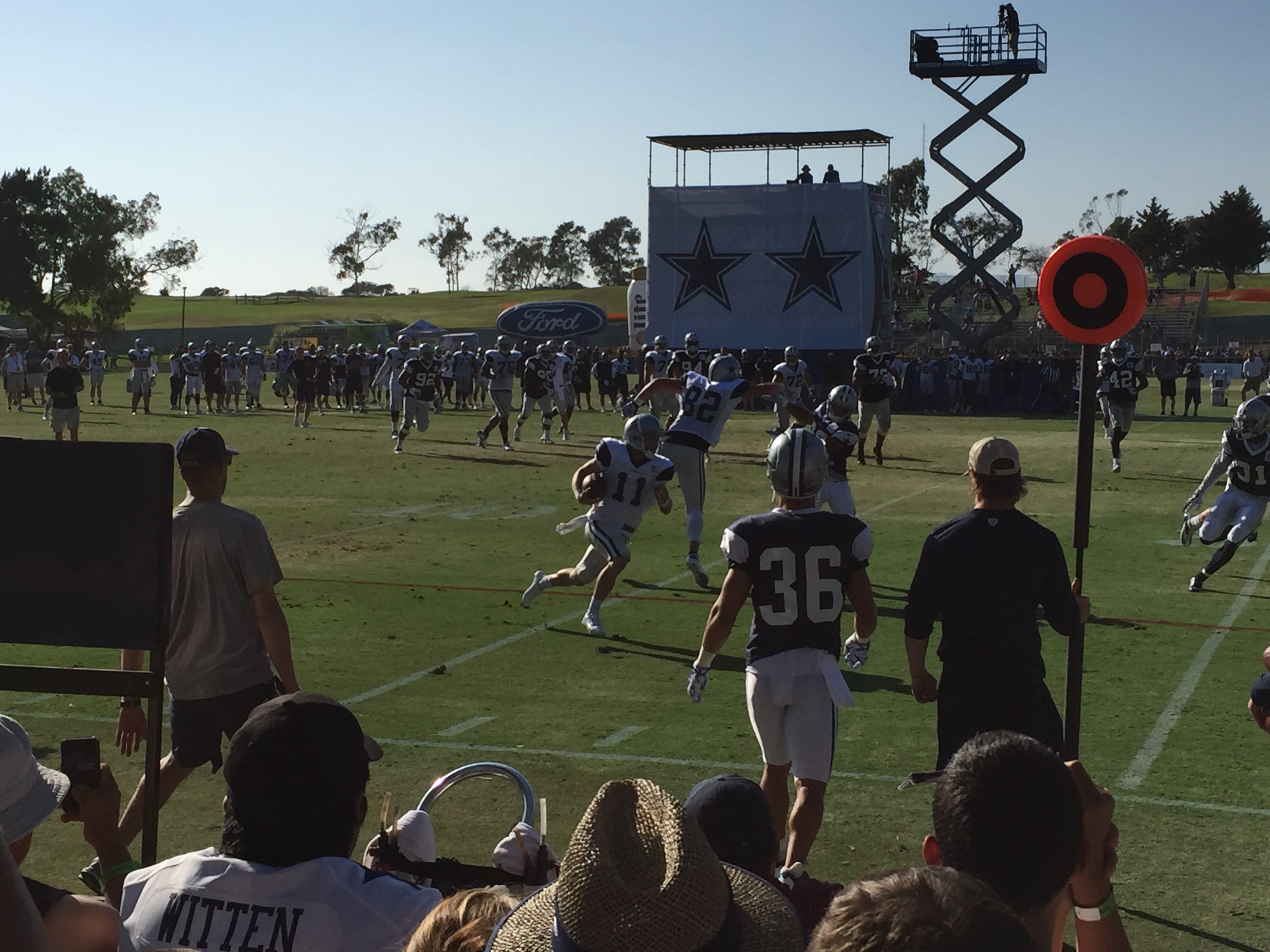 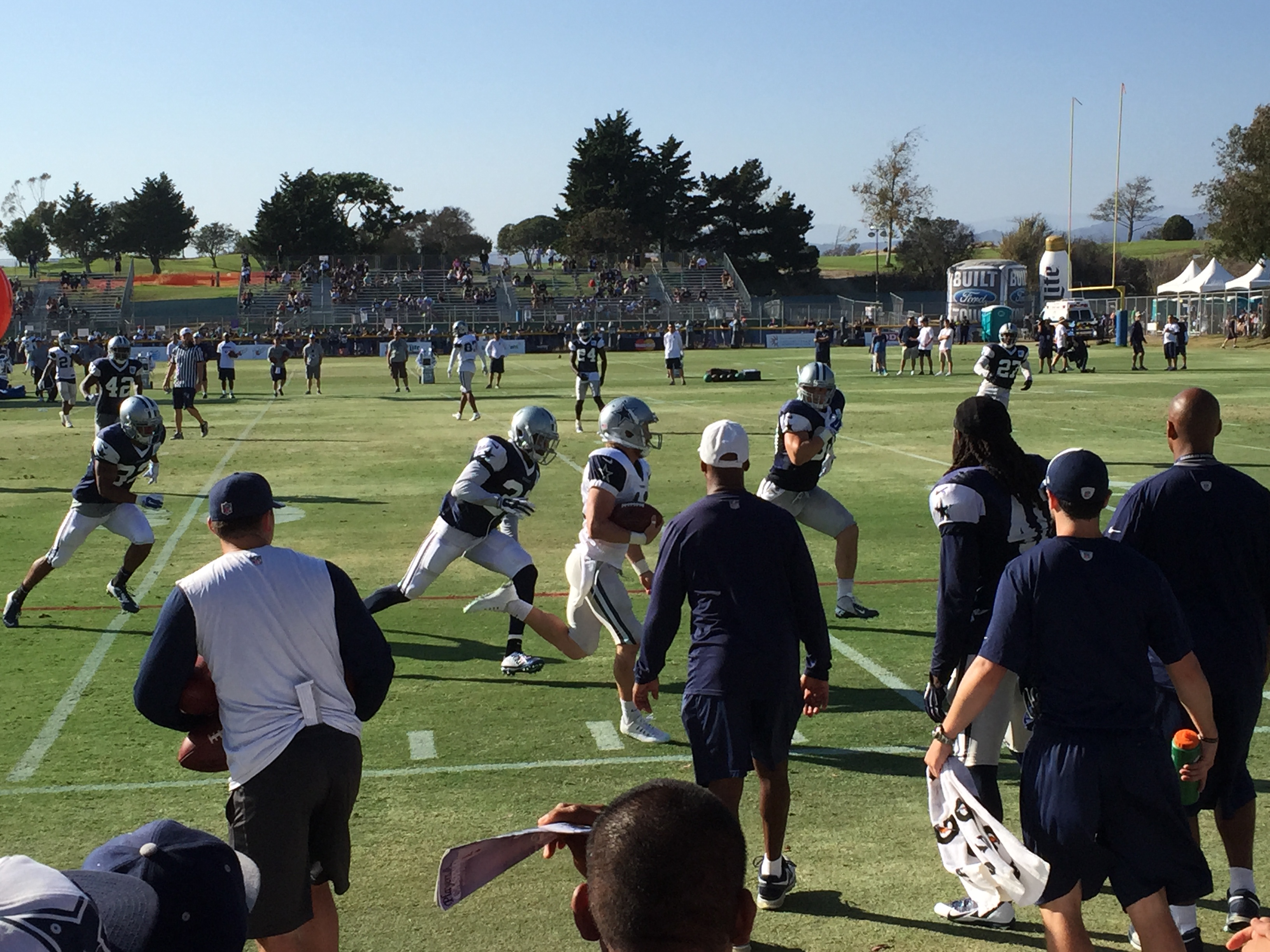 After Beasley's two big plays, the first unit's situational drive bogged down and they were forced to attempt a field goal - one of the defense's few victories on the afternoon. They'll get another opportunity on Sunday, during the much-ballyhooed Blue-White Scrimmage. Of course, Ol' Rabble will be there, in the front row, bringing you all the details.