Can the Cowboys extend their winning streak against the Giants to five games?

The Cowboys host the Giants on Sunday in the season opener, and are looking to make it five straight wins against the Giants. If previous season openers are anything to go by, this game should end with a Cowboys win, as KD Drummond explained in a post in April.

Cowboys have won four straight against G-Men, and will try to enhance their 7-0 record against the Giants in season openers, dating back to 1965.

But divisional games have a way of taking on a life of their own, so pre-game predictions may not mean all that much. Whether or not the experts have a good feel for what will happen on Sunday remains to be seen, but here's what those experts are predicting for the game:

Not everybody provides commentary with their pick. Here are a few pick'em panels who don't offer any sound bites, but who do offer a take on who the favorite is for Sunday night.

And even the fans don't leave much of a doubt about who the favorite is in this game: 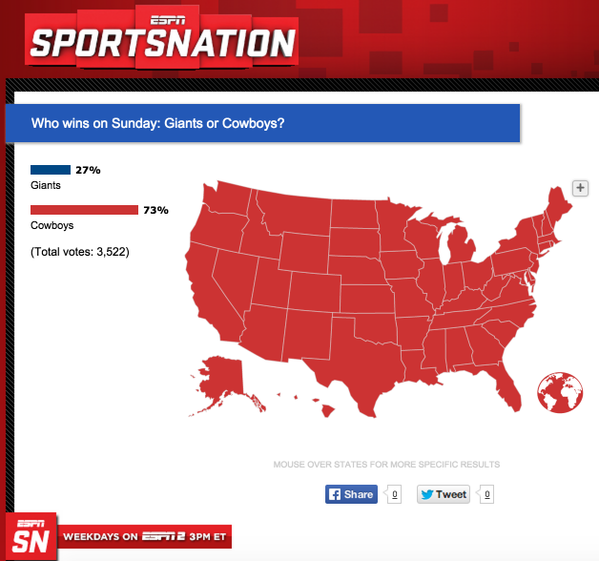 The Cowboys are 6-point favorites at home over the Giants, but NFL games - and divisional games in particular - are not played in Vegas and can often go in an entirely different direction than one would have expected. And with this being the season opener, almost anything is possible on Sunday night.

What's your expectation for the game?

Get your picks in for the BTB Pick 256 Challenge!

Pick 256 is a season-long contest in which BTB members and readers get to pick the straight-up winners for all games each week. We have 460 entries for kickoff weekend so far, and only four of the entries picked the Giants to win.

Because we were a little late with the kickoff post this week, you have until kickoff on Sunday at 1 pm EST to submit your picks (and you'll get a freebie for tonight's Steelers/Patriots game). But why wait until the last minute? If you haven't yet submitted your picks, now would be a good time. Here's the link to the entry form.

If the link above doesn't work for whatever reason, use the following alternative, which does not autopopulate your BTB user name into the entry form.