Cowboys News & Notes: Running Back Not A High Priority In 2016?

Share All sharing options for: Cowboys News & Notes: Running Back Not A High Priority In 2016?

No need to draft a RB high - Babe Laufenberg, SportsDay
In a chat with fans, Laufenberg was asked why a RB wasn't a consideration for the Cowboys' fourth overall pick. Laufenberg explains.

RB is a position where you don't need to use a top of the draft pick to get productivity. But you have to throw some numbers at the position. Maybe you use both your 3rd and 5th rounder on RBs. Add that to McFadden, and a (hopefully) healthy Lance Dunbar, and you have some options.

Twitter mailbag: Cowboys unlikely to make major investment in free agent running backs - Todd Archer, ESPN
You can't go on social media or anywhere on the interwebs these days without happening on folks pining and whining for the Cowboys to sell the farm for whoever they think is the best free agent running back.

In response to a Twitter question on the subject, Archer explains why the likes of Chris Ivory, Doug Martin, or Lamar Miller will not wear a Cowboys uniform next year.

I think the Cowboys answered this question when they passed on the chance to keep DeMarco Murray. You’re asking about Chris Ivory and Doug Martin. Others have mentioned Lamar Miller. I don’t see the Cowboys making major free-agent investments in a runner.

They knew all about Murray and said no. I don’t view any of those backs mentioned as better fits than Murray. Maybe Martin, but there is a good chance he will not be available when the market opens. Taking a chance on a guy they don’t know isn’t worth it. Now, if the contract is right, then fine, do it.

But I’d look to the draft and pair that guy with McFadden with the idea he becomes the every-down back eventually in 2016 and definitely in 2017.

Cowboys go into offseason with healthy salary-cap situation - Todd Archer, ESPN
Unlike previous years, the Dallas Cowboys have done a good job of creating cap room. With a few moves, they can create even more, Archer explains, but they may not need to.

Spending big in free agency has hardly proven to be worth it to the Cowboys or other teams. Owner and general manager Jerry Jones knows that. Remember this quote from the NFL scouting combine last year?

"Overpaying free-agent wise has not borne out," Jones said at the time. "Not just for us, but around the league in general. When you go out and overpay in free agency, those usually don’t have good endings."

Dallas Cowboys want to keep coaching staff together for next season - Charean Williams, The Star-Telegram
Looks like all the talk about Jerome Henderson moving on were a bit premature. Williams writes that the Cowboys are working on a deal to re-sign Henderson, along with the rest of their coaches.

Executive vice president Stephen Jones said "our goal is to get them all signed back up."

Free Agency Preview: Rolando McClain's Future Is A Big Question For 2016 - Bryan Broaddus, DallasCowboys.com
The Cowboys will probably keep us guessing for quite a while about McClain's status. Last year, they signed him to a contract on April 2, almost a month after the start of free agency. And we could see a repeat of that, based on what Broaddus forecasts about McClain's future in Dallas.

The decision to re-sign him will come down to whether the front office and coaching staff can live with the lack of consistency in his game. There will always be a questions of his reliability and stability. You’d like to believe that, with the support group the Cowboys have in place, you could live with these issues -- but even with that, the job might be too tough.

Dallas Cowboys' OL strong but has room to grow - Todd Archer, ESPN
The Cowboys still boast a ton of talent along the offensive line, and though it wasn't quite as good as 2014, the pieces are all in place. So forget about the Cowboys drafting another offensive lineman high.

Since 2011 the Cowboys have taken Smith, Frederick and Martin in the first round and Green in the third round. Plus they added a first-round talent in Collins. Can they afford to add another high-value resource to the position? It’s possible but unlikely when you look at how a team has to manage its salary cap.

Travis Frederick on grading process for Cowboys linemen - SportsDay Staff
In an interview on KRLD-FM 105.3 The Fan, Travis Frederick spent some time explaining how the Cowboys grade their offensive linemen.

In our room, you can get a double-plus, plus, zero or a minus. A minus means you negatively affected the play. Zero means you had no impact on the play; your guy didn't make the tackle but you didn't really do anything crazy. Plus means you positively impacted the play, you got it moving forward. Double-plus is usually knockdown, outstanding block, pushing a guy out of the camera angle. You get one of those for every play. You can also get mental errors; you've gone to the wrong guy, or you didn't communicate your assignment.

In brokering LA deal, Jerry Jones shows he is the Tom Brady of NFL owners - Rick Gosselin, SportsDay
Gosselin with a very readable background piece on the role Jerry Jones plays in the NFL, and his part in getting a deal done for Los Angeles.

This was too big a decision, too important a financial decision, for the league to screw up again. That's why Jones stepped in this week to broker the deal that allows the Rams to move back to Los Angeles and gives the Chargers an opportunity to join them.

When the conversation is money, the NFL listens to Jones. He is to NFL financials what Tom Brady is to NFL quarterbacking. And Los Angeles was all about money -- growing the financial pie so that both the players and owners would benefit. So when Jones spoke this week in Houston, everyone listened.

Byron Jones' home should be at safety - Todd Archer, ESPN
The Cowboys moved first-round pick Byron Jones from corner to safety late in the season, and it's a move that's a fit for all parties, Archer argues.

When the Cowboys drafted him in the first round it was initially to play cornerback with the idea he could move to safety. By the end of the season the Cowboys made their decision that Jones’ future is at safety with him starting there the final two games even though cornerback Morris Claiborne was hurt.

Jones was able to show the ability to be a centerfield-type safety, even if he did not record an interception. He also has the ability to play the slot or stick with tight ends.

Byron Jones is PFF's second runner-up for Defensive Rookie of the Year - Gordon McGuinness, Pro Football Focus
Good to see that people outside of Dallas have taken note of Byron Jones' rookie season.

Dallas’ first-round draft pick showed his versatility in 2015, spending time at outside cornerback, in the slot, and at safety in the first year of his career. He was solid against the run, but it was his play in coverage that earned him a spot as a top-three defensive rookie, where he notched six pass breakups over the course of the year.

The Cowboys had the foresight to uncover his versatility, and by the end of the season, Jones had played 249 snaps as an outside corner, 185 as a slot corner, 270 as a free safety, and 186 as a strong safety or extra linebacker in the box. With front offices now salivating for that chess piece player who can move all across the defensive backfield, Jones thrived in his varying role in the Cowboys’ defensive backfield.

Dallas Cowboys Draft Trends Since 2010 - Marcus Mosher, Footbology
Mosher takes a look at position-specific measureables for each Cowboys draft pick and offers an interesting perspective on the discussion about whether the Cowboys need a speedy wide receiver.

In a Jason Garrett-Norv Turner offense, the outside receivers have pretty clear baselines for the measurables. They need to be 6’2. They need to be able to run under a 4.55 in order to stretch the field. And, they need to be able to block at a high level. In a zone-blocking scheme, a receiver who isn’t an above average blocker won’t see the field. It’s why Dallas doesn’t use Cole Beasley more than we would all like. They want to punish the defensive backs in the run game with their big, physical wide-outs.

I understand that a lot of fans want to see a quicker type of receivers opposite of Dez Bryant. I get it. I’ve been one of the biggest supporters in that case. However, we can see that Dallas just doesn’t value the smaller receivers as much. It’s just not what they are looking for. If the Cowboys are looking to draft a receiver in 2016, it’s okay to assume that they will have their eyes toward the bigger receivers, rather than players such as Corey Coleman and Pharaoh Cooper.

Cowboys get most value out of draft picks, Redskins least, study finds - Caitlyn Holroyd, theScore.com
Referencing an extensive study draft value by casino.org, Holroyd points out that the Cowboys have done quite well in the draft historically.

When it comes to finding quality draft picks, they found no one does it better in the NFL on average than the Dallas Cowboys, Minnesota Vikings, and Miami Dolphins. The Washington Redskins find themselves at the bottom of the list with the league's worst draft quality, followed by the St. Louis Rams and Tennessee Titans. 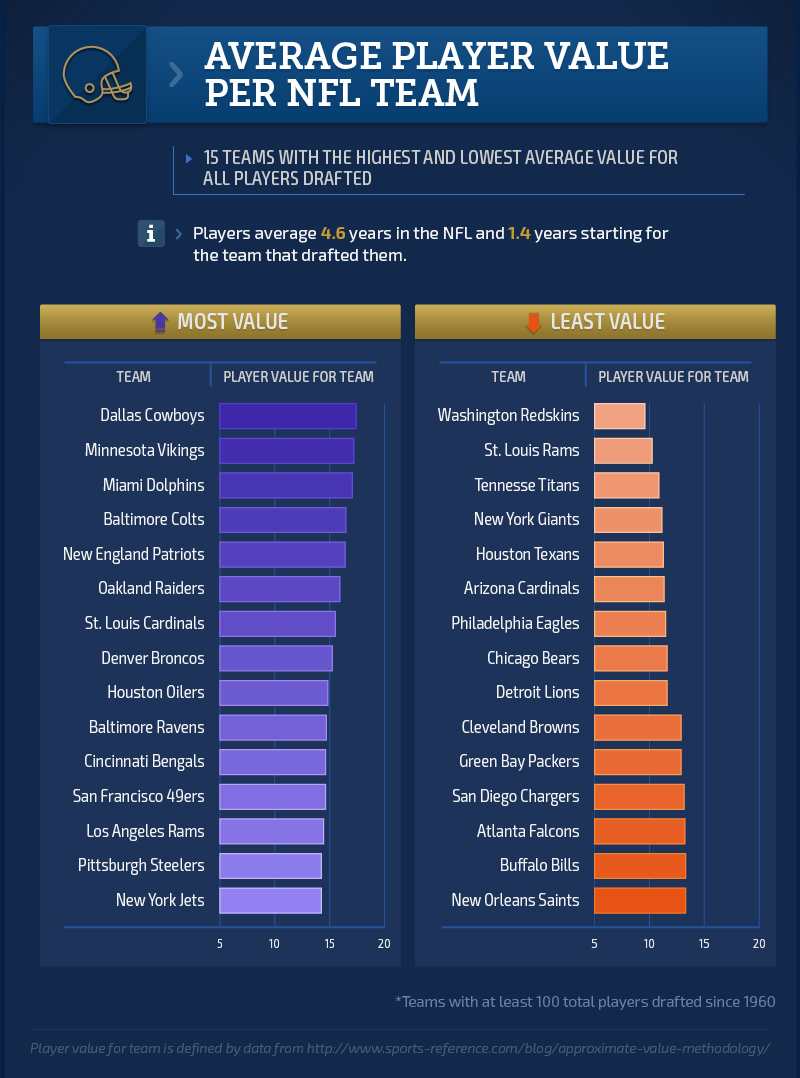 Get your picks in for the Playoff Pick 'Em.

Hookerhome is running a playoff pick 'em challenge in the fanposts. If you want to participate, submit your picks for the weekend action below.

If the link above doesn't work for whatever reason, use the following alternative, which does not autofill your BTB user name into the entry form.