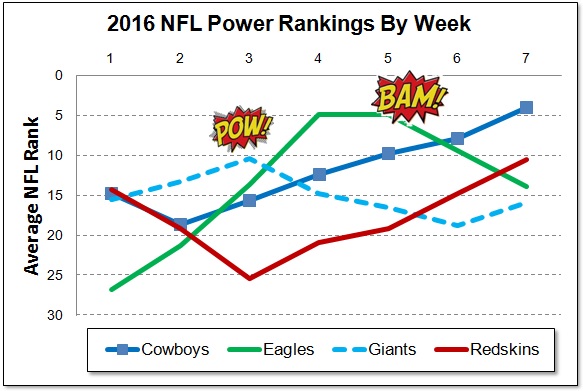 It's been an eventful seven weeks in the NFC East so far, as you can see from the graph above.

It's hard to believe now, but early in the season, the Giants had almost worked their way into the Top 10 of the NFL power rankings after starting the season with two wins. But then they lost three straight, and it looks like they had their annual mid-season meltdown a bit early this year.

The Eagles were the flavor of the day for a few weeks when they stormed out to a 3-0 start that landed them in the top five of our power rankings. But after losing two straight, the straw fire in Philly has burned down already.

The Redskins started the season with two losses, but then put together a string of four wins that see them moving up the rankings on the same trajectory as the Cowboys.

Here's a summary of where the Cowboys are ranked heading into Week 7, and a little further down you can see how that compares to the rest of the NFC East.

All the commenters that hated on their friendly writer for having Dallas in the top 10 two weeks ago are really going to be steaming now. Well, they can take that steam and go iron a Zeke Elliott Offensive Rookie of the Year T-shirt with it.

The Great Wall of Dallas II is rolling.

The Packers had the best run defense in the NFL entering Week 6, but the Cowboys, well, ran them over in Green Bay, putting up 191 rushing yards. Of course, it didn't help the Packers that their stagnant offense wasn't giving the D any rest. But as bad as Aaron Rodgers looked at times, give the Dallas defense props for playing within its scheme -- and playing well. More pass rush is needed. More run game is not. Elliott is on pace to break Eric Dickerson's rookie rushing record of 1,808 yards.

How 'bout them Cowboys?

More like, "How do you stop them Cowboys?" America's Team made mincemeat of the Bengals in Week 5. The Cowboys then made an average quarterback out of Aaron Rodgers in Week 6. If you're not impressed with Dallas' rookie-led offense and swarming defense, you probably don't know football.

If not for a mental blunder by Terrance Williams in Week 1, the Cowboys could easily be undefeated. Nonetheless, they’re 5-1 and have been dominant in three of the past four weeks. The only so-called downside to their season is that they’ll have a near-impossible decision to make in a few weeks when Tony Romo is healthy. It’s not a choice any coach would like to make, but it’s a good problem to have.

There is absolutely, positively no way that the Cowboys should be contemplating a switch to Tony Romo at QB any time soon. Rookie Dak Prescott has been one of the league’s most indispensable players so far this season. He has the Cowboys in the thick of the race for NFC supremacy. It would make no sense to tinker with that winning formula.

84.7: Dak Prescott might have to give way to Tony Romo following the Cowboys' Week 7 bye, but he probably shouldn't if you look at one key stat. Prescott's 84.7 Total QBR this season ranks second-best among all quarterbacks, trailing only Atlanta's Matt Ryan.

America's Team has officially become Dak Prescott's team after the rookie quarterback led Dallas to their fifth consecutive win with an impressive romp over the Packers. Jerry Jones needs to take this bye week and come to his senses: Move forward with Prescott, not Tony Romo.

Side note: Could Ezekiel Elliott pull off the trifecta: Rookie of the Year, MVP and new single-season rushing king? It's not as outlandish as it sounds.

Don't sleep on how well the defense is playing. The secondary has been really good.

The Cowboys are the most fascinating team in the NFL right now because of their quarterback conundrum. Dak Prescott said Monday he won’t let it bother him.

It's kind of amazing that amid all the handwringing over Prescott vs. Romo, Ezekiel Elliott isn't far off the pace for a 2,000-yard season.

The table below summarizes the power rankings for the four NFC East teams.