Share All sharing options for: Cowboys News: Dallas Has 4th-Best Odds To Win The Super Bowl

After The Week 7 Bye Cowboys Could Become Nearly Unbeatable - Jeff Smith, Today's Pigskin
The Cowboys will get back three of their key players against the Philadelphia Eagles in Week 8, but that's not the only reason why Dallas must be considered a serious contender.

Fortunately, anything the Cowboys can add right now is just even scarier for opponents. Their defense ranks No. 7 in the NFL in points per game allowed at 17.8, and may very well be one of the most underrated units in the entire league. On the offensive side of the ball, the Cowboys have averaged 26.5 points per game (No. 8 in the NFL), while shockingly landing at No. 3 in the league in total yards per game (401.5) behind only the Atlanta Falcons and New Orleans Saints.

It’s hard not to love what the Cowboys are building right now, and with the return of a few key players, they’re going to be a tough team to beat down the stretch.

While much of the conversation has been about who the Cowboys’ starting quarterback should be, it may be time to shift the attention more towards the impressive all-around play from this team. Even more importantly, fans may want to seriously start considering the Cowboys as being legitimate Super Bowl contenders.

Dallas Among Championship Favorites With Dak Prescott At Quarterback - Anthony Riccobono, IBTimes.com
The Cowboys have had a little championship dry spell of late, but they currently are among the Super Bowl favorites in the NFC.

The Cowboys haven’t reached the Super Bowl in 21 years when they beat the Pittsburgh Steelers to win their third championship in four seasons. Dallas hasn’t reached the NFC Championship Game since then, winning just three playoff games over the last two decades.

If there was any doubt that the Dallas Cowboys were one of the NFC’s best teams, it was removed with their win on Sunday. Convincingly defeating the Green Bay Packers in Lambeau Field, Dallas looks like a legitimate threat to reach the 2017 Super Bowl.

Through six weeks, only the Minnesota Vikings have a better record than Dallas. The Cowboys sit alone atop the NFC East, and they haven’t lost since the season opener. Heading into their bye in Week 7, Dallas has better Super Bowl odds than all but three teams.

"This kid [Dak Prescott] reminds you of…the old Cowboys when they used to walk in those stadiums, 94-95. Troy Aikman. Emmitt Smith. That crew. You knew what you was going to get," former Baltimore Ravens great Ray Lewis told the crew of the FS1 debate show Undisputed on Wednesday. "When you watch the Dallas Cowboys, it’s a totally different thought process than the way you think about when [Tony] Romo is playing. It’s like ‘Oh, will he mess it up?’ Right? ‘Will he finish it?’ That’s his story right going through the years. This boy Dak gives you a different thought process when you think about the Cowboys."

Comments from Jerry and Linehan to Dak when he was drafted - CowboysZone.com
Our friends over at CowboysZone dug up these quotes from the first call the Cowboys made to Dak Prescott when they drafted him. 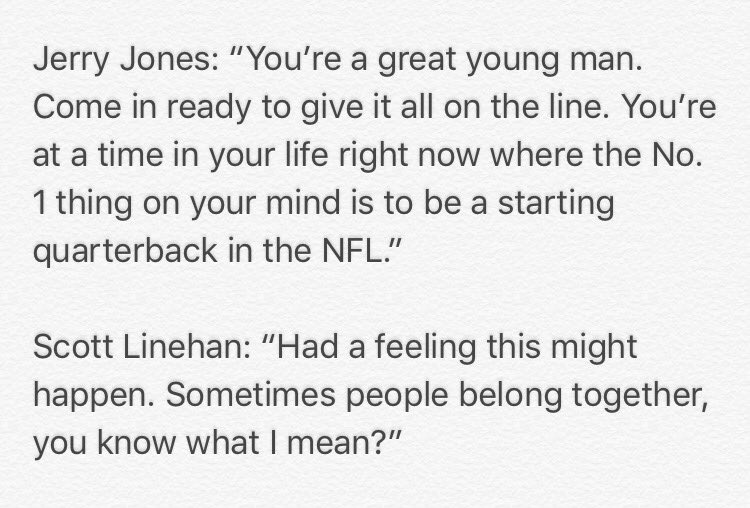 Local paper measures the impact of ‘Dakonomics’ on the Starkville economy - Nick Cole, SEC Country
Dak Prescott is no longer the quarterback for Mississippi State, but that doesn’t mean he isn’t still the most popular man in Starkville.

In fact, according to a report from The Clarion-Ledger’s Michael Bonner, Prescott’s success away from Mississippi State has created a tangible impact on the Starkville community.

The local sporting goods store? They can’t keep the Prescott Cowboys jersey on the shelves, and reportedly received between 30-40 calls per day from fans requesting Prescott jerseys or t-shirts.

The local Buffalo Wild Wings? They are receiving phone calls early in the morning to ensure that patrons will be able to hang out and watch the Cowboys game in what is typically a New Orleans Saints television market, according to Bonner’s report. And they come from all over the state to be a part of the experience.

Here Are The NFL Teams That Play The Highest Draft Picks - Chase Stuart, FiveThirtyEight
Great piece by Stuart in which he calculates the average draft value of each offense and defense in the NFL. The star-studded and draft-pedigreed Cowboys offense surely comes in at the very top of the league, right? See for yourself:

On defense, the Cowboys are ranked 26th, and Stuart suggests that teams who have a high average draft value are no better than the ones that don’t.

In general, there is no correlation between a team’s offensive DVOA and its (snap count-weighted) offensive draft value.

In switch to fullback, Keith Smith feeling some love - Todd Archer, ESPN
The Cowboys' fullback has been flying under the radar a little this year, but the linebacker turned fullback is fully embracing his new role.

"I feel like I’m Zeke’s big brother just because I have to keep him clean," Smith said. "I mean it’s a little different than making tackles every week because you don’t get as much glory, but I’ve never really been the glory dude. I’ve always been under the radar, so all of that is just extra if I do get the ball. I enjoy lead blocking and especially when he’s balling, I mean we ball. Me doing my job is going to help him."

"I’ve had people ask me, ‘Do you know who Moose is?’" Smith said of Johnston, who helped Emmitt Smith become the NFL’s all-time leading rusher. "Then I see that wall, that Pro Bowl wall [inside The Star] and I mean it’s just motivation, especially with the way our mentality is on offense. We’re just going to run the ball, so I mean as a fullback we lick our chops when we get to run the ball. That means we get some love. Getting to hit people, it’s always cool."

Twitter mailbag: Will Rolando McClain ever play another down for Dallas?- Todd Archer, ESPN
We go back for a second helping of Archer's Twitter mailbag, in which Archer leaves no doubt about McClain's future in Dallas.

Let me answer your question this way: I think there is a better chance I play for the Cowboys in 2016 than Rolando McClain does. What have we heard from Jason Garrett over and over and over again? Accountability. Chemistry. Why would the Cowboys want to add a player who is accountable to no one even if he is athletically gifted? He is suspended for another four games but I think many on the staff and in the locker room have closed the door on McClain's return. I can't say Jerry Jones has because he sees the positive in every scenario, but his return would undercut all that Garrett has been able to successfully sell this year.

It would essentially be illegal & impossible for 2016 #Cowboys to trade #Romo - media saying otherwise are conman or dumbasses https://t.co/ffgRJTJQeB

Here's a list of people Fisher suggests you unfollow: