Latest Cowboys headlines: Teammates would welcome back DeMarco Murray; Romo's back no longer an issue; If available, do Cowboys have to take a franchise QB?

"No. I'm signed there for the next four years. I don't know where that story is coming from," Murray said on PFT Live. "It's a little crazy. Every week I feel like there's something new. It's a little weird. I can't worry about what people are saying. I'll just continue to work hard. I'm signed for four years and I'm committed."

Tony Romo asked on @nflnetwork about DeMarco Murray. Smiled and said, "Well that would be tampering so we don't even talk about that."

Tony Romo: I'll help any QB Cowboys add this offseason - NFL.com
Dallas Cowboys QB Tony Romo addressed the possibility of the club drafting his eventual replacement in the 2016 NFL Draft, when asked about the Cowboys' future at the position by FOX Sports' Colin Cowherd.

"If someone's good enough to take your job, you're probably not as good as you thought," Romo said. "I've been a backup, I've been behind guys who were good players and I learned a lot from them. I'm going to do the same for whoever comes in. We get a free agent, I'll do the same and help him. We draft a kid, I'll do the same. At the end of the day, I feel very comfortable and confident in (my) skills and I'm obviously chasing a Super Bowl. That's what I'm trying to bring to Dallas."

You can watch a portion of the interview here, which also features this quote from Romo. 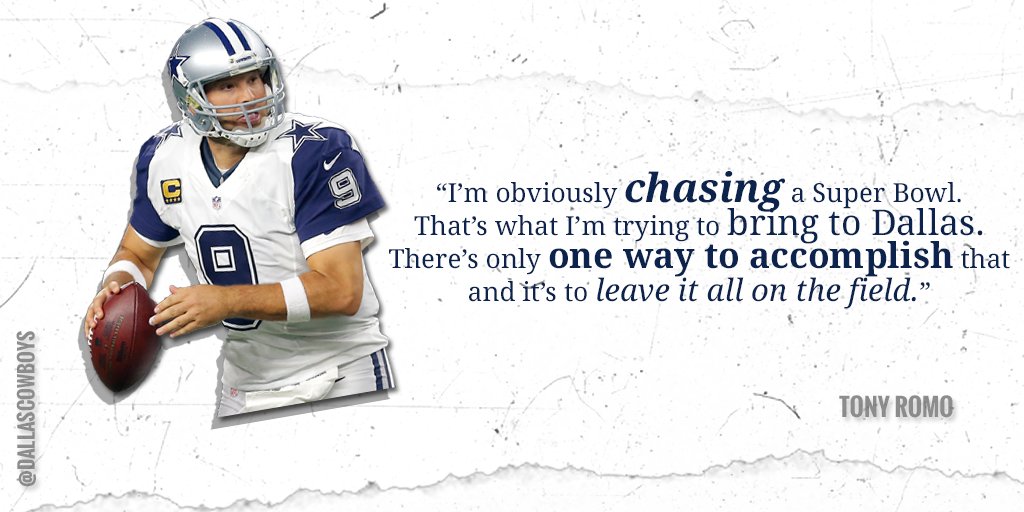 Marshall Faulk: Romo's "value to the team is unbelievable" - SportsDay Staff
In a recent chat, Faulk talked about Romo's importance to the Cowboys.

If you're gonna ask Tony Romo to play the game a different way ... I think this is the first time that Tony Romo really understands what he means to this team and his health. All that running around stuff and buying time. You can't do that. His value to this team is unbelievable. And if he's gonna continue to play like that then they need to draft a quarterback and have somebody sitting behind Tony that's capable. I was surprised by what Kellen Moore did. I was impressed with what the kid came in and did.

Romo's back no longer an issue - David Moore, SportsDay
How Romo will proceed to ddress his fractured collarbone is making all the headlines this week, but lost amid all the speculation about which procedure will be done when on the collarbone is this little tidbit:

He's also confident the back, which required two surgeries and limited him after the 2013 and '14 seasons, is no longer an issue.

"The back's not going to keep me out anymore,'' Romo said. "I think the silly stuff is now still talking about the back because it's actually stronger than it has been. That part of the game, it seems as if I'm young again. I understand that other people want to talk about it who have had back injuries. Some of them were probably either worse than mine or different.

"For me, the back is the furthest thing from my mind. It feels as strong as anything.''

Troy Aikman: If Cowboys feel there's franchise QB at No. 4, 'I don't know how you pass that up' - SportsDay Staff
Aikman believes a franchise QB will be too much to pass up for the Cowboys.

"If there is a player who...is what you view as a franchise quarterback, I think you have to take that guy," Aikman told profootballtalk.com's Mike Florio. "Jerry [Jones] is all in now and certainly he feels Tony Romo can play another three or four seasons, but I liken it a little to the Green Bay situation when the Packers took Aaron Rodgers."

"To me, if you have a chance to add a franchise quarterback, and if you're going to [be] the team that Jerry thinks they are going to be, then you're never going to be in this [draft] position again, at least not anytime soon."

"To have a chance to set your team up for 15 years, I don't know how you bypass that."

LaQuon Treadwell is this draft's Dez Bryant - Bob Sturm, SportsDay
Sturm doesn't think the Cowboys will draft Treadwell, but likes him as a potential target anyway.

He is fantastic and although I am not sure the Cowboys want to go WR at the top of the draft, this would give them another game breaker on an offense that might not have any after Dez. Think about it, last season when Dez was out - although they blame everything on the poor backup QB play - there was almost nothing special about the weapons on the offense making plays whether that be RB, TE, or WR.

If all of your special play-makers on offense are just Bryant and your 36-year old QB, maybe taking an explosive WR is not that crazy of an idea.

The former Ohio State Buckeyes star made that clear on Friday when he was asked for his ideal draft destination during an NFL Now interview from Super Bowl 50:

"The Dallas Cowboys (are my pick). I want to go play behind that great offensive line they have down in Dallas," Elliott said.

Brian Baldinger: Why RG3 makes sense as a backup for Tony Romo - SportsDay Staff
NFL Network analyst Brian Baldinger joined Shan and RJ on KRLD-FM 105.3 The Fan and talked about how Robert Griffin would fit in Dallas. Frankly, there's not much more here than "I like the guy," but it makes for a nice headline.

"I did a lot of his games at Baylor when he was the Heisman Trophy winner. I know the game is important to him; I know he's a very smart. I know he could take the coaching. I think that what has happened in Washington is unfortunate. But I think that he's been humbled to a degree, which is good. He's gonna come out firing now, man. He's gonna get a second chance in this league and he should. I would take RG3 because the character is much better and the demons aren't there like they are with other guys."

Marinelli wants more Takeaways - Todd Archer, ESPN
Rod Marinelli knows takeaways are a huge key to winning, and his unit was not very good at last season, when the Cowboys had just 11 takeaways, a gigantic drop from the 31 the year before.

"Not good enough," Marinelli said. "It’s everything. I think the hustle, the effort, the hitting, all those things were good. We didn’t finish games like we should have, but the takeaways are the No. 1 thing in football."

Countries with the most NFL fans outside the US - AmericanFootballInternational.com
The NFL announced earlier this week that the Texans and Raiders would play a game in Mexico City this year. With the game, the NFL caters to its largest foreign fan base, and looking at the chart, you've got to wonder about the NFL's fixation on the United Kingdom as a venue for international games.

Johnny Manziel’s agent dumps him - David Smith, ProFootballTalk
Time for one last Hail Mary to save Manziel's football future. How about an Affluenza defense for Johnny? Because things are rough if even your own agent has had enough of you.

In the wake of the latest allegations that Manziel abused his girlfriend, agent Erik Burkhardt released a statement this morning saying he will no longer represent Johnny Football.

Johnny Manziel won't join Dallas Cowboys for 2016 season - J.J. Taylor & T. Archer, ESPN
The Cowboys have eliminated the possibility of adding Manziel to their team and amazingly failed to share this with BtB immediately. Very irresponsible of them.

At a personnel meeting after the 2015 season ended, the Dallas Cowboys all but closed the door on the possibility of adding Johnny Manziel in 2016, multiple sources told ESPN. According to sources, Manziel's name was one of several that came up in the internal meeting, and it was met with the same reaction it got during the NFL draft in 2014, when the Cowboys passed on the troubled quarterback in the first round.

Those meetings occurred before Manziel allegedly struck his ex-girlfriend several times during an incident last weekend at a downtown Dallas hotel. Despite the allegations, Manziel wasn't charged by the Fort Worth or Dallas police departments, which said Thursday that they consider their investigations closed.

We'll close our news post today with an Ode to Johnny, courtesy of Andrew W.K.