Sorting Through The Noise: What Combine Numbers Matter For Each Position

Draft picks are the most valuable resource an NFL team has to build its roster. In trying to find the best talent, the numbers prospects put up at the Combine are important - but only if you know which ones to look at for each position.

Share All sharing options for: Sorting Through The Noise: What Combine Numbers Matter For Each Position

The Dallas Cowboys have nine draft picks in the 2016 NFL Draft. As they try to recover from the Great Debacle of 2015, it is imperative that they use these wisely. One of the things that they, and all NFL teams, have to use to try and figure out which players they want to take are the numbers posted by the prospects at the NFL Combine and the pro days held at colleges across the nation.

However, there is a wide degree of opinion on just how much the numbers generated by the Combine (I refrain from using a reference to the apparel worn during this event) actually mean. Some see them as largely meaningless, while others think they can be very important in figuring out how to slot players on draft boards. Despite a certain misconception about them, opinions are not really worth anything without some data and analysis to back them up.

Well, the article explains it quite well. Just suffice it to say that a lot of people who analyze the NFL, including our own OCC, use this as one way to determine just how valuable players are.

But admittedly, Lotter's work is a bit numbers-heavy. It does look like he proves his point well. If you are not really into wading through all the calculations and a whole bunch of charts in the pieces, here are the main points of interest.

First, he states right up front the conclusions he came to from all his work.

These are some useful guidelines, but a caveat or two are probably in order.

He states that height is less important than weight, but in the case of the Cowboys, they also seek a certain profile at certain positions, particularly wide receiver and cornerback, where the height, or perhaps more accurately, the length of players is quite important.

Above all, no matter how accurate some Combine numbers are, the video of the player in action against real opponents is always more important. Some things do not show up in raw measurements, such as how well a running back finishes after contact, or the real catch radius of a wide receiver. A long-armed, tall player who still body catches is not going to be as valuable as that guy who can pluck the ball out of the air while fully extended.

Having said that, how do the various measurements correspond to particular positions? In the second part of his series, Lotter includes a couple of excellent charts to help see this. In the first, he uses a color code for each element of the combine. The lighter the color, the more significant the number is for that position. 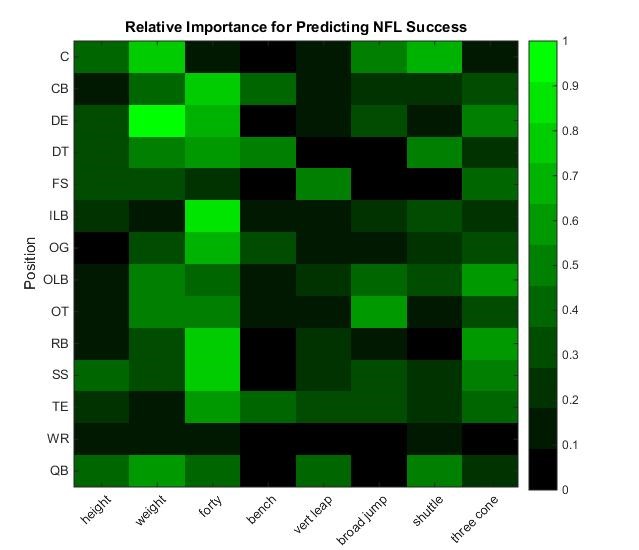 The one really amazing thing about this is that for wide receivers, you may as well throw out all the numbers, because the correlation to future NFL success is pretty much nonexistent. With WRs, the real evaluation has to fall almost entirely on what the scouts see on video. This is something to keep in mind with the reports of the disappointing 40 time Laquon Treadwell put up at his pro day. It likely shouldn't matter for him. If some teams should downgrade him because of his relative lack of straight line speed, someone else is going to get themselves a bit of a steal.

Lotter also did an even simpler version of the chart, with the numbers that you should pay attention to in white, and those that have little to no relationship to the quality of the prospect in black. 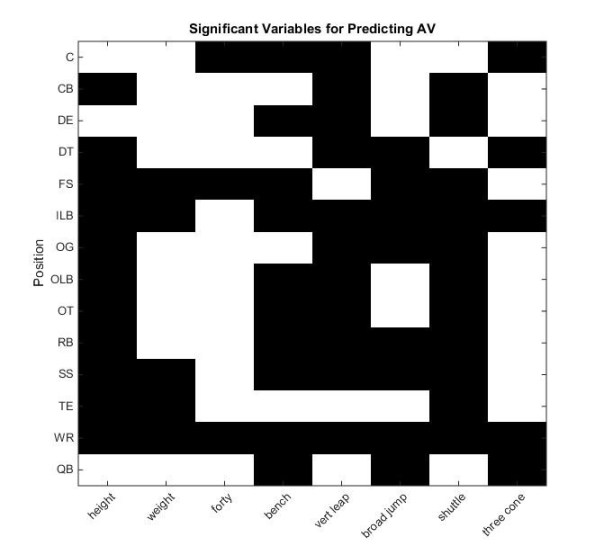 One thing that is a bit surprising here is how much more indicative the three cone drill is than the shuttle.

This is just a skimming of all the data and research involved, but for those of you who really get into mock drafts and rating prospects, hopefully it can be useful in sorting out who is really best at a given pick. It is just one tool, along with things like the SPARQ score, but it looks like a good one.