Someone has done the math. Free spending in free agency is for losers.

Share All sharing options for: Cowboys Not Likely To Spend Much In Free Agency - And Fans Should Be Glad

NFL free agency is almost here. The unofficial start was during the NFL Combine, when the rules are largely ignored as teams talk to agents to sort out the landscape, at a minimum. Now we will all be waiting to see who will be signed by the Dallas Cowboys. Names like Lamar Miller and Mario Williams are being bandied about to fill some of the more glaring needs. But recent history has shown that the Dallas front office does not like to spend a lot. The Cowboys have established a pattern of sitting out the first rush of big-name signings and waiting for things to settle down. Then they will look for more affordable contracts to plug the holes. At most, they may try to complete one or two sizable deals, but they may forego them completely. (Our own Michael Sisemore has a nice post up sorting through some of the more prominent rumors and trying to apply a little logic to them.)

This can create a little frustration. After free agency is mostly done, there will be a variety of articles about which teams "won" free agency. The teams that grab the big names will be proclaimed as the winners, and lately, the Cowboys have not been included in that group.

As it turns out, that is a very good thing. After a few seasons, there are always many articles like this one about the Jacksonville Jaguars.

The success the Jaguars have had drafting offensive guards the past two seasons will allow them to turn the page on a significant failed free-agent signing.

That's the issue that arises again and again. Top dollar free agent contracts turn out to be woefully overpriced more often than not (see Brandon Carr and Greg Hardy). The evidence is clear. Taking the plunge in free agency is usually for suckers.

This is not just opinion. A writer named Warren Sharp has done some impressive research, appropriately titled "Winning NFL Free Agency is a Myth". He finds an amazing correlation between spending big money and losing football games.

He has some excellent charts in the piece, especially this one. 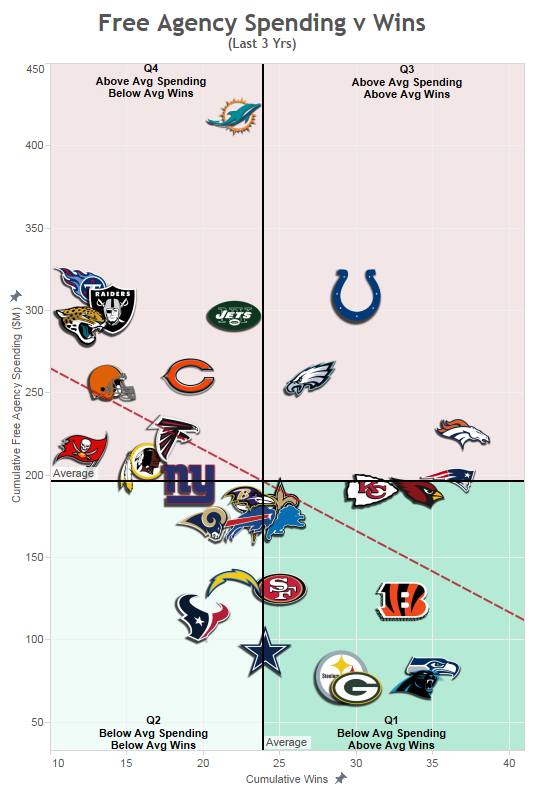 Notice the teams with the best results over the past three years, the period examined for this article: The Seattle Seahawks, Carolina Panthers, Green Bay Packers, and Pittsburgh Steelers. And, despite being just .500, the Cowboys are not far from those successful teams.

The NFL is a league of copycats, where teams seeking to improve themselves try to emulate the ones who do the best. What is somewhat surprising about this chart is not the teams that seem to have it figured out. It is that so many are still throwing big dollars at players who are no longer wanted by their old teams.

Sometimes, players become free agents because of cap constraints rather than performance, but this is also a sign that they are not handling their roster correctly. The Cowboys have seen some issues with this in the past, most notably DeMarcus Ware, who went on to get a ring with the Denver Broncos. They are proof that sometimes spending a bit more in free agency can work out, at least in the short term, but the teams in the upper left quadrant show that spending a lot on free agents is most often a sure path to futility. The Cowboys have recently gotten their own salary cap house in order, and had to make no decisions based on that for this year. Now they go into free agency with enough money to round out the roster prior to the draft, but will certainly not be going after many big names, if any.

It may lead once again to complaints and regrets about players that get away, but in the long run, the Cowboys are following a plan that has the best chance of leading back to the playoffs. Yes, it would be nice to get some of the top free agents for this season, but in the NFL, past performance is absolutely no guarantee of future success with players. Free agency is likely to be a rather dull affair in Dallas in the next few weeks, as it will for those teams mentioned above that have very good track records on spending little and winning a lot.