Latest Cowboys headlines: rookie-led Cowboys offense will be a challenge for Giants defense; why Jason Witten is nightmare Giants can’t wake up from; no-name pass rush gets new nicknames.

Giants DC Steve Spagnuolo under pressure - Sheil Kapadia, ESPN
Kapadia takes a look at the biggest questions going into Sunday, and one of them is about Spagnuolo.

26.6: The average rank of Steve Spagnuolo's defenses the past five times he's been a head coach or a defensive coordinator, per Football Outsiders' DVOA rankings. He's back for another season with the New York Giants, and the team spent $105.3 million in guaranteed money on cornerback Janoris Jenkins, defensive lineman Olivier Vernon and defensive tackle Damon Harrison. Spagnuolo's defense finished 30th in DVOA last season, but the decision-makers clearly felt the issue was talent, not coaching. For the Giants to win the NFC East, Spagnuolo will have to prove them right.

Cowboys Opening Season With Rookie Backfield For First Time Since 1969 - Jonathan Auping, Dallas Cowboys
It's been a while since the Cowboys started a rookie backfield, but it went really well the last time.

In 2016 the Dallas Cowboys will start a rookie at quarterback and running back to open the season for the first time since 1969 when Roger Staubach and Calvin Hill were the starting backfield.

The Cowboys beat the St. Louis Cardinals 24-3 in that game. Staubach threw for 220 yards and a touchdown. Hill rushed for 70 yards and coincidentally threw a touchdown as well in his only pass attempt of the game.

It began a long and beneficial relationship. Staubach went on to play 11 seasons with the Cowboys, winning two Super Bowls and playing in six Pro Bowls. Hill played six seasons for the Cowboys including four Pro Bowls.

This has nothing to do with Eli Manning’s passing abilities and the Giants offense, and everything to do with the Dallas Cowboys' veryyyyyyy sllllooooowwwww pace of play. With a talented offensive line and a mediocre, suspension-riddled defense it wishes to keep off the field, the Cowboys take their sweet time and play a keepaway style of offense. The Cowboys have led the league two years in a row in slow pace with an average 29.95 seconds per play on offense last year.

Put another way, Manning probably won’t have enough opportunities to abuse the Cowboys’ defense and hit that near-300 mark. In last year’s season opener between the Giants and Cowboys, the Giants ran 60 plays and Eli completed 20 of 36 passes for 193 yards. In the second meeting in October, the Giants ran only 49 plays as Manning completed 13 of 24 passes for just 170 yards. Dallas faced the second-fewest pass attempts in 2015 with 506 and allowed 227 passing yards against (fifth fewest). Even with an improved Giants defense (it can’t be worse than last year), I don’t see Manning cracking the high 270’s.

This is the fourth time in the last five seasons Dallas has opened against the Giants and the eighth time overall. They are 8-0 in those games. The Giants, who missed the playoffs the last four years under Tom Coughlin, are now coached by former Packers assistant Ben McAdoo. Management spent $200 million in contracts to load up the defense with big-name free agents, defensive end Olivier Vernon, defensive tackle Damon Harrison and cornerback Janoris Jenkins. It’s up to coordinator Steve Spagnuolo to put it all together. Expect him to blitz the heck out of Dallas’ rookie backfield of Dak Prescott and Elliott.

Even before the Tony Romo injury, I felt 2016 was either a division title or disaster year for the Cowboys. Legitimate Super Bowl contender? No, not with that defense and all its suspensions and general lack of talent, but a 9-7 division winner in a weak division. Then with the way Dak Prescott played in the preseason, I still felt confident enough to give the Cowboys the East. Romo should be back eventually, unless Prescott plays so well that it’s over for Tony in Dallas. That would be a damn shame, but I honestly can see it happening. He’s in a nice situation with the offensive line, Ezekiel Elliott and Alfred Morris, Dez Bryant (please stay healthy) and Jason Witten. Dallas was a likely regression candidate with last year’s serious injuries (don’t forget Orlando Scandrick, a very good corner) and plethora of close losses. The Cowboys had 9 failed comebacks last year and had four starting quarterbacks.

Stephen Jones: Cowboys will be better on defense than people giving us credit for - SportsDay
Stephen Jones joined Ben and Skin on KRLD-FM 105.3 The Fan where, among other things, he talked about why he's excited about this season.

Obviously picking Ezekiel there with the fourth pick in the draft, we decided that if we could really beef up the offense, control the football, help Tony out, take some pressure off him in terms of being able to run the ball, control the clock it would also help the defense. The beneficiary of that is also Dak Prescott.

I think ultimately we'll be better (on defense) than people probably are giving us credit for. We really like our football team. I think they're battle tested. I think we're ready to play the Giants. I think this team really has a chance to have a great year.

"Now it’s kind of an 'eight equals one,'" Marinelli said, referring to his preferred eight-man rotation of tackles and ends.

"You can’t rush as a Lone Ranger. You can’t do your own deal. If you rush together, knocking down rush lanes and contain, all those things, and part of working together is never giving up on a rush."

"They’re all hard workers. Whatever they’ve got, I know they’re going to give it," Marinelli said. "We’ve got some young talent there. Now it’s time to put it on display and let’s see us execute."

Final Thoughts: Mayowa vs. Flowers - Bryan Broaddus, Dallas Cowboys
Can Mayowa do in the NFL what Randy Gregory already did in college against Ereck Flowers? Broaddus seems to think so.

I think this is where fans finally get to see what Benson Mayowa is all about as a rush end. His matchup against Ereck Flowers should be a good one for the defense due to the fact that Flowers tends to play off balance and gets overextended. He is a mauler with his technique and if he doesn’t get his hands on the rusher, then it is hard for him to hold them off. The advantage that Mayowa has is his quickness and the slippery way in which he rushes. He is not big enough to go toe-to-toe with Flowers, so he has to play around him and make him reach to block him. Look for Mayowa to take advantage of Flowers to generate some pressure off that right side.

Cowboys confident in their ‘Nickname Defense’ - Charean Williams, The Star-Telegram
Gone are the days of the Golden Cock, but the nicknames remain for the Cowboys defensive linemen.

The defensive linemen had no idea who Rod Marinelli was referring to the first time he used "Ringo" when referring to Jack Crawford.

The Dallas Cowboys defensive coordinator explained that since Crawford hails from London, Ringo Starr seemed a natural nickname. But Marinelli was met with blank stares; only Crawford was familiar with Starr.

"He said ‘Ringo’ and nobody knew who that was," Crawford said. "It’s just for some reason that name has stuck throughout this whole organization. I’m OK with it. As long as they keep calling my name, I’ve got a job, right? They can call me whatever they want as long as I get to play."

Why Jason Witten is nightmare Giants can’t wake up from - Bart Hubbuch, New York Post
Pundits have speculated about Witten's imminent decline for years. Not so in New York, where pundits and fans alike are keenly aware that "in a wheelchair in 30 years, Witten will still be open over the middle vs us." Here's Hubbuch's take on Witten.

Not only is Witten one of the most durable, ageless and prolific tight ends in the history of the game, but the longtime Cowboy seemingly saves his best for Big Blue and made a career out of torturing them.

And if you’re the Giants, Witten is a guy you often feel like you never can stop. He has been ruthless in his career-long destruction of the Giants, catching 133 passes for 1,397 yards and 13 TDs in 26 regular-season games against them. The only 2-point conversion of Witten’s career? You guessed it, against the Giants.

The improvement he showed from early in training camp to the end of training camp was incredible. In walkthroughs he was slow to make his reads as he learned the system. He was OK in practice but nothing great. But after Kellen Moore got hurt he was a different player. Maybe it was the extra practice time with the first teamers. Maybe it was just a comfort level.

His accuracy, to me, is a great trait. I don't expect him to be as accurate in the regular season as he was in the preseason, but he puts the ball in positions where the receiver can do something with it after the catch. That might sound like an easy thing to do but not a lot of quarterbacks have that kind of touch, especially young quarterbacks. There will be some mistakes. He can't be this perfect. But the Cowboys believe he will make plays for them to win games.

Any questions about which game America is watching today? - 506Sports.com 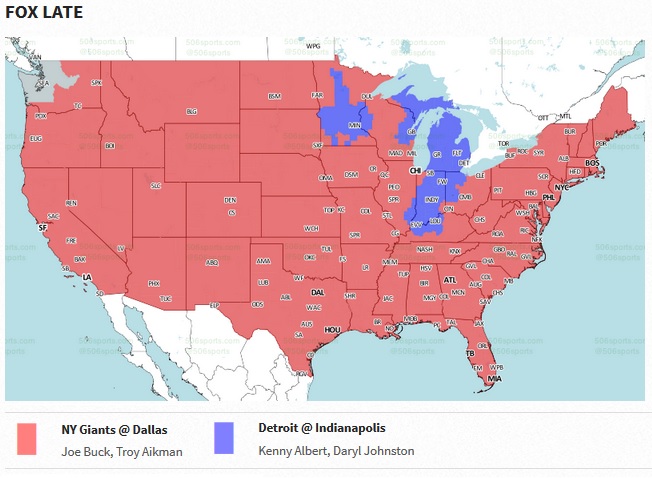