Because of the brevity of the NFL season with just 16 games, every game carries an inordinate weight in determining a team's playoff odds, so improving to 1-1 is a very good thing.

Isn't it too early to look at playoff chances after just two weeks? Not really.

Because of the short NFL season with just 16 games, every game carries an inordinate weight in determining a team's playoff odds. That brevity of the NFL season also means that if you follow up a season-opening loss with more losses, you'll be out of the playoff race pretty fast, as the Redskins will surely realize this week. Similarly, if you open the season with two consecutive wins, you've already created some separation en route to the postseason.

The Cowboys lost their season opener, and had they lost in Washington, they'd have been staring at some pretty long historic playoff odds. We saw in last week's playoff tracker that since 2002, only 12 of 116 teams (10%) that opened the season with two consecutive losses eventually made the playoffs. Lose the game after that and you can start looking at mock drafts for 2017, because not one of the 69 teams that started the season with three losses made the playoffs since 2002.

So what happened to the Cowboys' playoff odds after their win against Washington? According to 538.com, climbing back to 1-1 may have had the biggest win leverage of any win the Cowboys will have this season. According to the 538.com projections, which are based on data since 1995, teams that start the season 0-1 end the season with 2.5 more wins when they win their next game than when they lose their next game. And those 2.5 wins are the biggest win leverage possible at any point in the season, as 538.com's graph illustrates: 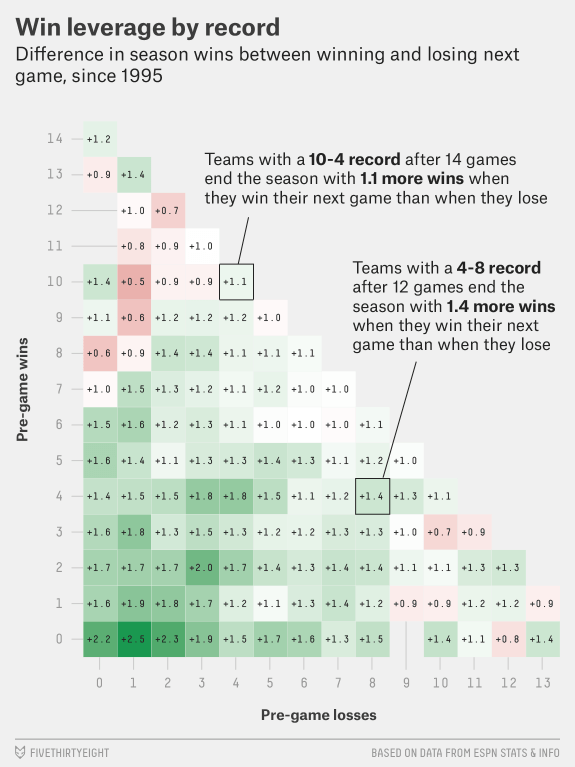 For now, the Cowboys are back in the playoff race, but they are not out of danger yet. Because 538.com also looked at the average season wins with a given record, and it turns out that teams with a 1-1 record historically have ended up with 8.2 wins over the entire regular season.

The Cowboys next face the Chicago Bears and then travel to San Francisco in Week 4, and after the first quarter of the season, they could have a 3-1, 2-2, or 1-3 record. Here's what 538.com projects as the regular season win total for each of those W/L records:

We'll continue monitoring the Cowboys' playoff chances every week, and it would sure be nice if we could talk about a 2-1 record after next week.