"In Year One we just scratched the surface. We're just getting started. I know we've been hitting these [offseason] workouts, and we're just excited for what we can be as a team."

Cowboys' Will McClay on Taco Charlton vs. T.J. Watt, why Dallas ended with all Power 5 draft picks - SportsDay Staff
Will McClay recently joined 103.3 FM and explained why the Cowboys were higher on Taco Charlton than T.J. Watt, even if a small percentage of Cowboys fans may still have a hard time dealing with it.

I think they were close talent-wise. I think when it comes down to it in the first round - T.J., two years as a defensive player, what he's done is phenomenal based on his coming in as a tight end and all those things and he had phenomenal numbers - but in the first round, you're trying to hit at least a double.

When you talked about T.J., he was a projection - thinking he could do it - but he was a 3-4 outside linebacker in a lot of our minds. And at the end of the day, it's very difficult to find the right defensive end that has all the measurables that you look for, that's got to be able to play in those different spots and different alignments that a defensive end does, as well as, affect the passer.

In that regard, we felt like Taco had upside. He played four different schemes, different positions, hit his stride late in the season. Loved the tools that we saw and his ability to play left end, right end, he can play three technique. And in this league, the more versatility you have helps us and we feel like he's going to add something to us.

"Taco Charlton, Jourdan Lewis, two great young men because they truly want to be good," Harbaugh said. "They’re serious about being good. And they’ve been put to the test. They’ve had to do the hard stuff. Football’s not an easy game. It’s a hard, rough, tough sport and you’ve got to pay the price when you get on the field. Talk about honesty. It’s, are you good enough or are you not? And you’ve got to be prepare for when you’ve got the opportunity to do that. Both Taco and Jourdan will do a great job because they like football."

"They like to practice football, they like to do the dirty, tough stuff and they’ve got great courage great physical skills and they’ve done it in games," Harbaugh said. "The things I like about both of those guys: you’re not just looking at guys who have potential. They’ve realized their potential."

"This Lewis kid is more of a nickel corner. He’s a little bit smaller in weight (188 lbs, 5’ 10"), but he’s a quick-footed athlete who was recognized as the best defensive back in the Big 10 Conference. He has ‘vision’. He can run with a guy, so he’s watching his guy, but he also sees the ball."

"I really like him. Everyone is kind of looking at him as a nickel player (in the slot) because he’s good at blitzing. He’s very quick-footed, and he’s also very physical. He’s a little small, they say. But in reality he’s 5’ 11". If he were 6’ 0" everyone would say he’s got the perfect height. He’s 5’ 11 and ¾" , so he’s not that little. I think he’s an outside corner first, and a nickel (interior/slot) second. That’s great because he has the ability to play both positions. And he could even be a cover safety. The way the league is today – with 4 receivers, including tight ends – you need safeties that can cover."

"And the thing that sticks out about both Lewis and Awuzie is their football character. They love to play the game."

Noah Brown is a really interesting player in the seventh round there at 239 because, to me, this says a lot. Noah Brown is not only the type of player, a big-bodied receiver, he really reminds me of Dez Bryant as a route runner with the inside routes, the slants, going to get the football, high catch radius.

... To me, this is a guy that's a nasty blocker, too. When you got a guy with size on the outside that can block when you put him in the game the things [like] trying to get the edge, the crack tosses, the balls going to the outside with Zeke [Ezekiel Elliott]. Those are some really, really positive things.

I'm just interested to see how the changes are made whether it's Lucky [Whitehead] and Brice Butler and things like that. Do they bring in these two younger guys and let them [play]? Obviously they thought enough of them to draft them. They're very talented football players.

... The top of the draft will be defined, but the middle of this draft will be interesting because of where they feel like maybe they can replace some players that are backup-type guys.

I think they're pretty happy with their draft. I think they never in their wildest dreams thought they were going to get Jourdan Lewis in the third round. And Xavier Woods, they were talking about him in the fourth round [and] then get him in the sixth. I think it worked pretty well.

Marquez White: here's a guy who started at Florida State [and] played in a national title game. I think that was a real good late-round pick. The other thing I liked about it they took those two defensive tackles. If you're going to miss late, miss with size. These are two big guys that can fit in Marinelli's rotation.

I think by and large they were quite happy with their picks. I don't think there was any, 'Woe is us. We couldn't get the guy we wanted.'

Rick Gosselin: Why Chidobe Awuzie was the best pick the Cowboys had in this NFL draft - SportsDay Staff
In another excerpt from his appearance on 103.3 FM, Gosselin positively gushes about Awuzie.

I like [Chidobe] Awuzie. He fits [with] what Rod Marinelli does at cornerback. When they won Super Bowls in Tampa and they were competing for Super Bowls, the rush came from the front four and what you needed was seven guys in coverage who would arrive with anger. See the ball, hit the ball.

This guy was the best tackling corner in football, very much like Brian Kelly who started on that Super Bowl team for the Buccaneers. This is the type of guy that fits. He [Marinelli] doesn't want finesse corners. He wants physical corners.

This guy [Awuzie], I thought, was the best fit. And I think that's why they drafted him because he is a tackler. He's a guy who can come in off the edge. Brian Kelly and Ronde Barber both had sacks off the cornerback position on that Tampa teams. I really like that particular pick.

"For about 35 minutes after that last pick of the seventh round, things got extremely chaotic," Jones said.

One after another, three teams that had interest in signing him as an undrafted free agent were on the phone. The Dallas Cowboys. The Seattle Seahawks. And the soon-to-be Las Vegas Raiders.

"First one, then the other," Jones said. "Pretty soon, it was hard to think who said what, and I wanted to be dialed in and focused on what they said."

While not getting drafted may sting, it gives the player some leeway and power when it comes to signing an undrafted free-agent contract. Jones and his agent can look at the rosters of various suitors and try to calculate where he will have a better chance of making a roster. Jones finally decided to go with the Cowboys. He will be heading to Texas later this week for rookie minicamp.

"They didn't draft any linebackers," Jones said. "To make it in the league, though, I'm going to have to do well on special teams."

SI's Peter King: Dallas might still be favorite to host 2018 NFL draft, but decision might require a 'triple take' - SportsDay Staff
King joined the Rich Eisen Show recently and talked about the Cowboys' chances of hosting next year's draft.

Peter King: Well, what I heard over the weekend is, Rich, is that they were going to Dallas next year. And that now they have to really give it a triple take and say, 'Do we really want to not do this again. This is incredible.' But I think there's some people also in the league who say, 'OK, Chicago was really good. Philadelphia was incredibly good. Now, won't other teams, won't other markets, won't other cities also be incredibly good. Let's go see.' So Rich, I really don't know. I think that there are a lot of people at the league who thought that they were going to Dallas next year and now I think they have to give it a legitimate going over.

Someone Updated The Eagles Wikipedia Page After Drew Pearson's Savage Pick Announcement - Daily Snark
Pearson owned Philadelphia on the second night of the draft and the Eagles team Wikipedia page was updated not too long after: 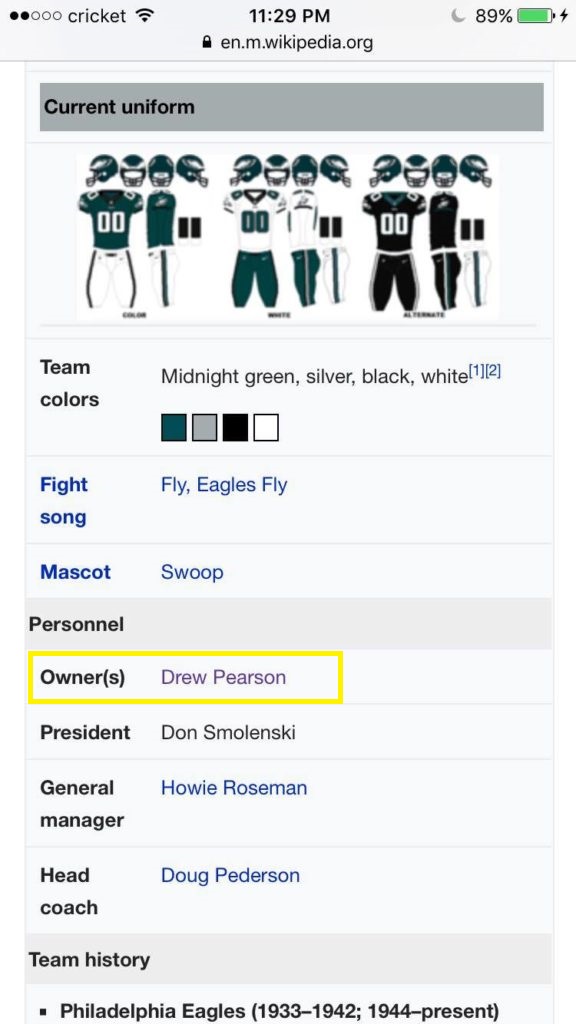