Demarcus Lawrence set a record* this year! Did you realize that?

160. That's the number of "sack yards" Demarcus Lawrence tallied with his 14.5 sacks in 2017, according to ESPN. The number didn't mean much to me when I saw it on that page, until I noticed that Chandler Jones was second in the NFL with a firmly trailing 113 sack yards. This, in spite of the fact that Jones managed 2.5 more sacks than Lawrence. That, in spite of the fact that nobody else cracked 100 sack yards in 2007. Hmm...

Now I had to explore! So I began clicked through previous seasons, all the way through 2004 (when I saw that ESPN's data no longer included "Sack Yards"). What did I find? Let's tally up the results and see:

In fact, it gets even better. Take every player with a top 10 Sack Yards season for a give year over this period and determine their "Sack Yards Per Sack", and Lawrence tops that list too with 11.0! Next up are a couple of 10.4 seasons, and just six seasons crack 9.0. Also of note is that there is a clear linear relationship between sack totals and yards per sack; the more sacks you have in a season, the harder to put up a high Yards Per Sack figure (which makes sense, given that a greater sampling of sacks will generally lead to a regression to the mean for yards per sack).

If you don't quite follow that last part, here is a plot of the seasons cited (130 total seasons) of Total Sacks to Sack Yards Per Sack: 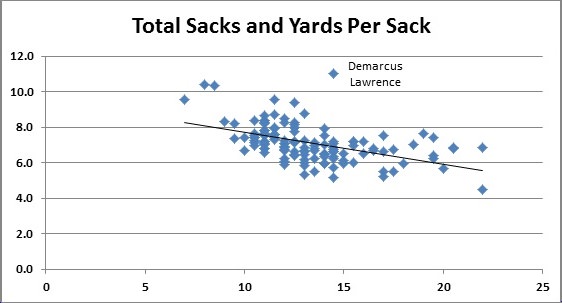 As you can see, every single point falls into a fairly tidy band around the line of best fit, with the range above the line being a bit higher than the range below the line. That is, every point but one - Lawrence's, hovering like a great deity above a mass of demigods (I couldn't call these excellent seasons "mere mortals", but what Lawrence has done is in a class of its own). How about that?

This "record" comes with a couple of caveats (hence the asterisk in the title and opening line of this post). First, Sack Yards aren't exactly an official NFL stat, so these figures come with a grain of salt. To counter that, keep in mind that modern NFL recordkeeping does a pretty good job of taking down information, so every sack comes with the yards lost on the play. The stat may be unofficial, but it looks accurate enough (I went back to the gamelogs on pro-football-reference.com and tallied up Lawrence's sacks, and the figure seems just about correct, though it is likely +/- a few yards).

Second, just as how sacks themselves were not officially recognized as a statistic until the surprisingly late date of 1982 (leaving historic sack numbers incomplete), these figures only go back so long. That renders this more of a "local" record than an absolute one. It is reasonably likely that one of the guys near the top of the single-season sack record (my money is on Lawrence Taylor, but I wouldn't be surprised if Derrick Thomas or Mark Gastineau ended up on the top of the pile either) holds the "true" all-time record.

But until someone decides to take the time to comb through the play-by-play notes for the most likely candidates AND discovers a superior figure, Demarcus Lawrence is King of the Sack Yards Hill! Give the man a round of applause.

Or better yet, don't, and keep this close to the vest until Lawrence signs a contract extension. We don't need information making its way to his agent, right?