The Dallas Cowboys have a reputation for being a team that drafts well. Since Will McClay became involved in the team's draft day decision-making the Cowboys have been widely lauded for quality drafts. But do the on-filed results live up to the reputation?

Lucky for us, some of the advanced analytics guys at Football Outsiders have done some heavy lifting and figured out a pretty rational weigh to measure such things. Benjamin Ellinger has contributed a column at FO that looks at ten years of drafting from 2010 to 2019. It's a terrific read and well worth your time. Today, however, we're going to isolate the Cowboys results in particular and the NFC East results in general.

There are basically three metrics we're going to look at:

Here's the raw numbers by team for both 5-and-10-year intervals: 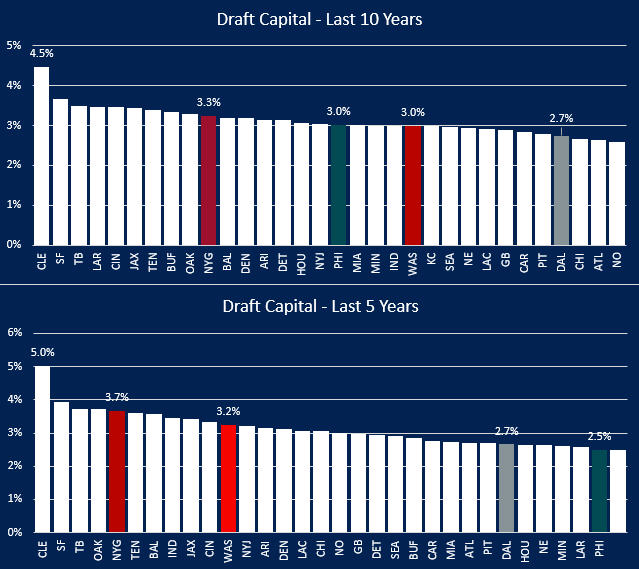 Let's start by making sense of the numbers. The percentages we see are the share of league-wide draft capital that each team possessed over the 5-or-10-year period. There are 32 teams in the NFL so all things being equal every team would have exactly 3.125% of the total draft capital.

We see Dallas has had among the least draft capital, with only 2.74% of the total draft capital. This is a combination of being a fairly successful regular season team and trading away the team's number one pick in 2019.

We also see other things:

Here's the table showing every year for every team, sorted by the 10-year number: 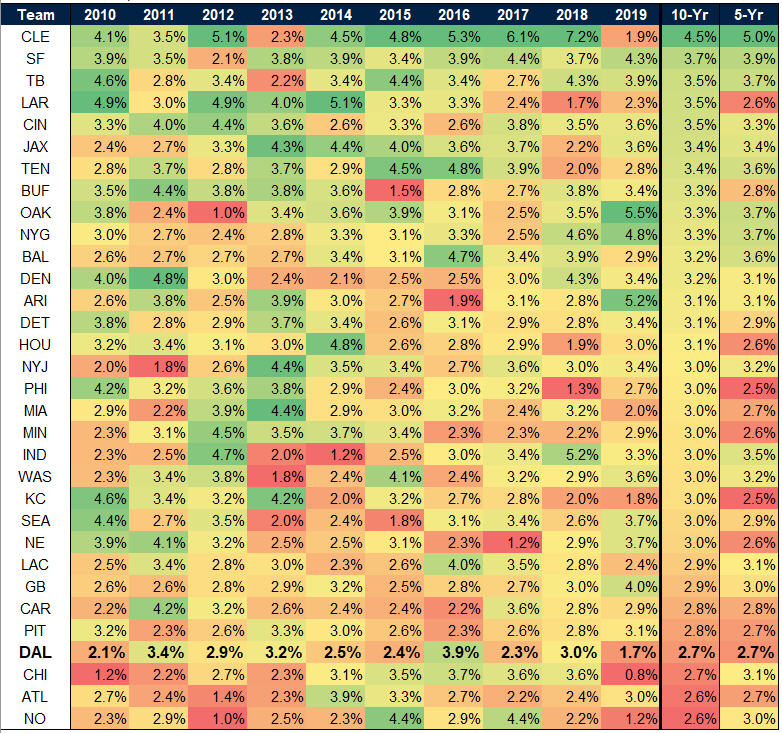 Only three times in the last 10 years have the Cowboys enjoyed above average draft capital:

Otherwise, the Cowboys were consistently working with below-average draft capital. Again, sometimes this was due to trades (2019) but mostly due to the team being an above average team the prior year.

So how did the Cowboys do in terms of extracting value from their relatively modest draft capital? 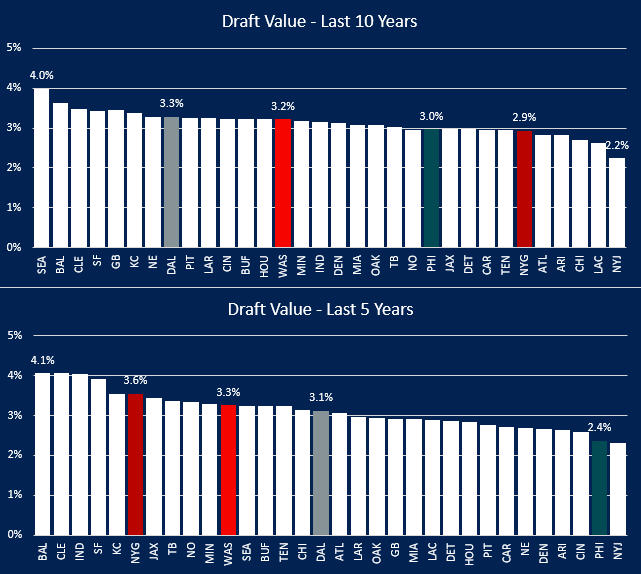 A note on understanding these numbers, which are based upon PFR's Annual Value metric: these are cumulative AV numbers, meaning recent draft results can change. For example, Dallas already ranks first in 2016 draft value due to the production from Dak Prescott, Ezekiel Elliott, Jaylon Smith and Anthony Brown. All four are still Cowboys meaning their future production will continue to add AV to the Cowboys' 2016 draft value. Thus, a team that had a great 2018 draft will see their 10 and 5-year draft value numbers increase. In short, recent drafts will carry additional weight moving forward.

Let's look at the results. First note the accomplishments of the top 10 teams as measured by draft value:

Perhaps most frustrating for Cowboys fans is Dallas joins Cleveland as the only teams among the top ten not to make a Super Bowl appearance - every other team in the top ten at least reached the Super Bowl. The difference is Cleveland had enormous draft capital - tops in the league by a wide margin - and the Cowboys did not. 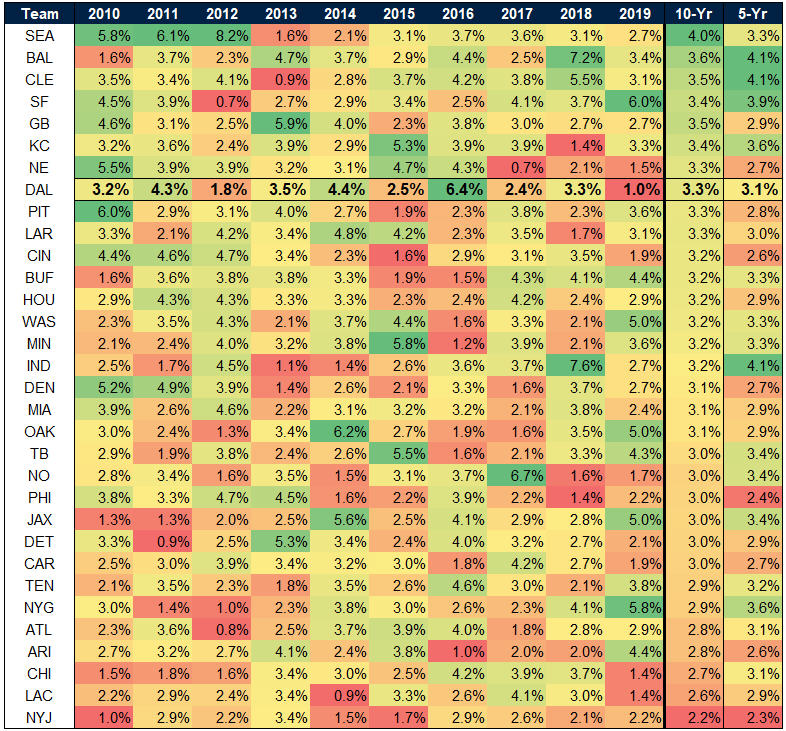 We see the Cowboys have derived above-average value from drafts more often than not. Standout years include:

On the other side of the ledger are four years where the team failed to achieve average draft value:

This is our real purpose today so let's go straight to the 10-year results:

Dallas had the fourth least draft capital and the eighth most draft value over the last ten years so we should expect to see them near the top of the draft efficiency rankings. Again, the frustrating reality here is the correlation between efficient drafting and success: the top eight team are probably the most successful franchises over the last ten years - except for the Cowboys. Very surprised to see the Redskins - one of the worst teams in the league for the last ten (or 15, or 20 or 25 years, take your pick) among the top teams in this metric.

Adding to Cowboys' fan's frustration is the Eagles have only been mediocre at utilizing their draft capital but have been more successful on the field than the Cowboys. This indicates that while the Cowboys have a strong draft pedigree they must be lacking in other areas, specifically:

In many ways, this entire exercise is an indictment on Jason Garrett's coaching regime. Despite being handed top-of-the-league draft talent Garrett, et al failed to turn it into the same kind of success that other quality drafting teams enjoyed.

The last five years also show the Cowboys ranked third in draft efficiency. This, however, is largely influenced by the team's outstanding 2016 draft. Remove that year and the Cowboys are below average in draft efficiency for the remaining four years. Which means for the team to maintain their high ranking they're going to need the 2020 class to stand out. Many believe the Cowboys had one of the best drafts in the league, but many drafts rated high in April turn out to be meh three years later. 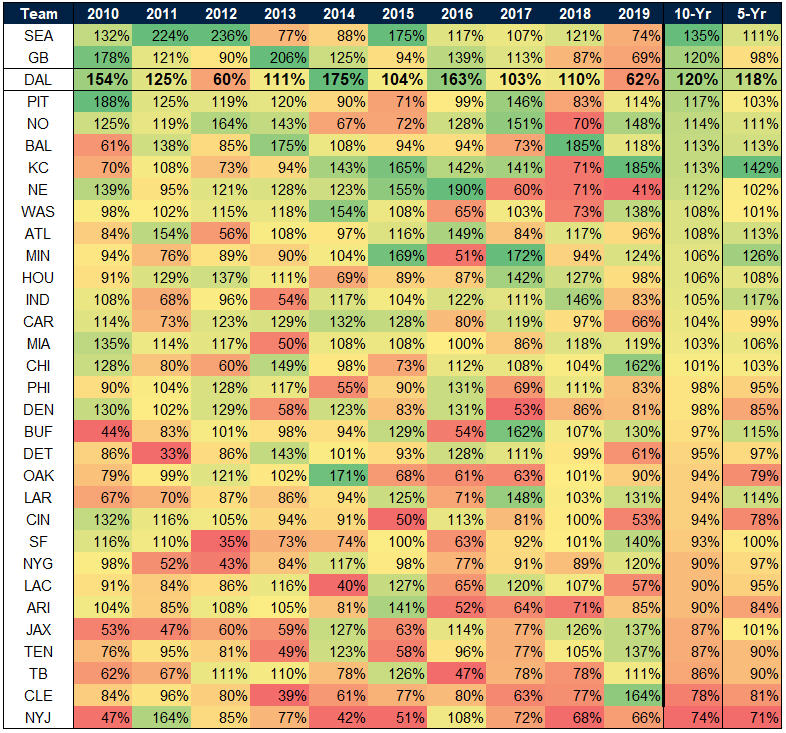 The good news for fans is the Cowboys have an established track record of utilizing their draft capital efficiently. The team's reputation for drafting well has been earned; it's no fluke. The key decision-makers are still here: Jerry Jones, Stephen Jones and Will McClay. Based upon the 2020 draft there's no reason (right now) to think the absence of Jason Garrett has negatively affected the group's ability to continue drafting well. In fact, it's possible McCarthy replacing Garrett will lead to even better decision-making.

The bottom line is this: drafting is still the single most important component to building an NFL roster. Drafts provide cost-controlled players for years into the future and when they contribute during their rookie contracts they provide overall salary cap flexibility, which allows for better roster building.

If the team can simply improve in filling out the roster through free agency and trades and then maximize results from the talent the future should be bright.