The regular season competition is over, but that doesn't mean we stop competing!

First off, congratulations to our 2012 Regular Season champion, CowboyBaby! CB joins BishopWest and Jebediah Flibberbrush in winning the season-long competition. 2012 saw unprecedented participation and weekly 10 for 10 achievers; congrats to all who joined the Hall of Fame! I'd be remiss to not also extend a gracious thank you to Hookerhome for another season of keeping everything running smoothly week in and week out. Truly a blessing to have his assistance in running this as we've expanded. I can't wait til next season to see if we can break 300!

You didn't think the fun was over, did you? There are still eight teams alive and in the hunt for a Lombardi Trophy which means there are still games for you to pick. Contrary to popular belief... ok, personal belief, the NFL season didn't screech to a halt when the Cowboys were eliminated. Although it should have. Regardless, our pick'em contest starts anew for the divisional rounds of the tournament.

It's time to play PLAYOFF SEVEN FOR SEVEN!

Think NCAA brackets here, I need someone to correctly pick ALL 7 of the playoff games. That means that you have to pick the winners of this coming weekends four games, the Conference Championships AND the Super Bowl in New Orleans. If you pick even one game incorrectly, you are eliminated. And to make it all the more interesting, you have to predict all 7 games before THIS Saturday! That's right, just like March Madness. Here's a blank bracket: 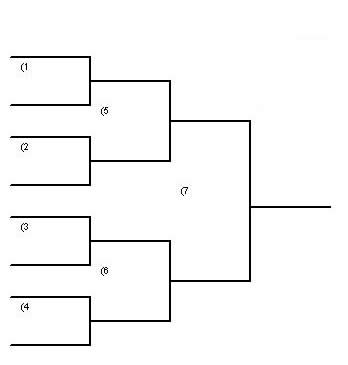 Follow the jump for more details on how to enter.

Here are the remaining playoff games, including this weekend's kickoff times.

Obviously, you must make a Super Bowl Final Score prediction because that will be used as a tiebreaker in case multiple people go Seven For Seven.

Here's a sample bracket, just copy/paste the template then bold the winners from this weekend. Move those teams into the appropriate slots for Games 5-7:

Alright, get those picks in!